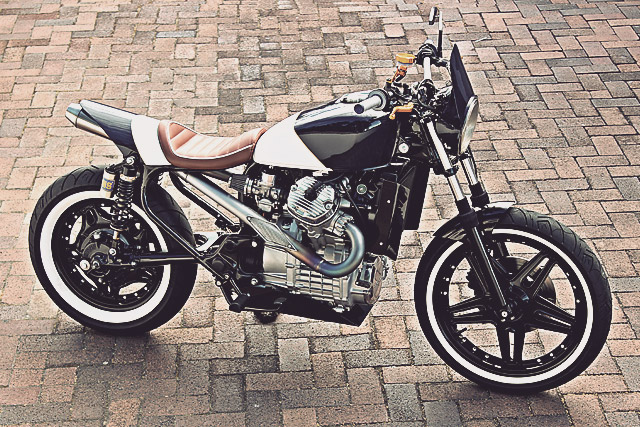 ‘Plastic Maggots’ they called them. And all for an unassuming little fairing that some ‘genius’ decided didn’t suit their tastes. Talk about throwing the baby out with the bath water. Thirty five years later and the Honda CX series’ full potential is only just being realised. With a bullet-proof v-twin, shaft drive, liquid cooling and failsafe electrical system, this is a bike that oozes potential. Just ask the boys who used the bike to take the 500cc pushrod record at Bonneville. Them, and the very talented Josh Mott of JMR Customs. “This is my latest creation, a 1979 Honda CX 500 custom,” says Josh. “I’ve always wanted the chance to put my own twist on a CX, so I put the word out around the Boise area and a couple of months later Boise Vintage Cycle unearthed one that they kindly donated to us. The bike was in very rough condition, but like always I do my normal checks. If it has spark and compression then nine times out of ten I can clean the carbs up and get it running. The bike had both and it fired right up.” As soon as Josh knew he had something to work with, he began coming up with ideas. But not before stripping everything off the bike that he wouldn’t be using. Then he and his dad started brainstorming. “I had been noticing that most everyone building up the CX model had done a low-mount exhaust. The idea was to do 2-into-1 pipes and have it exit out the center of the rear fender right above the wheel. I was able to have them come straight back and connect right in the center of the rear wheel. The rear fender I made around the exhaust in 3 sections of 16 gauge steel.” He also made the seat out of fibreglass – remarkably, it was his first time working with the material and he managed to impress himself with the end product. By building the exhaust up through the centre of the bike, Josh had the added task of relocating the wiring, battery, CDI, and the regulator/rectifier. Unsurprisingly, the only place he had room to place them was underneath the motor. Accordingly, he built a battery box that he could mount all of it components inside cleanly; the wiring now runs down the frame in between the carbs and neatly into the battery box. The headlight assembly was all hand-made with the headlight itself coming off of a XS650 Yamaha. Josh wanted to make a cool-looking dash and headlight bucket all in one piece, so the speedo, tacho, temperature gauge, choke, and ignition switch are all mounted onto the dash itself. And the hat tip to the original ‘plastic maggot’ fairing has not gone un-noticed… at least here in the Pipeburn offices. “After most of the chassis was mocked up, I noticed the stock suspension and triple clamps made the bike look slightly like a chopper with its uphill stance. The stock triple clamps raised the stance 1 inch. So I found a set of CL360 clamps that (surprisingly) fit the frame with no modifications and it dropped the bike by 1 inch. It helped, but it still was not where I wanted it. I then shortened the forks 1 inch from the inside and installed 1 inch longer eye to eye shocks on the rear. By doing this, it gave the bike a great ‘bulldog’ look and made it look nice and level.” The wheels were something that Josh took a chance on. He pre-drill holes 2 inches apart all the way around the wheel, powder coated them black, and then drilled them again for a highlighted look. With the white wall Shinko 777s, we think they came out pretty damn nice. “Everything on the bike was done in-house, except the powder coat and upholstery. The paint credit goes to my dad, Randy Mott, and the photo credit goes to my girlfriend, Kate Robbins. If you have any questions, feel free to get in touch.”