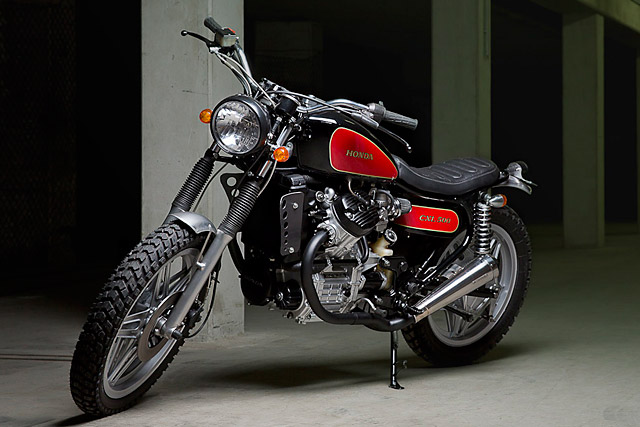 Another month and another killer creation from Gelsenkirchen’s Dirk OehlerKing and his merry band of men at Kingston Customs. As before, they’ve turned their nimble fingers to a Honda CX500 but this time they’ve taken it in a decidedly different direction. And that direction is mostly a hard left off the bitumen, onto the soft grass and up the nearest embankment. Introducing Kingston’s latest build – an amazing hybrid motorcycle they are calling the CXL500. Dirk filled us in thusly. “One day a friend came to the garage and brought a ’79 Honda CX500 with him. He asked me to see what I’d do with it. He didn’t want a Café Racer; he wanted a bike suitable for everyday life that he could also ride off-road. He wanted, he said, to ride it to the horse stable every day. Which gave me an idea…” “So I had the idea to build a mix between a street and an off-road bike. As Honda had built a CX500 and an XL500, it was obvious to us to build a Kingston Honda CXL500 Scrambler.” “The bike was stripped completely, the frame was glass bead blasted and modified, then painted. The engine was treated with a thermo-sensitive coating. It has an output of around 50 hp.” “We’re responsible for the bench seat, the battery box, the Aluminium fenders, the 2-into-1 exhaust manifold and the radiator grille & spoiler.” “We also added an exhaust pipe from Speed Products, footrests from a Yamaha XT600, a mini Cat’s Eye tail light, a K&N air filter, Lucas Stahlflex brake lines, a Shinyo front light and Heidenau K60 rubber (100/90-19 and 120/90-18). The ‘bars and the tank are standard pieces.

Overall, the style and paintwork was intended to remind you of the old Honda Enduros from the seventies.”