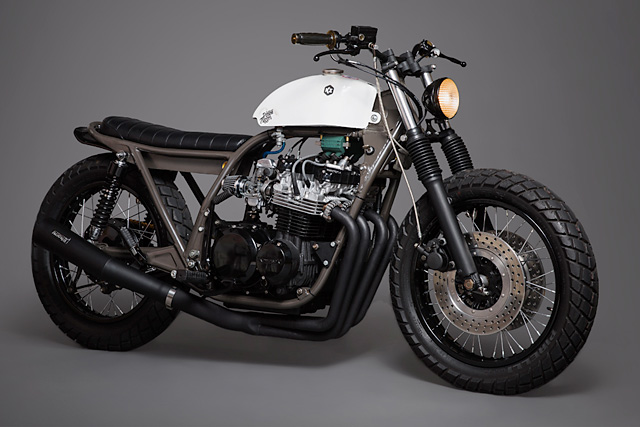 Estonia. No, we didn’t know where it was either. As luck has it, the country is essentially Finland’s southern cousin which should help you figure out how the hell you’d ride there if the mood ever took you. And if, once you arrived, you were looking for one of Estonia’s coolest builders to hang out with, best grab a ticket and fly straight back to the good ol’ US of A, because we’re here to tell you that Estonia’s finest is coming at you straight out of downtown Philly, Pennsylvania, and his name is Alex Veaone. “I am originally from Tallinn, Estonia,” says Alex. “It’s a tiny pixel on the map located in the Baltic region of Northern Europe. Now I reside in Philadelphia and work as a graphic designer; I love to work on and ride motorcycles in my spare time. This is my second project that I recently completed.” “The bike is a 1979 KZ650 that I found on Craigslist in a very rough form. It had a title, the engine turned over, the price was right and I was itching for a new project. It took a little over a year to complete. I have to say that this project didn’t come easy. It seems like I have spent the majority of time fixing my own damn mistakes. It took me so many tries just to get the smallest thing accomplished. However, the feeling of completing this project was amazing and all the headache was worth it.” “I’ve always been a fan of 70’s-era Japanese bikes and this is my second project. The first one was a blue KZ400. Unfortunately, I crashed that bike into a van last month and I am pretty sure it’s totalled. However, I feel pretty lucky to escape (almost) unharmed.” “I got that bike because I liked the way it looked. It had very nice lines, the tank was beautiful and it was easy to work on. Also, I think the simple tubular frame and proportions of the bike made for a good build platform. The second KZ was an impulse buy. It was cheap and had similar lines, but it was in a lot worse shape. Since I knew a little bit about the 2 cylinder, I thought I would learn about the 4 cylinder and keep the trend going.” “A few of the mods include a welded a shorter rear frame loop, an 18″ front wheel conversion, all new bearings, a dual front disk conversion, a lowered front end and shorter rears, a bespoke small battery box to fit under the seat, vintage tractor spotlight for a headlight and a rear tail light that has been swapped for a small LED unit under the fender” “I also fitted a gas tank from an old Kawasaki Enduro and did a custom paint job on it, I fabricated a new seat pan and seat, rebuilt the engine and carbs, added new electronic ignition and coils, simplified all the wiring and relocated all the switches into the battery box. I also added a Kerker 4-1 exhaust and a manual cam chain adjuster, which I highly recommend.”