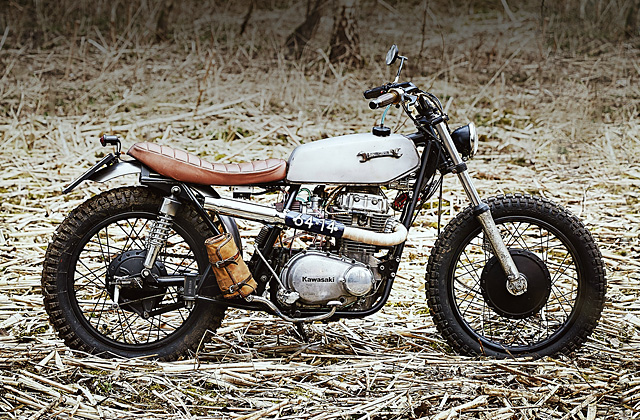 Klassik Kustoms is a small workshop run out of a barn in Hagen, Germany. Specializing in Yamahas and Hondas under 750cc the owner, Jan, aims to make affordable, cool specials that are fun to ride and affordable to own. Since 2010 he’s put together several tidy café racers based on old air-cooled bikes but this time around Jan has taken a tilt at something a little more upright with this 1979 Kawasaki Z400* tracker. The Z400 remains one of the few affordable starting points for a bike build, with the honest little Kawasaki having only a small following, with few really drawn to the economical little commuter. Despite early problems – mostly with the engine attempting to lubricate itself externally – the Z400 evolved into a reliable, thrifty bike that remained in production for over 10 years, only really changing once with the addition of a six speed close ratio gearbox. It was easy to ride, easy to service and ultimately, easy to part ways with. As such the bike doesn’t have the Heaven’s Gate style following that stalwarts of the scene like the XS and SR have. There’s not too much about this bike that’s stock – Jan claims that the only part of the bike that is standard is the triple trees and the frame. The bike has a Yamaha DT175 two-banger fuel tank, stripped bare and with an external fuel level indicator welded on. On the other side is one of the neater things I’ve seen recently on a custom bike – a spanner is fitted to two threaded rods welded onto the tank. With a flick of the retaining wingnuts, it can be removed and used to work on the bike or throw at passing vehicles. This particular Z400 engine proved to be a bit of a drama, with Jan having trouble sourcing parts for an overhaul. After some searching he decided to fit the powerplant from a Kawasaki Z440 – a bike I know little about except that it was about as popular as perms, levi’s and simmering ethnic tensions in Bosnia Herzegovina in the late 80’s. Jan states that with the new VM30 Mikuni carburettors and engine the Z runs strongly – putting out a claimed 40 horse power. Klassik Kustom also bent up and fitted the exhaust in-house and removed the electric start from the new engine and fitted a kicker as according to Jan ‘… real bikes need to be kicked!’ The front end is more Honda than Kawasaki, with a drum taken from an early Honda CB450k and fitted to CB360G front forks, which were lowered by 4 centimetres, along with the shocks at the rear. The seat is originally for a Yamaha SR500 which Klassik Kustom recovered in leather and worked to fit, and I think it looks great – I’m a sucker for the combination of brown leather and raw metal. Of all the bikes that we feature on Pipeburn this Z400 is probably one of the rougher ones – with an exposed cut down rear frame, raw finish and a mish-mash of parts, but altogether I love the look of it. It’d be light and fun to ride, reliable and has a few clever additions that may well make it onto the next bike that I start to put together. I might even keep an eye out for a Z400.