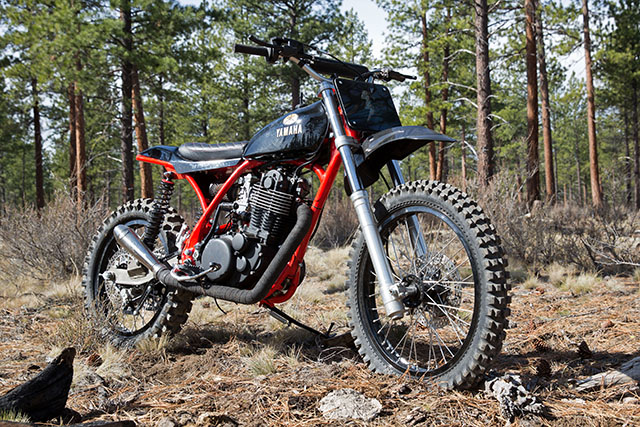 The Yamaha SR is a staple in the diet of the custom bike world. Easy to work with, reliable and carrying that thumper note, they have made many a solid platform for a custom ride. These days, most seem to end up as café racers or brat styled trackers. Not this one. This SR500 was built with something different in mind – a vintage looking dirt bike with upgraded components. Built as a collaboration between See See motorcycles and Motofactory PDX, this 1979 SR500 has been built for kicking up dust and picking up the odd trophy. This build actually came into existence because Thor from See See got talking with Sean from Motofactory and let slip that there were a few SR500’s gathering dust in the See See basement. As Thor was under the pump on another build, Sean decided to take the lead on this project. “I think excitement got the better part of him” says Thor. “Because this was less than 1 month before The One Motorcycle Show and the date we would debut the bike to the motorcycle world.” Sean got to work taking the bike back to bare bones, the SR was stripped of its rear suspension. A new handbuilt swingarm and chain tensioner was mounted, allowing for extra travel for the 14″ Progressive Suspension shocks. To keep with that dirt bike stance, the front end now sports an XR400 front suspension mounted using custom triple trees, fitted with universal supermoto guard. Brakes both front and rear come courtesy of a YZF450, with the shouldered rims coming in at 21″ at the front and 18″ at the rear. The thumper powerplant has been given simple yet effective upgrades, the fuel system is now a Mikuni 36mm ‘Pumper’ carb, while the exhaust is the product of a Cone Engineering builder kit. The CDI was one of the benefits of using an SR for the build, while the bigger inlet and cooling fins on the SR gives it a slight advantage over it’s XT/TT stablemates, ‘allowing it to soak up more gas and cool down quicker’. Power is put to the ground by a 50 tooth sprocket, allowing ‘enough torque to pull a wheelie after every stop’. To give the bike a more sporting and lightweight look, the aesthetique of the bike has been worked over. An MX80 fuel tank has replaced the factory unit, the seat is a Gopher Glass unit that has been retrimmed by Northwest Auto Interiors. To help clean up the electrics, the original harness has been updated, and mounted up with a Digital Directiv battery eliminator. See that front number disc sitting in front of the Renthal bars? Hidden behind that is the LED lightbar that is used as the headlight, another simple yet effective mod to the thumper bike.

All this work paid off, with the bike finished in time for the The One Motorcycle Show. Taking out the ‘Single and loving it’ award – an award given away to a single cylinder bike chosen by the Ornamental Conifer. When Sean got up on stage he had been celebrating the completion of the build and his words were drunkenly delivered something to the extent of: “This award was appropriately given seeing as how I may be single now I have spent the last three weeks ignoring my wife.” So worth it.