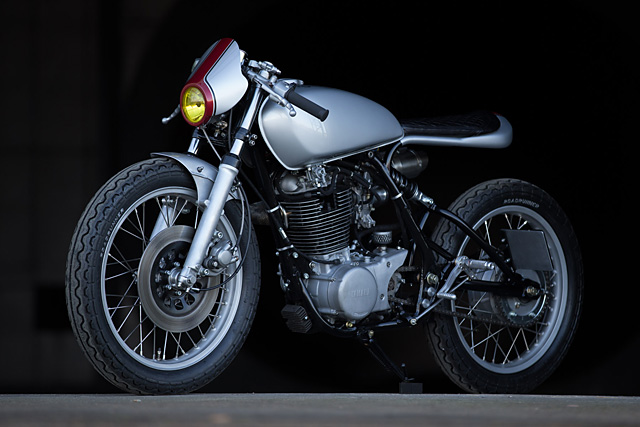 Hurricanes. Typhoons. Comets. Tempests. If you need any more evidence that the world’s weather is going to hell in a carbon-based handbasket, look no further than poor old Blighty and her Old Empire Motorcycles. The Pipeburn Bike of the Year runners-up in 2014, they’ve been suffering the worst luck weather-wise since their inception. And to make matters worse the catastrophes look set tho continue with this, their Yamaha SR-based ‘Lightning Mk. I’. Hang tight, boys. Hang tight and ride like the wind. This bike mark’s OEM’s first attempt at a build this world-renowned thumper as the basis for a design that clearly intends to distinguish itself from the masses. Taking cues from its namesake, the English Electric Lightning, this cold war-inspired custom features a bespoke monoshock swingarm, a shortened front and a handmade tail unit that comes together quite well, yes? “Built around a 1979 Yamaha SR500, our first thought was how to create something different, yet not too radical as budget was limited” says Rafe, OEM’s chief pilot. “After looking at the framework underneath, we figured a monoshock would fit perfectly in the end of the top tube (a.k.a. ‘the oil tank’) so we went about building a subframe onto the original swing arm that’d be suitable to mount a custom Hagon monoshock based on a Kawasaki zxr400’s rear.” The boys decided to drop the sharp end right down, machining the tube by inches and adding some new, stiffer springs with heavy oil. Then the yokes were machined down to mount the warning lights an the twin 48mm gauges were tucked neatly down in the handmade shroud above the headlight. “Although the tank looks like it wasn’t touched, it has been retunneled and moved to sit lower and further forward to keep the lines of the bike true. The original rear section was promptly cut off and replaced with a far nicer, flowing unit suitably braced with a second top tube that the rear of the tank now sits on. Custom LED rear lights housed in the tail section complete the look.” The running gear stayed stock, apart from the rear wheel being relaced by the boys to a 19’’ rim and shod in Avon Roadrunner rubber. Ditto for the rubber up front. Mechanically the engine was judged to be fairly sound, but as a matter of course the 6 volt system was upgraded to a very modern 12 volts. Further visual refinement was added by way of blasting the engine, painting and blasting the casings, and vapour blasting the carb. [superquote]“We outsourced the paint to a local gun; they completed the simple but effective paint job beautifully. We think it’d just enough to get your attention without being too in your face” says Rafe.[/superquote] Other details include the custom, big-bore exhaust and end can, a modified intake manifold, a Recon charging and ignition system, Barleycorn Engineering clip-ons and rear-sets, and a handmade leather seat.

“All in all we are really pleased with the outcome and we cannot wait to tackle the Mk. 2 so we can push the design even further. The Mk. I is also up for sale, please contact us for more information.”