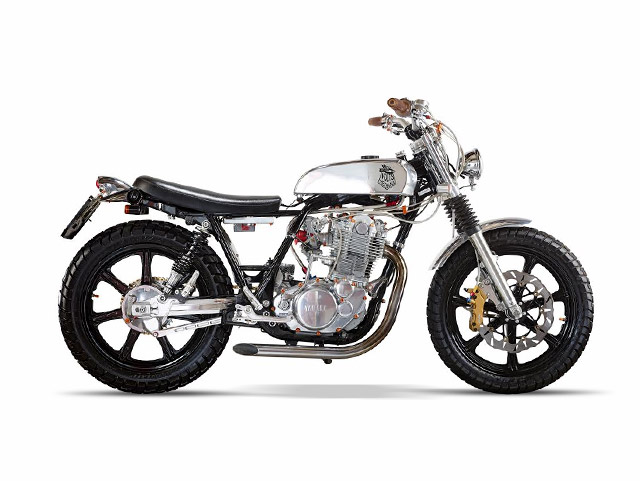 Most bike builders who are lucky enough to have more than a few projects under their belt will likely tell you the same thing; they’d love to have their own shop. Be it ever so humble, there’s no place like not your home. So you’d think that once you have a shop on the go, you’d be a happy camper. But not for Tony and Clive from the UK’s Volts Mechanix. See, they currently have two shops. Yes, two. One for summer and one for winter. We’ve heard of the English landed gentry, but this is ridiculous. Here’s Clive, or Sir Reeve as we like to call him. “Tony and I have been collaborating on projects, both large and small since the nineties. Our initial foray was custom longboard skateboards, both of us lived and worked in Zürich for extended periods and developed a unique cross-culture view on life. We had arrived at the same point in time through a love of music, bikes and general chaos.” “A couple of years back we decided to join forces on a bike build. Initially it was foreseen as a step into road racing, Tony being the idiot to take the seat. However we came across a 1979 SR500 and decided to rebuild it to our own specifications. The main goal was to make a bike that would be fun to ride in town and out on the open roads. Low seat height to make it comfortable to cruise, modern brakes and ignition to help stopping and starting the beast. We stripped off anything that wasn’t needed and polished up the rest.” “We both had the misfortune to buy modern bikes quite recently and found that apart from pumping up the tyres there was little ‘do it yerself’ work to be had on them. We had enjoyed the old carb-based bikes that you could tune and mess around with. Once the SR was underway we received lots of admiring glances and a couple of commissions. So we thought ‘why not’ and Volts Mechanix came into existence.” “Since then we have worked out of two workshops, one in East Grinstead the other in Uckfield” And no, he didn’t make that name up. “The Uckfield one is bigger and better, but the damned roof leaks so we only use it in the spring and summer. It’s a shame as it’s on a farm and we can mess ‘round on trial bikes during lunch. We aim always to use local firms when we need to outsource (powder coating, MOT’s etc) so have built a little community around us.” “We make all our own seats and leather work, so saddlery seemed like a natural addition to our mechanical endeavours. We have an XL600 on the bench at the moment which we will make into ‘FrankenTrail’ a.k.a. the worlds most terrifying custom built trail bike; we want it to look good both muddy and shiny in the high street. There’s a couple of tiny two strokes that are going to get the full early ’80’s treatment too. One muddy, the other just fast and loud!”