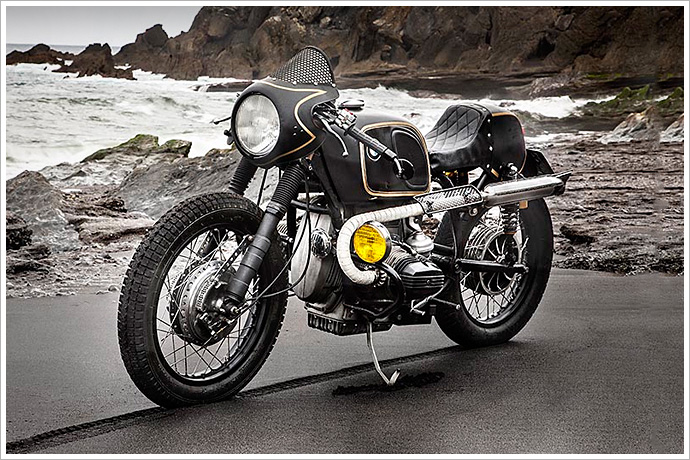 After just arriving back from today’s Deus Bike Build-off and chatting with Darren, the overall winner, it’s more than a little ironic that our latest bike is in many ways a European equivalent to the builds we drunk beer between today. She too is a creation that is more concerned with the raw spirit of custom bikes than the superficial glitz and glamour that some parts of the scene seem to dwell on. She was built on a tight budget and without any professional help. And lastly, but most importantly, she took out the first prize at the 2013 Wheels and Waves show in Biarritz this year. Meet Russell Mechanica’s down and dirty ‘La Pantera’. “My name is Eduardo Iglesias. I am a 38 year old fireman located in Asturias in the north of Spain where there are some pretty awesome roads to ride. I have a six year old son and another that is coming in January. I’ve been tuning up bikes since I was very small. Some were to restore, but others to make them look different and better. Most of the bikes were small capacity and were made for me and my friends. As you can probably tell, bikes are important to me. I love all the good things they stand for… the freedoms, friendships, trips and family.” “I’ve been seriously customising bikes for about 6 years now, but it was just this year when I decided to take it on as a second job. We named the shop ‘Russell Mecanica’ after my dog, ‘Paco’. He’s a Jack Russell, and he’s always with me. Sometimes, he even gives me some inspiration.” “I traveled a lot to France and the UK a few years ago, and it was all the bikes I saw there, mixed with me working on the old Spanish ones locally that gave me my ideas. This is why there is always something about me in every bike I do. I also try to avoid falling into the trap of searching for the really old bikes that are expensive and not so good to ride. Like most places, in Spain we have a lot of 80s and 90s bikes that are powerful, fun to ride and cheap.” “The bike is a 1980 BMW R100RT. I bought it with the idea of turning it into something unique. It was running but it was in pretty bad shape. I decided not to do a full restoration; instead I wanted to keep all her ‘war’ marks. I knew the last owner and it was well maintained, but overall it wasn’t how I really imagined. I tore down the engine and made it run perfectly with some aluminum competition pistons and whatever other new parts it needed. I wanted it to be fast, but more importantly strong. These BMWs are amazing. The engines are very simple and strong, with heavy parts that make you feel as you work on them that they can last forever.” “I made the bike all by myself and for myself. It took about 8 months. I really wanted a comfortable bike that I could ride frequently. I also painted it. My inspiration was to do something different using my creativity and parts form other donor bikes. The front brake is from a Suzuki GT 750 and the forks are from a Sanglas 500 cc. The seat is from an old racing OSSA and there are also some new parts, including the handmade back frame, exhausts, tank, light and tachometer.” “Roland Sands said,
‘Now this is a real badass bike.’” Ed takes the Panther for a walk

“We took a little road trip and entered it at the Wheels and Waves 2013 show in Biarritz. We were luck enough to take home first prize. I was speechless. Roland Sands said, “Now this is a real badass bike.” I will remember that for the rest of my life.” That’s the bedtime stories to the grandkids sorted, then. Nice work, Ed. Nice work.