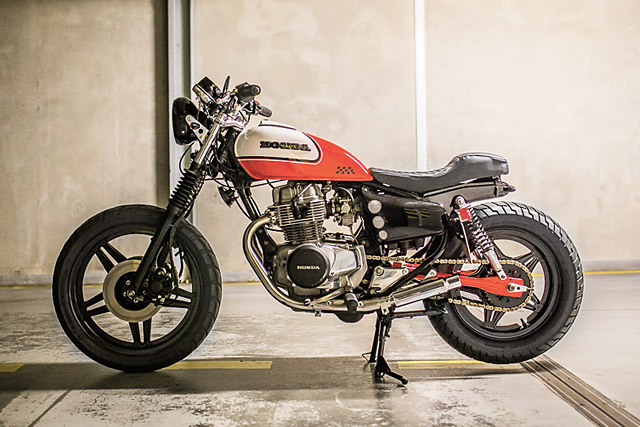 Seems like everywhere you look lately, there’s death and destruction all over the news. This country hates that country or some such ‘us and them’ type disaster. Makes you wonder what we could all achieve if we just got along. What if we worried less about our differences and instead we looked for more ways we could work together? Take, for instance, the Jasinski brothers from Poland. They’ve found their good Slavic selves becoming obsessed with Japanese customs done in a British café racer style with a little good ol’ American flat track thrown in for good measure. How’s that for loving thy neighbour? “Hello again, Pipeburn. We are two brothers from Poland who really love vintage Japanese bikes. We are called T.JASIN Motorcycles. You might remember our Honda CB 400 done up in Gulf colours that was on the site a while back. As you might have guessed, we prefer this model because they are pretty easy to get over here and their prices are still quite reasonable. Though that may not last much longer. This one is a 1980 model that we decided to make into our version of a café racer. We’re proud to say that it’s destined to take up residence in our own garage, too.” While the boys are more than a little open to improving international relations, that’s not to say that they aren’t ready to give a little leg-up to Mother Polska where appropriate. Hence their choice to paint their latest creation in Poland’s national colours, red and white. And a whole heap of black, too. Let’s face it – it’s a hard combo to beat. Just ask the Red Baron. Or Santa. “As always, we redid or repainted every part of the bike, including a new seat finished with some good quality black leather in a diamond stitch. It’s mainly inspired by café racers, but you’ll probably notice the tracker influence – especially with the ‘bars and the seat. There’s also the flat-track inspired tank decals.” The boys handmade the gloss black air box boards and painted the rear arm to match the tank. On this they put some fairly hefty rubber boots to give the build that solid, meaty look. While they were down there they also added a custom exhaust to add a bit of go and to lovely up its sound. They also ditched the fenders in a well-proven ‘less is less’ parts selection process. “The Honda rides so great that we can’t believe it has more than 30 years on the clocks. The engine has lots of power. We were so impressed, in fact, that we decided to leave original filter box in place; this way we guaranteed that the bike would have a little more power in the lower rpm range; just what we wanted for around town.” “The original CB400 isn’t that much of a looker. So every time we start a build with this model, we want to make something new and something refreshed. But mostly we want to make a bike that looks great. If you ride it and it isn’t grabbing everyone’s attention, we think that we probably haven’t succeeded.” “That probably explains why it has so much tracker in it; a lot of people think that a café racer should be only black or better still, matt black. But we want to make a our bikes more living and vibrant. We like it, and we hope you do too.”