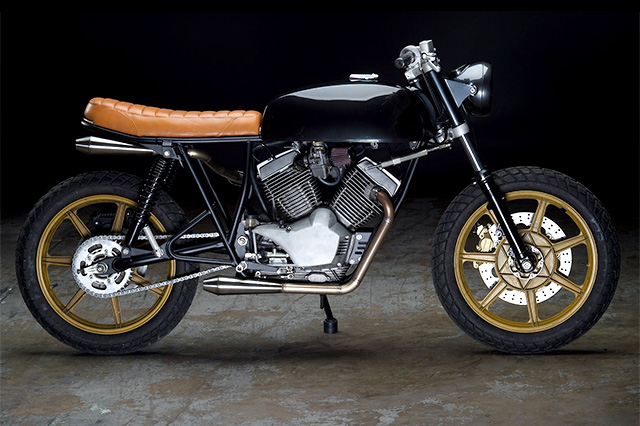 Let’s face it; the whole car-to-bike custom crossover thing isn’t exactly hot news. We’ve all seen the evidence. The Gulf Oil paint jobs. The Ayrton Senna tribute builds. The hotrod-inspired Harleys. But for the more inquisitive builders out there, there’s still many untapped sources of four-wheel inspiration left if you look hard enough. And for Alan Stulberg from the renown Revival Cycles in Texas, the style for his latest build was obvious. “Sure, it’s not a 80’s Ferrari and Moto Morini never built a GTS model, but it’s what we wanted; a bike with a little 80’s Ferrari passion.” Here’s the bike Magnum P.I. would have ridden if he had better taste – Revival’s Moto Morini “GTS”. Alan started by telling us that the client who brought in the donor bike said he was inspired by 80’s Italian sports cars. As far as design briefs go, we can think of a lot worse. “He wanted us to take that thought and build him a cool, stripped down custom that displayed some of that same Ferrari charm. No it’s not a Ferrari, but we’d like to think one could see the direction we took made sense.”

The Austin team took this build on simply because Revival’s favourite type of build is one that is different from the crowd and, let’s face it, Morinis definitely set you apart from the masses. “Perhaps we’re a little different from other shops, but we specialize in not specializing. It keeps things more interesting to have the chance to master more than one particular model.” Having the time to get well acquainted with the Italian hardware at hand, Alan sang the praises of the Moto Morini engine design team. “Long before the new, flathead-inspired Indian Twin, Moto Morini tried and succeeded in making an overhead valve engine look like something much simpler and with a more vintage appeal. I think the Italian manufacturers almost always did this better than the rest, but in my opinion there are few engines that post date this one that still focused on engine’s appearance so tightly.” The owner’s request for a budget-conscious build mean that the decision to keep the original tank was an easy one. But that doesn’t mean it wasn’t modified. “We tweaked the factory tank to allow space for the new Anti-Gravity Lithium Ion battery, new wiring and a new ignition system. As per our previous builds, the brains of the machine is a Motogadget M-unit electronic control unit and ignition system. The switches and speedo are also Motogadget units and they really help clean up the cockpit. They are so good, we’ve been installing them on all our builds. They seem to be up to it  – we’ve seen few returns and many happy customers.” [superquote]“We cut the side cover over the dry clutch. It gives that visceral feel to the bike when it’s running.”[/superquote]

One of the weak points on the Morini twins was their electric starters, so Revival chose to remove it altogether and rely solely on the bike’s kick starter. This also allowed for some stylistic modifications to the side cover once it was removed. “We also cut and modified the other side cover over the dry clutch. With it now exposed, it improves the visuals of the engine and gives that visceral feel to the bike when it’s running.”

“From there we modified a metal headlight bucket we carry and installed the Speedo in the new housing. We also installed a headlight that incorporates LED turn signals into the periphery of the lens. Out back, the lighting is rounded off with a simple LED tail light/turn signal combination.” The entire setup has been integrated into the Revival custom seat, which was then professionally upholstered by Ginger at New Church Moto in a rich tan leather that is (you guessed it) inspired by Ferrari interiors from the 80s. That, or the over-baked skin of a rich, 80s Italian housewife holidaying on the Amalfi coast. Then came the custom rearset footpegs and controls which were then hooked up to a relocated rear master cylinder. And although they were able to utilise the factory’s rear brake caliper and rotor, they chose to go a different route on the front. Alan got machining and in no time a custom rotor carrier and bracket were nabbed up and married to a modern Brembo rotor and dual-piston caliper assembly. “Coupled with a modern Brembo front master cylinder and new micro stainless brake lines front to back, it all came together to make a real difference to the bike’s stopping power. This little guy stops on a dime and the brakes are very responsive.”

There was also time set aside to rebuild and upgrade the front fork internals and to add a simple set of progressive shocks in the rear. We’d think that this would be one of the better handling Morinis out there. “We then designed and built a very simple, matched set of stainless header exhaust pipes with integrated mufflers by Cone Exhaust. And to round out the entire build, we chose a Ferrari metallic grey paint for the bodywork and decided that the factory gold finish of the 7-spoke mag wheels perfectly complimented the Ferrari-inspired look we were going for.” At the end of the day it’s not too big a stretch of the imagination to see that the theme of a 1980’s Ferrari was implemented with much aplomb and this little Morini seems to carry it pretty well. So well, in fact, that we can almost feel the Italian summer breeze blowing through our chest hairs. Tom Selleck would be proud; and were pretty sure the boys from Revival Cycles are, too.“We believe it stands up well stylistically to many of our more complex builds,” says Alan. “Also, did I mention this Italian twin has an awesome exhaust note?” We hope it’s new owner enjoys hearing it as much as we enjoyed looking at it.