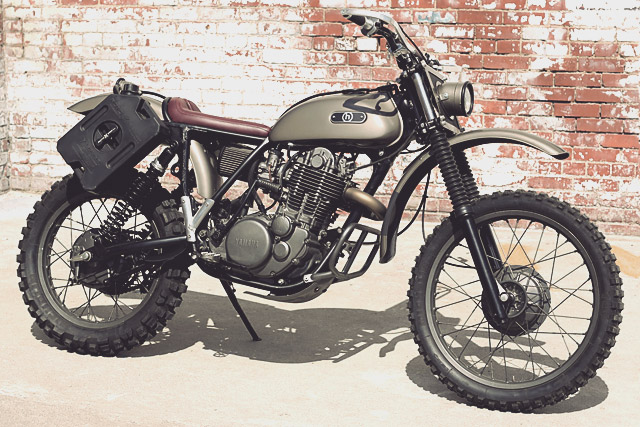 You’d think that throwing in your job would be the pinnacle of fear for anyone making the leap and starting up their own shop. But when you think about it, that’s the easy part. It’s the bit where you have to put your spanners where your mouth is and actually make your first bike that will do your head in. So imagine the surprise and delight of a newly minted shop owner who not only manages to make a bike like this on his first attempt, but who then goes on to take Best in Show at the bike’s maiden outing. That owner is the very surprised and delighted Scott Halbleib – Pipeburn regular and creator of this killer XT500. What makes Scott’s story all the more amazing is that with a virgin shop on his hands, he then threw himself headfirst into organising the Kentucky Kick Down, a regional and much praised bike show in his home town of Louisville. He readily admits that he bit off way more than he could chew, which probably accounts for fact that he’s been off the grid for the past two years. But it hardly seems to matters when you appear out of the darkness with something like this to show for it. “When building, I focus on two primary goals,’ says Scott. “I always try to start with something different and I try and do something that I have not seen before, which is getting much more difficult. My last builds included the big Brick, the CB450 which was a little underwhelming on power and the XS that seemed unnecessarily heavy. So I wanted to create something very different. Modern Metals let me ride the Yamaha XT500 he had just finished which really set my course… a thumper was definitely the way to go.” Scott found this bike on the Internet and decided to take a road trip. The previous owner had turned it into a dirt tracker and other than some questionable paint work and stick-on pinstriping, it was a pretty nice. Then like clockwork, some of the Louisville Vintage Motorworks fellas started giving Scott grief about tearing apart another sweet bike… but after a couple of rides to the local bike night, it was placed on the lift and the tear-down began. “I was not exactly sure what to do with the bike but I knew I wanted to make it look older, taking some cues from Honda Elsinores, vintage Huskys and Greeves bikes, which I dig. Immediately, the plastic got tossed along with the tank. I also switched the 18/19 dirt track set-up back to 18/21. Then I started sketching, carving foam, bending cardboard and mocking up ideas. The first concept had been a stylized version of an old dirt bike, but it just would not work the way I envisioned. I just wasn’t prepared to sacrifice that much height and suspension travel for the design.” After a couple of months of late nights staring at the bike, sketching ideas, and weighing up his options, Scott finally decided on a Yamaha CT175 gas tank. Over this, a 3/8” rod, or  ‘backbone,’ runs from the front to the back of the bike. The tank had to be cut out to fit the frame correctly and also notched to wrap around the oil filler cap. After deciding to do a double hoop on the frame to create the backend rise of the seat and to hold the rear ring for the tail light, Scott’s friend and local blacksmith Lewis Meyer at Falls City Ironworks helped him get the hoops shaped. Then he trimmed, sleeved and welded them into place. Next came the rear fender which was mocked up from an old fender laying around the shop. Jeff Gill of Airkooled Inc fabricated the final piece that incorporated a battery box and a recessed tail light, along with some other really nice details. “The seat needed to have the backbone run through it, which meant it needed to be tall enough to keep the rider from having a steel rod up their ass but not too tall aesthetically. Using high density race foam for its rigidity and untold hours on sorting out all the seat unique trimming requirements, the construction was sent out for upholstery. I decided to use the Super Trapp exhaust and then fabbed up new header pipes. I also wanted to create a universal mounting system; the bike has a 38mm Mikuni and I thought a little extra juice would come in handy, so I mounted a one gallon Rotopax tank which I had seen on one of the Icon bike builds. I also made a second mount, which carries a waterproof Kriega pack bag. I had already installed a bash guard but felt like it needed a little more armor to really get the look I was going after. I had and ATV crash bar but I needed to reduce the width so I cut and welded it, then built a mount to weld to the frame.” The paint was decided early on; graphite would cover the wheels and the motor, while a semi-gloss black frame, dark silver tins and black seat would finish things off. The exhaust wrap came and it had a bronze tint to it, which Scott liked enough to start him rethinking his color options, eventually settling on the one you see here. The last touches included having emblems and vinyl templates cut and the whole thing painted. He also added hand guards, some larger and more aggressive pegs, longer progressive rear shocks, lengthened kickstand, shaved steering lock for proper headlight depth, tapered bearings and all finally all the original bolts were replaced with their stainless steel allen bolt equivalent. “It’s been a while since I had something to send out, but I wanted to make sure I was content with the end result, and I am. I’m never a 100% satisfied, but I’m close. Thanks to Modern Metals, I was able to finish it in time to make it to the Rockerbox Motofest in Wisconsin where it won Best in Show. It’s not necessary to win an award, but it sure is nice to know that what you are doing is also striking a chord with others. I will keep doing it as long as I can fund it. There are plenty of bad days, but a few good days can make it all worth it.”