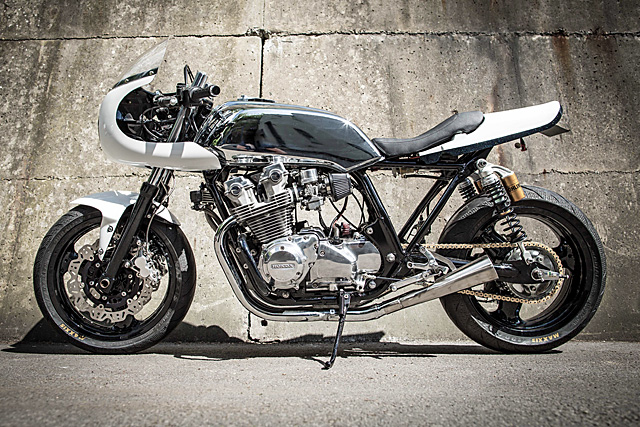 2 Wheels Miklos is a workshop based in Surrey, England who restore, sell and customize everything from leaky old Nortons to leaky new Harley Davidsons. And while some of their work is fairly traditional, with nut-and-bolt stock Japanese super sports and ailing British twins routinely bought back to life, this time around Miklos have wheeled out this curious 1981 CB900F Bol d’Or. Equal parts 80’s tailored cigarette sponsorship, 60’s roadside coffee and with just a hint of the Monster energy drink crowd thrown in, the old Honda has found a new lease on life as a bike designed to turn heads in the summer sun. Looks aside, the guys at Miklos wanted the bike to be low, tight and fast. And when hunting for horsepower out of an old bike, there’s far worse places to start than the Bol d’Or. While its predecessor, the CB750F, was an incredible performer for its time it was becoming outmatched in the late 70’s when paired against the blisteringly fast Kawasaki Z series. Honda sent their crack team of engineers back to the drawing board and they produced the CB900F. Featuring 90 brake horsepower of reliable, useable horsepower cradled in a frame that wouldn’t try and throw you down the road when you grabbed a fistful of brakes. In its day, the engine produced excellent mid-range performance paired with typical Japanese reliability so the modifications Miklos did were pretty straightforward. It was outfitted with a set of pod filters, the carburettors were jetted and Italian Marving 4-into-2 header pipes were fitted to mufflers fabricated in-house. But to get the bike low and tight, considerably more work was required. Öhlins piggyback suspension was fitted to the rear, while the front forks and both wheels were taken from a modern Triumph Trophy sport tourer. EBC contour wavy brakes were fitted with stainless steel lines that run up to a Brembo radial master cylinder – and if the braking setup is designed to haul the transcontinental Trophy to a stop, this Bol d’Or should be able to stand on its nose rather easily. The Harris clip-ons and a Norvil nose cone fitted by Miklos brings the rider closer to the café racer crouch than the original 900’s ‘sit up and beg’ riding position. At the rear the bike runs the distinctive Z1 ducktail seat finished in white, which when combined with the white fairing and guards gives the bike an air of cool 80’s track day special. However, the finish on the tank is much more ostentatious. Rather than doing some of the elaborate paint schemes seen on their other builds, the whole tank was stripped and chromed. That’s right – it’s not an aftermarket aluminium unit but the whole 20 litre fuel tank was given a mirror finish. And yes, they say it is as difficult to keep clean as you’d imagine. 2 Wheels Miklos pride themselves on bikes that are reliable, built well and turn heads. And when you look through their website and come across their brass-bell-toting 1200cc WL replica Harley and baby blue chequered BMW R80 scrambler, you can see they’re doing a pretty good job at it. They’re a workshop with a lot of ambition, a wide appreciation for every kind of bike you can imagine and judging by some of their other builds, no small amount of humour. Watch this space.