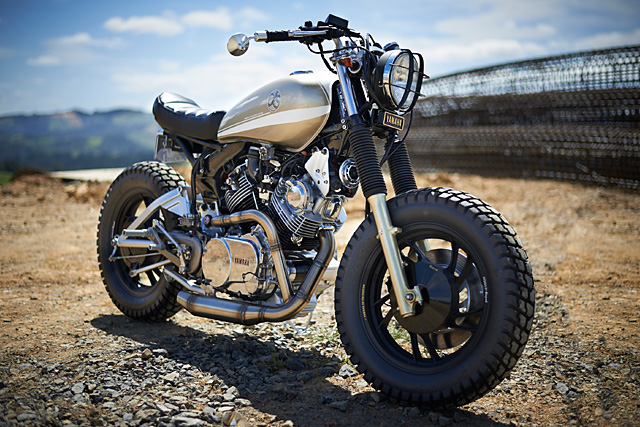 It’s difficult not to love Yamaha’s timeless XV750. It’s a bike that was intended as a cheeky Japanese tilt at America’s star-spangled Harley market, but now-a-days it can take on pretty much any custom role assigned to it with mucho aplomb. Café racer? Bobber? Tracker? The bike’s been there and done that. And add that to the fact that the bike used an engine-as-stressed-member design, a rear mono shock and adjustable pneumatic suspension and you have a bike that was light years ahead of its competition. Speaking of which, it’s time to meet the builder of this rather charming ride. Introducing New Zealand’s David Sinfield and his very clean DS Design ‘81 XV. “My background is not in the motor or mechanical world,” says Dave. “I am a graphic design from New Zealand who is totally inspired by the beautiful works of art that I have seen on sites such as Pipeburn. It all started with buying motorcycle fuel tanks and airbrushing them just as a hobby. In the commercial world of digital graphic design, we seem to be drawn back to the tactile way of making and producing things; it’s a kind of ying and yang from mind to hand. That has led to this, my first build – and most certainly not my last.” Dave found this mono-shocked ‘81 XV750 and thought it would make a good introduction to the world of customs as his very first build. “I wanted to keep this relatively simple and clean. It’s pretty much stock, with a few new twists such as the single seat, stainless steel exhaust and rear to front wheel conversion. This was a total strip down and rebuild with every nut, bolt and screw replaced as I wanted it to be like a new bike.” “I wanted to stay in control and to do all the work myself from welding, fabricating, electrics, painting the tank and upholstering the seat. It’s the Kiwi way. Everything you see on this bike has been designed and made by me, although the rear to front wheel conversion was bought online. In a commercial world I know this makes no sense, but for a project builder like me it challenges and pushes you to the limits, and at the end of the day you can look back and be proud of what you have produced.”