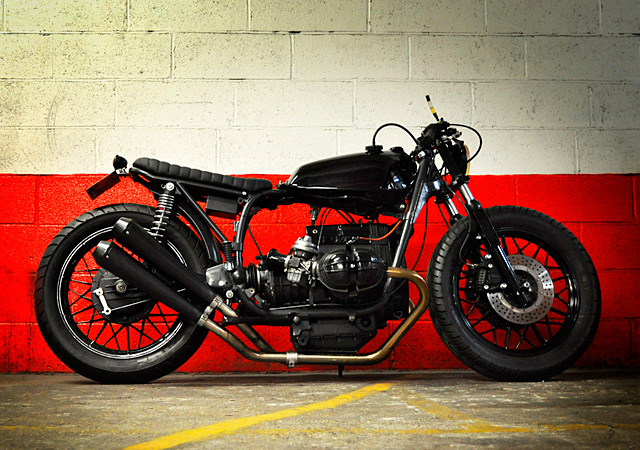 It sounds like an outtake from Zen and the Art of Motorcycle Maintenance, or an idea for a Karate Kid road movie. It goes like this – you muster everything you’ve learnt to build your dream bike and enter it in one of the world’s biggest custom bike shows. Then you crash and destroy it after two weeks. You are injured, but you pick yourself up and completely rebuild the bike just in time to enter it into the show, where’s it’s a great success. Along the way you learn about the futility of material possessions and the value of perseverance. Is it a script we’ve been working on around the office while drunk? Or maybe the fevered dream of a bike-obsessed lunatic? Nope. In fact, it’s all in a day’s work for Hugo and the boys from France’s Blitz Motorcycles. For those of you who might have been off-world for the last few years, Blitz is a custom bike shop based in Paris that was founded by two likely and very hairy French lads, Fred Jourden and Hugo Jézégabel. Known for their charismatic, mix-and-match stylings and a dangerous love of patina, the boys have been regulars on the House of Burnt Pipes for many a year. They also love them those nice BMW bikes. And how. The Bee-Em here, aptly named the ‘Black Pearl,’ was finished around 15 months ago. It was intended from the get-go to be Hugo’s personal ride. And as anyone creative will tell you, there’s nothing quite like having an open brief with only yourself to impress. As you’d expect, the bike turned out like a dream. The boys were sure it’d make a splash at Baritz’s 2014 Wheels & Waves show. But then… Fred takes up the story, “For two weeks, Hugo enjoyed his new love. Then, on the very same day we planned to leave Paris for Baritz to take part in the Wheels and Waves ‘pre-run’ meet, Hugo was hit by a car while riding. Actually, he was on his way to get the truck that was going to take all our gear. You can’t imagine the emotions and the disappointment.” Luckily, Hugo was only slightly injured – a bruised right arm and a dented ego. But the same couldn’t be said for the new BMW. “The bike we severely damaged. It was as bad as it could be without having to scrap it. We could have thrown in the towel and taken another bike, but we picked ourselves up and accepted the challenge.”

Four weeks. A total rebuild. Their best bike to date. No excuses. “We had to start from scratch just one month before showing it at Wheels & Waves. And it was representing us, so we wanted it to be perfect. In a way, we built it twice, and we wanted the second version to be better than the first.” As with most Blitz builds, the tank set the tone for the rest of the bike. In this instance, a Yamaha 500XT with a bespoke cup welded on the front to house the speedometer. The front fork was then lowered by 15cm to pump the stance, and an 18″ front wheel was added from an R65. Next up, tubing. A set of bespoke, stainless exhaust pipes were added (proudly Fabriqué en France, as the boys put it). Then bars from an R100RS were mounted and things got a little weldy with a new rear loop added to the frame. This was topped off with a brand new seat to match the exact swoosh of the supporting metal. “Last up was a brand new TCI/AC/CDI system and a matching (and much simplified) rewire,” says Fred. “We added the shiny black powder coating to the frame, fork legs and engine covers to tie things together. Then there was a quick re-jetting of the carbs to match with the custom alloy air filters. The cherry on the top was the vintage headlight from a 1970s rally car. We think the splash of yellow really makes it.” Inspirational stuff, huh? How’s that famous poem go? “To watch the things you gave your life to, broken, and stoop and build ’em up with worn-out tools. And lose, and start again at your beginnings, and never breathe a word about your loss.” But to put mere words to a feat of this magnitude would be damning it with faint praise. Nice work, boys.