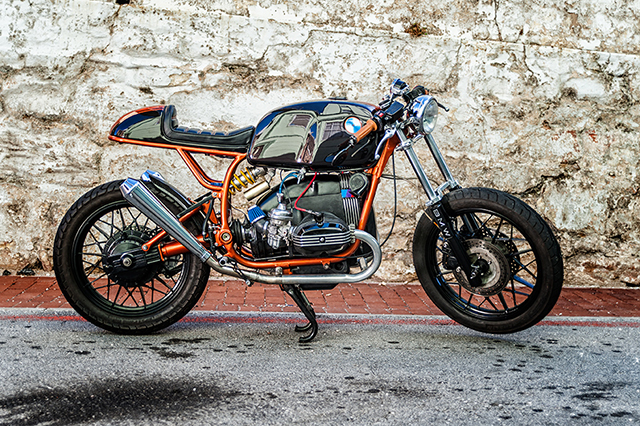 With the boom in popularity of the R series BMW’s of late the men who designed and worked on its many incarnations must be sitting back and scratching their heads, this they would say is not what they had in mind; BMW until recently had always been a very conservative manufacturer. That’s even more true of the R100rs that was built with the purpose of slapping on some panniers and cruising the highways of Europe, with the first review by Cycle Magazine describing it as a “Basic long-haul BMW”. But Craig and Thor of Route 62 Customs from Port Elizabeth in South Africa saw in this a 1982 BMW R100rs what so many others have seen, solid engineering, mechanical strength and a sense of unique style that would be perfect for their shops first custom. Craig is in IT and has a business selling bike parts and learnt his mechanical skills from his Dad, an auto electrician who built classic Ford’s. While Thor is a Toolmaker by trade and a wizard with a welder in hand, working a CNC machine or on the mill. But it wasn’t until Craig picked up a rough R100 with more than a few miles on the clock that they decided to pool their talents and create the business. Within minutes of Craig getting off the phone to Thor to inform him that the BMW was parked in the garage, Thor had arrived angle grinder in hand, looking for a place to start! At around 230kg from the factory the R100 has plenty of weight to shed and that’s exactly where the boys started, pulling the bike down to a bare frame and chopping off all the bits and pieces that weren’t going to be used. Looking at what lay before them they decided that the big change they wanted to make was to a full mono-shock design and let Thor’s fab skills do the talking. Once again the angle grinder was fired into action with the entire rear subframe given the chop and old shock mounting points removed. With the swingarm off the frame a new mono-shock style unit was fabricated utilising the stock BMW housing for the shaft drive. Back to the main frame and the boys fabricated a shock mounting point in the centre of the frame and then braced it and added reinforcement to counter the new load that would be distributed through the metal with the new setup. Fabricating a new rear end is one thing but getting it to work well is an entirely different kettle of fish and Route 62 was not going to cut any corners in getting it just right. Knowing they were going down the cafe racer path, the ugly BMW footpegs were cut off and new mounting points fabricated for a racier style riding position. With the frame work complete and the new swingarm unit working a treat the whole lot could be sandblasted to remove three decades of grime and grit before Craig laid down the orange paint. A traditional black or silver finish would have worked but the orange highlights the extensive fab work they’ve done and there isn’t a single bad weld that needed to be hidden. The fibreglass seat unit was built in house and ended up becoming both a blessing and a curse. It looks so good that during the build word got out and orders for fibreglass work started to come in that slowed the progress on the BMW build. But when time allowed Craig got back to laying the paint down on the new seat and the stock R100 tank and it’s a hell of a job. The black is embedded with a fine orange pearl that only reveals itself when the sun hits it from the right angle. The orange used in the pearl matches the solid orange that is responsible for the stripes and even the leather seat gets orange stitching for complete continuity. The 980cc Boxer engine might have been a high mile machine when Craig picked it up but it came with the advantage of just having had a full rebuild and these are some of the most reliable motorcycle engines ever made. But you can always add a few extra ponies and the headers have been ceramic coated – Craig has a pet hate for heat wrap. These are finished out with upswept pipes that finish just behind the new footpeg location and have a pair of chrome reverse cone mufflers spitting gases at 45 degrees. The old airbox and starter have been covered with more of the highly sought after in house fibreglass work and clean up the thumping twin tremendously. The Bing carbs now draw air through a set of pod filters, with new leads and hoses ensuring fuel and spark is provided without any interruption. With a beautiful roller on their hands it was time for the lads to start adding all the bits and pieces that make a motorcycle functional. Craig’s hatred for heat wrap extends to tin headlight ears and so a new pair were CNC machined to mount the new smaller item. With this done it made sense to totally rewire the bike as there was no room to hide it all, birds nest style, in the new light housing. The lengthy process has resulted in an ultra clean look with the relays and main wiring harness under the tank and a new battery under the seat. The new electrics package includes an Acewell digital tach and speedo that has the idiot lights integrated for a nice clean look. Adding to that clean cafe racer look a new set of clip-ons was fitted up that wear new switchblocks, gum grips and bar end mirrors. But with the new bars fitted the standard top triple clamp just looked totally out of place and Thor’s machining skills were again put to good making an entirely new billet item. While at it he machined a new billet fork brace that gives the front end a much more positive feel. With the wheels painted black and some new Michelin rubber thrown on Craig could took the BMW for a shake down run. What he discovered was that for a bike with so much custom work it needed very little in the way of sorting, a bleed of the brakes and it was time for more miles. To get the new rear end setup operating perfectly they re-gassed the rear shock and added a slightly stiffer spring. Which is all part of the Route 62 Customs appeal, beautiful bikes that are no trailer queens, with this BMW now known as “Number One” already having done more than 1000 km. The R100 would have done many more and been finished sooner if it wasn’t for the fact that Craig and Thor have had orders flooding in before their first bike was even finished, with plenty of demand for their fibreglass and carbon fibre parts as well as CNC machined items. So the operation is expanding and a new workshop in future planning, already they’re working on another BMW for a customer, a Guzzi 850 and a Harley with all the fruit. Not to mention the fact they also do cars and there is a BMW 2002 in the works. Route 62 Customs might be a new shop but when orders are coming in before you’ve even finished your first build and the result is as good as this, “Number Ten” can’t be too far away!