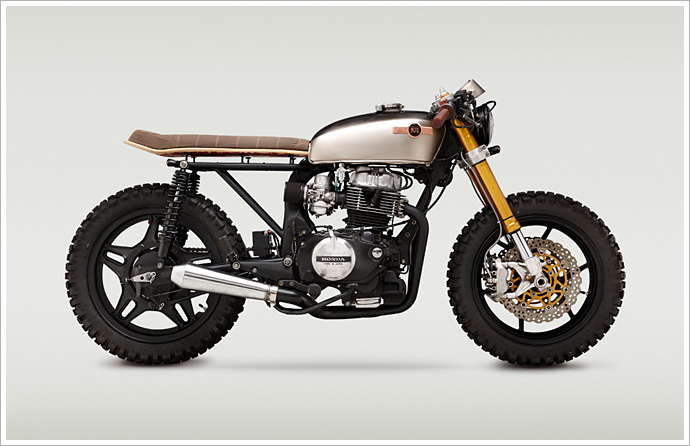 Many people, us included, will strenuously argue about the artistic merits of custom motorcycles. From the raw materials to the choice of metal finishes right down to the minutiae of headlight placement and visual flow, in the eyes of the faithful anything can be considered a work of art. Be here’s a crazy idea – what if a bike was not only a work of art in itself, but actually included a work of art as part of it’s asthetic. What if you commissioned an artist to create art for your bike? What if the bike you created was actually a kind of rolling art gallery? Sound crazy? Then welcome to the mind of John Ryland and his Classified Moto Team with their latest creation, an artsy Honda CB450T that goes by the nickname of “The Fox”. “This one is a 1982 Honda CB450T Hawk, which we nicknamed “Le Renard” – French for ‘The Fox’. It was commissioned by Justin Renard of Brooklyn, New York. He had some specific design elements he wanted to see incorporated — atypical materials like wood and waxed canvas, a splash of red and some subtle graphic element to give a nod to his last name. But mostly he wanted a lightweight curb hopper to conquer the battered pavement in style.” “The bike was sold as a Level 2 build (indicates a modern front end swap) but for aesthetics we ended up re-working the entire back end of the bike as well. We were building a Level 1 CB400T at the same time and modified the frame in a similar way. To me, it just looks a lot cooler than the swoopy, bendy stock frame. The mounts for the Progressive Series 12 shocks were relocated as well for a rock solid feel.” “I suppose the focal point of the bike is the seat. The pan is made from a skateboard deck painted by Richmond, Virginia artist Kristy Heilenday. We looked high and low for a vintage deck with some kind of fox graphic on it. No luck. So we commissioned Kristy to do something that fit the bill. The final art is of a fox lying on his back in a bed of red flowers with a wrench in his mouth. I think it’s a 14mm. Ha. We were under a time crunch when we were shooting the bike so we didn’t get detail shots of the underside, but Kristy has a few on her website. The seat was shaped in house and upholstered by Richmond’s Roy Baird.

Justin provided some military style waxed canvas which worked out great and will only look better with age. To help showcase the deck artwork, we elevated the seat an inch or so off the frame rails. Makes it easier to see ‘Le Renard’ underneath.

The front forks, brakes and wheel are all from a 2005 Kawasaki ZX6R attached via a Classified Triple Tree Conversion with a custom billet aluminum upper clamp. Justin liked the idea of clip-ons, which we finished off with vintage brown grips. The speedo is a Danmoto digital unit with a traditional sweeping needle. It’s mounted in a custom nickel plated housing designed by my buddy and author Matt Crawford.” “Greg Ownby, our mechanic, rebuilt the 30 year old motor and simplified the wiring harness which now resides mostly under the fuel tank. A tiny Shorai Lithium Ion battery powers everything and provides 240 cold cranking amps to the starter. The tank is a Honda CB350 model, nickel plated with a two-tone candy black stripe and copper CM badging. The carbs were jetted to match the Uni filters and the 2-into-1 exhaust.

This bike is definitely a unique look for us. It’s kind of all over the place with genres which made it a lot of fun to build. We had great unveiling evening at E3 Motorcycles in Brooklyn last month. It was the perfect way to cap off the project with a bunch of great people. There hasn’t been a lot of time to kick back and drink a beer lately, so it was awesome.”