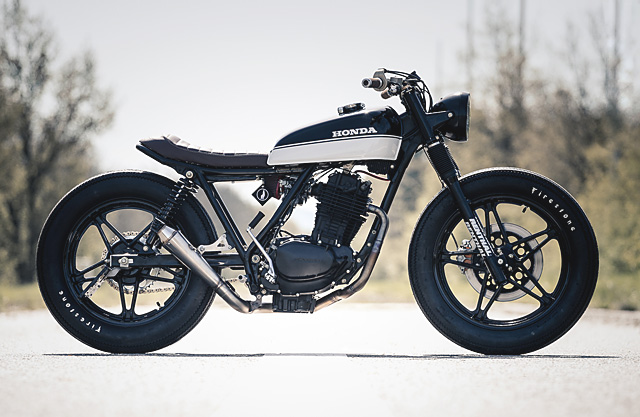 With the big manufacturers, corporates and TV shows dedicating large sums of money to the custom motorcycle scene it is easy to forget that its foundation has and always will be home builders on tiny budgets scrummaging through scrap yards for that must have part. We can all dream of our ultimate ride, a $100k to spend and the skills of the words great fabricators at our disposal but the reality for most of us mere mortals is a few grand for both bike and bits. As a 21-year-old student from Liège in Belgium, Jordan Froidmont found himself in this very predicament but has found a way to make his dreams come true with a little left field thinking and a lot of hard graft. After three years of work he’s turned Honda’s forgotten FT 500 Ascot into a stunning street bike and is now filling the Belgian air with the sound of a screaming single. It was also a 500 single that Jordan desired, a Yamaha SR to be precise, with its classic looks and host of aftermarket parts making it such a favourite for all. But with his head in the books and on a student’s budget the price of the popular Yammy was just too much and he started to think of more affordable options. The answer came in the form of a 1982 Ascot that had been sitting idle in a damp garage for more than ten years and despite its shocking condition, the low kilometres on the clock convinced Jordan he was onto a winner. Knowing the Ascot was going to take a lot of clever tricks to get it looking as good as an SR he sought out the help of a friend, “My objective was to purify and simplify to the maximum the bike, I started with the help of my friend Florian Halleux from Classic Motos Liège.” The first challenge was to strip the bike back to its bare bones, clean it up to see what they were working with and formulate a plan of attack. The bare frame was cleaned up with the side cover locating tabs and other brackets removed and any imperfections sanded smooth. The swingarm got the same treatment with just the rear shock mounts left before a new rear subframe was fabricated to perfectly match the lines of the seat to be used. The stock muffler brackets were cut off and the frame and swingarm treated to new galvanized nuts and bolts before the whole lot was coated in hard-wearing black paint. Then it was time to sit tanks on the back bone and decide what looked best, because the standard item is quite simply a shocker. A decent condition Honda CB360 unit was found and Jordan loved the look but it was no straight forward swap. To clear the wide back bone the tunnel had to be heavily modified and to make sure the internals were good it was treated to a full clean and reseal to ensure no dodgy flakes of rust ended up inside the engine. With the tank sitting right new mounts had to be fabricated to hold the CB tank in position and capture the lines Jordan was going for. Then it was over to painters Fortemps to prep the body work and lay down the colour on the old Honda tank. Wanting a classic look the decision was made to go with a dark navy blue on the top half of the tank with white for the lower sections broken up by a single colour matched stripe. With the factory badge work retained and a new chrome filler cap fitted up the looks of the bike are instantly transformed to something far more beautiful than the blocky Ascot’s aesthetics. With paint being laid down Jordan also sprayed the classic Guzzi headlight supports for the build that add a little Euro flavour. To match the paint work Jordan headed over to Tex-Air Seat Covers in nearby Herve armed with the dimensions of his bike and the lads stitched him up a classic tracker style seat in quality dark brown leather. One of the things that had attracted Jordan to the Ascot in the first place was its engine, a 500cc single just like the SR500 he had been dreaming of. To be fair to the little Ascot, while the SR is far more sought after the Honda engine is superior in almost every way you care to look at. Coming from the XL platform it has more horsepower, more torque, bullet proof reliability and responds exceptionally well to modifications. If it had one weak point it was the starter motor that had been added for the urban Ascot, so Jordan had Florian from Classic Motos remove the starter and associated wiring and cleverly convert the bike back to kickstart. The low kilometre engine was ticking over nicely so just a new galvanized bolt set, a lick of paint and some new exterior component gaskets were needed. Then Florian set about hand forming and welding the stunning 2 into 1 stainless steel headers with custom muffler and a new handmade bracket. With the mechanicals taken care of it was time to bring the suspension up to scratch and give the bike the stance to match its new looks. The front forks have been rebuilt to take a good 12cm of ride height out and the lower legs painted to match the frame. Out back the standard shocks are very spongy from the factory so they’ve been replaced with new units with progressive rate springs to give a sportier ride. Happy with the standard rims Jordan gave them a coat of paint and wrapped them in Firestone Deluxe rubber. But he wasn’t so pleased with the bite provided by the standard single pot front brake so it’s been swapped out for a much more impressive twin piston Brembo item. Not a bolt on piece Jordan and Florian took some heavy stainless and fabricated a bracket that would mount to the standard forks and position the Brembo perfectly over the factory front rotor. Up on the new bars Jordan has added a powerful Magura master cylinder and lever with braided line to prevent fade or bursting, which is good insurance given they’ve also deleted the rear brake. To do this a bronze spacer was machined up to fill the void on the rear axle and loving the look Jordan also did the same for the fork tops. The bars also wear a beautiful set of leather wrapped grips with machined aluminum ends from Brooks and an MX push-pull throttle. The only other thing up front is a single switch that turns the headlight from low to high beam as the desire was always to create an ultra-clean look. To make this work a fabricated battery box under the seat holds a lithium battery, CDI box and the key switch. The rest of the wiring loom has been cut out and terminated so here’s hoping the Belgian boys in blue are on the forgiving side. Having gone to the effort of converting to kick-start and fitting up a nice new lever, Jordan couldn’t bring himself to leave the factory footrests so a set of machined alloy items with modified linkage for the gear change take care of business. From a standing wreck of an ’80s bike that was neither a looker nor popular Jordan has taken the Ascot and given it a fine classic make over to produce a unique street bike on a budget. It all couldn’t have happened without the great support of his father and Florian’s mechanical wizardry. But now the custom bike bug has truly bitten, not content to just ride his completed steed his picked up another left field selection, a Suzuki GR650, and it too is getting a new lease on life the Belgian way.