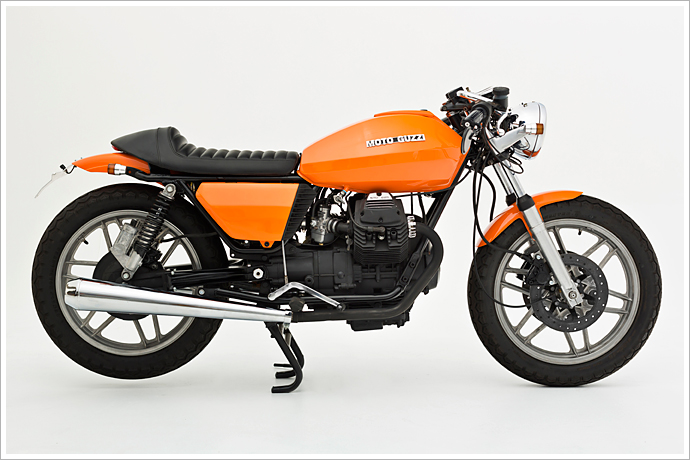 Halloween has really taken off in Australia over the past few years. From being a non-event a decade ago, it’s now quite a ‘thing’. Which got us thinking about posting a Halloween bike last week. But what are the chances, right? Unless we were to go all Orange County Choppers on your asses, we weren’t getting our hopes up about finding any kind of Halloween-themed build that didn’t suck. And then like mana from heaven, our mates from Brisbane’s Ellespede Customs dropped an amazingly sweet, pumpkin orange Moto Guzzi right in our hot little laps. And what it’s lacking in skulls, billet and chrome cobwebs it’s more than making up for in taste, restraint and, well, orangeness. Meet the spookily quick ‘EB053’. “After seeing the eBay-bought bike our client Nick C. asked us to collect a few months back, I admit to thinking he’d bought himself many headaches,” recalls Ellaspede’s Steve Barry. “The bike was a 1982 Moto Guzzi V50 and looked like it had been used previously as a farm bike complete with cow manure. However, as the build progressed, it became apparent that this neglected Italian had the potential to produce an end result that would go on to surprise more than a few.” “Nick just wanted to get it running and registered to ride around on, with a view to doing some mods down the track – yeah right! How many of us start on projects with that in mind? As these things go, once the bits started coming off, problems start emerging and ideas started flowing, that original ‘best laid plan’ become just a faint, best forgotten memory.” “Nick did have a budget though, so there were some compromises made during what became a semi-major build. Nick’s skills as a fine jeweler came in handy when it came to restoration of the gauges (which were duly freed from their 80‘s plastic housing) and the finishing of various components. The first surprise was the engine. After replacing the car-sized starter motor and battery, the small-block North/South V responded well to carb and electrical attention, bursting into life quite convincingly. Some fine tuning had it running well with no other major work required.” “After the engine work, the build progressed in stages allowing plenty of thinking time. ‘Hey Nick, if you were to just do this now rather than later, it will save blah’ And so it went. Frame mods were done to suit the aftermarket seat and the re-shaped original rear guard. An aftermarket taillight replaced the protruding original and tucked nicely into the gap between seat and guard. Indicators are Posh items mounted at the front on new headlight mounts. Nick found the headlight, which lent itself to housing the pilot lights.” “The orange duco, applied by Nick’s mate Col, is a nod to Nick’s business’s corporate colours and once again surprised us as to how good it looked when it all went together. New seals and gaskets for the drive shaft and a rebuild of the Marzocchi rear shocks stopped the leaks.” “Hydro-blasting took care of the finish on the wheels and carbs, a frame and engine repaint cleaned up the undercarriage and polishing put the finishing touches on the other items.” “Whilst this build was not an all-out custom, it managed to transform this former small-town Italian farmer into Sofia Loren while surprising many along the way. We hope you like it.”