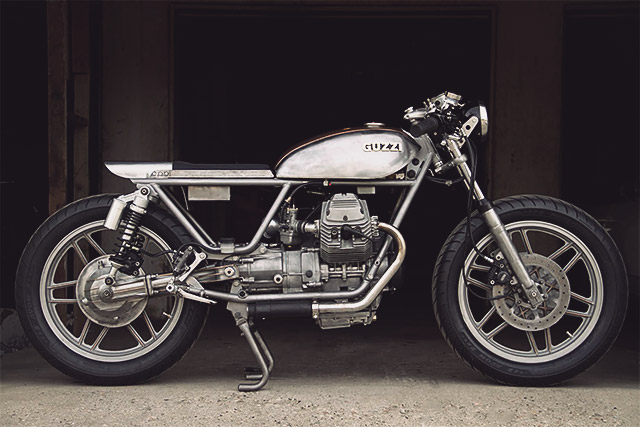 You hear a lot about ‘barn finds’ in the custom bike game. In case you’ve been living at the bottom of an oily sump for the last 50 years, a barn find is exactly what it says on the tin; a bike you find abandoned in somebody’s barn and then rescue. But in a first for us, we’re happy to inform you that we think we’ve found something that will revolutionised the genre. Thanks to Wyoming’s Reed Merschat and his persistence, we’d like to introduce to the the ‘Freezer Find’. What is it, you ask? Why, it’s a bike you pick up when it’s owner takes a little trip to cool off in the state penitentiary. “It was the fall of 2012 when, as usual, was taking a circuitous and indirect way home ‘Scouting’ for random and neglected mechanical goodness,” Says Reed. ”Catching my eye next to an apartment complex on the sidewalk was a rather beat and poorly bastardized Moto Guzzi V50. Like I’ve done many times before, I left a note stating I’d be interested in buying if you’re wanting to sell. Usually met by silence, this M.G. owner broke the odds with a call. ‘There’s no title but I do have a bill of sale’ he started off with. As we continued conversation, he continued with ‘I just got out of jail and need the money’.  This set the stage for a ‘budget build’ inspiring me to take on every component and challenge of the build myself, taking only to outside assistance for hydraulic lines and parts.” “The bike sat in my garage as I mentally planned on its future until dismantling began in the winter of 2013. I had a vision for a raw, metallic racer with aggressive appearance and feel. My sketches started with a much smaller tank to expose the beauty of a flying V, dirt track inspired seat and a contoured rear cowl concealing the taillight. Equally sized sport-inspired tires, race type hand controls and sport sets moved far back were included in my vision.

Once taken down, I attacked one project at a time starting with the engine once separated from the frame. I drained all fluids, replaced seals, bead blasted and clear-coated valve covers, thoroughly degreased and wire brushed all components independently. I cut off all extraneous mounting tabs, kick stand, original peg mounts and head tube lock from the frame to clean it up. Originally I had an old Honda SL fuel tank I intended on using but by some twist of fate, I was able to intercept a 1970 Suzuki TS250 tank atop of a trailer bound for the landfill that fit the bill perfectly. With tank in hand, I created new mounting tabs and brackets to hide the electronics under the tank. I fitted the tank with dual fuel ports and simple petcock valves. During the pre-assembly I adapted all of the controls and worked out any additional mounting needs to weld. The frame and wheels were then bead blasted to raw material and clear coated.” “Because of my seat pan design choice, I made a hanging battery box to hold the compact lithium battery and electronic make-up. The bikes wiring is completely custom and without use of any original harness. I relocated the original ignition to the right side of the frame gusset back from the head tube and mirrored a momentary push button starter on the left side. The single speedo is original to the bike adapted to the top clamp with a bracket salvaged from a 1976 Yamaha Chappy. The Chappy’s headlight is also salvaged for the Moto Guzzi.

I modified the bulb assembly to take an automotive H7 style bulb for ease of maintenance and installed a toggle switch. The original top clamp bar mounts were cut off and ground smooth. I used TP clip on bars to achieve the sport positioning desired. I picked up a salvaged rear brake master cylinder from a GSXR 650 and adapted it for the new peg position. The gear-shift lever was reversed to accommodate the new peg position and offer a GP ‘down, down, down’ gear pattern. I had a vision of ‘shorty’ exhaust and was able to use the original pipes back to custom-made silencers ending before the foot controls.” “For final finishing I chose a metallic copper paint for inset color finished with a black hand-striped border. The remainder of the tank and rear cowl were wire brushed to accentuate the ‘metal’ look and clear coated. The bike is a very unique ride that ended up about 40lbs lighter than stock with very aggressive positioning. The Avon Roadrider AM26 110/90/18 on both front and rear take up the majority of any available space offering great traction on the road.” “This is my first custom bike build and was done on a serious budget. With some luck and fate in finding salvage parts and not subbing anything out, I was able to complete the bike for less than $2000. It’s been a learning experience and I’m already looking forward to the next build. I know there are some things I’d do differently next time but guess that’s always the case.”