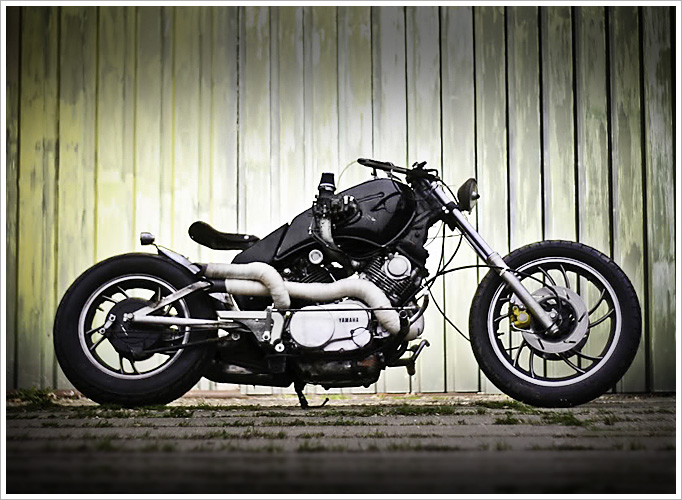 I figure it’s best, in the interests of being fair and open, that I disclose a shocking and personal fact. I own a Virago. Oh yes, very funny. Laugh it up, ladies. Say what you will, but you know what? I’m an XV owner and proud. Now mine’s not an 920 jobbie like you see here – she’s a MY 1980 XV 750. But let’s not spilt hairs here, a Virago’s a Virago. Every piss weak, Harley Davidson copyin’ inch of them. So just how does such a seemingly lame-ass no-hoper bike suddenly become the darling of the custom scene? Through a series of sow’s ears into silk purses by Classified Moto, Doc Chops and Zero Cafe Racer – do some Google image searching if you are drawing a blank. And it might well be time to add another name to that list. Meet the Virago that Shed-built, um, built. Here’s Michiel. “I run a site called shedbuiltbikes.com and I built the Virago together with a friend of mine, Vincent Verdouw. He is at this moment building a Ducati cafe racer for himself, and we bought an SR500 together since the Virago – it is now finished and we want to continue building bikes.” Yes, yes. It has pipe wrap. Can we all just pretend the flame war has already happened and ignore it?

“It all started for us years and years ago. We both had sportsbikes, he had a ZX9r and I had a YZF750R. We bought a Honda CX500 to see if we could turn the ugly, very rough, little bike into something decent. The end result was pretty cool – but that’s another story. After the CX we bought the Virago with the sole purpose of doing something wild. I think we succeeded…” “The seat is off of a bicycle.
The seat spring is made of an old
MGB leaf spring my brother had lying around”

“Here’s a list of changes. We obviously made our own exhausts. We bought clip-ons and did a lot of work to those, too. We made the rear light 100% ourselves on a crappy lathe. The rear fender used to be the front fender. The big box on the side is for the battery, a XV needs a healthy battery (I hear you – Andrew), so we decided to use the original one and put it in an easy, accessible place. The seat is off of a bicycle. The seat spring is made of an old MGB (car) leaf spring my brother had lying around. The inlet is made of old car exhausts that we got for free at our local car shop. The carburettor is a Solex downdraft carburettor of an Opel Kadet B (again, a car). The headlight is a fog light of a tractor. We raked the frame, as you can see.” “The brake pump is a cable driven BMW brake pump, allowing us to use a reversed (and adapted) brake and clutch handles form some classic bike – a Solex, I think. The speedo off a Suzuki SP370. We made the side covers behind the tank from 3mm steel we got at a local salvage yard. It took quite some hours to hammer that into shape…” “The side mount is made form a bearing puller tool and the forward controls are 100% home made. The hand grips are made of tape for tennis rackets. The wiring loom is 100% home made and uses a Honda CX500 regulator. We had to use a fuel pump and we bought a cheap one for a rally car.”

And there you have it – one of the most original and inspiring Viragos you’re ever likely to see. Michiel has sent us plenty more bikes that he has, or is, customising – including a CX Honda that literally made me say “wow” out loud. Stay tuned for more right here.