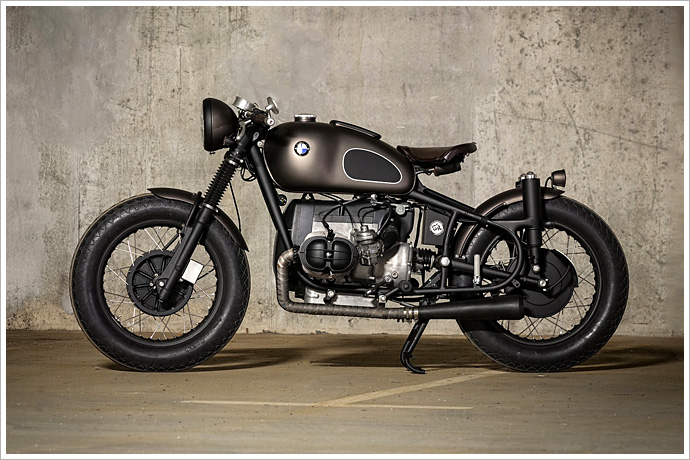 You can feel their attraction. Like the force of gravity, they seem to exert a powerful yet invisible pull on all bodies near and far. You can try and avoid them, moving in an elliptical orbit so that you fool yourself into thinking that you can escape their grasp, but somehow you always end up spiraling inwards. Are we talking black holes? Dying stars? Galaxies? No. We are talking Bayerische Motoren Werke Motorrad; BMW motorcycles to the layman. The Americans used to say that eventually, all riders will end up on a Harley. And that may be true of for the Amerikanische volk, but as for the rest of the world I’m convinced that a boxer twin is our true destiny. And if I could choose my destiny, it would be this bike. It’s just about the cleanest, most detailed Beemer build you will ever see. Blaž Šuštaršič is the owner of ER Motorcycles and creator of this bike, which he calls ‘The Mobster’. “Since childhood, motorcycles have been a passion and a way of life for me. When I’m not reading about them in magazines, I’m almost certainly surfing the Internet for additional information about them. With the help of the latter, I like to tear the down and rebuild them in my head. Then I try to realise my ideas in the workshop. Sometimes I see myself as a bike surgeon, since I like to look at every single piece of motorcycle. I try to make sure no detail is left unconsidered.” “In 2009, I saw a business opportunity and my dreams suddenly became a reality. I opened my own shop. So far we’ve produced several unique motorcycles, and we have ideas for many, many more. In fact, I like to keep the workshop busy so we usually have two projects overlapping – it really keeps us on our toes.” “About six months ago, I began working on a new project named ‘Mobster’. The now completed project is a full motorcycle redesign, which you might have seen on the Slovenian roads if you happened to be riding there this summer. It was an extremely demanding job, and required us learning a vast amount and really putting in some late nights. But, as you can see, it was all worth it.” A seat with your own tag. Now that’s attention to detail

“It’s hopefully got a touch of the gangster about it, but also with a refined look; like a well-dressed gangster. The front forks are from a BMW R50/5 and there’s plenty of other parts from that bike and an R69S. The tyres are Coker Diamonds at 4.50-18″. The clip-ons are Tarozzis. The exhaust and leather seat are both ours. There’s also a Motogadget Classic speedo, some custom leather grips, custom front and rear fenders, new electrics and a rare sport “Schorsch Meier” fuel tank.

For me, the visual elements such as the Frozen Bronze colour, extra equipment and the leather seat is what give the motorcycle its unique look. Overall, the bike is a really beautiful thing to see in the flesh. And that’s before you turn the engine over.” Blaž took time out to mention the rest of his team; his chief mechanic Danilo Henigman, mechanic Primož Vindišar, turner Janko Rudolf and painter Janez Žebalc. And from what we can see, Blaž won’t be looking to upskill any time soon.