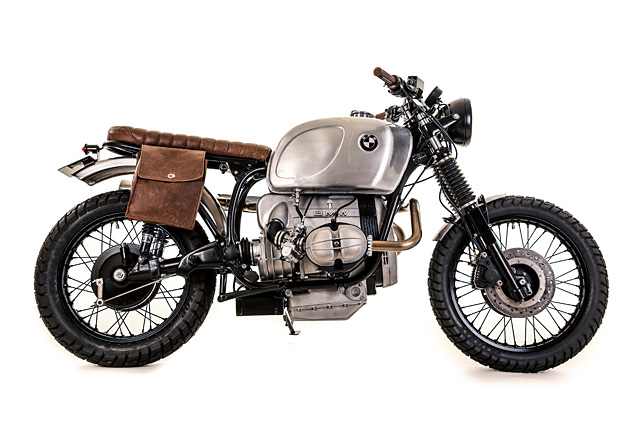 While possibly the least effective language to serenade someone, the German dialect has an unusually large repertoire of words to describe some very particular feelings. For example – deppenfahrerbeäugung is the glare you throw a bad driver after overtaking them and backpfeifengesicht means a ‘a face that asks to be slapped’. UK-based Kevil’s Speed Shop have seized this wonderfully descriptive language to name their 1983 BMW R80 the Uber – a German prefix meaning anything great or superlative. And also an affordable crowd-sourced taxi company. But mostly the superlative bit. The last 12 months have been an incredibly busy period for Kevil’s Speed Shop, rolling out no less than 15 BMW customs – including their take on the gorgeous new BMW R nine T. They’ve gone from a typical small, specialized operation to customizing relative swathes of Bavarian motorcycles with Krupp-like efficiency. The owner, Kevin Hill, is particularly proud of the way his workshop has managed this increase in business – and is also a little bit chuffed at how this 80’s boxer-engined twin came into his possession. The ‘Uber’ arrived at Kevil’s from Germany – a gentleman who is associated with a motorcycle luggage manufacturer of some repute approached him to build the bike, which he then shipped all the way from Munich. How’s that for a journey? The bike was bred in Germany, given a work over in England and then sent back to the Fatherland. Similar to a Mercedes F1 engine or a Luftwaffe airman. When the customer visited Kevil’s Speed Shop he had a pretty clear idea of what he wanted – an alloy-tanked street scrambler, with a high-mounted exhaust system and a distressed leather seat. Yes, that tank – which I initially thought was just a /5 toaster tank that had been stripped and polished – is actually hand-crafted alloy. That’s a particularly nice touch on the bike – there was a cheaper, albeit messier option available but the guys at Kevil’s decided to go to the effort of fabricating an alloy tank from scratch. It really seems like Kevil’s aren’t satisfied with the easiest options when building a bike – look at the bespoke stainless exhaust system and its stubby muffler. It navigates its way just around the petcock – and while I certainly wouldn’t be game to play with the fuel tap while the pipe was hot it’s hard to argue with the tolerances they’ve worked to. The fenders were also made from stainless steel with a brushed finish that was clear coated and the rear subframe has been swapped out for an assembly manufactured in-house, which also mounts some tidy little LED indicators. The pannier was put together with the same leather used for the seat – made just the right size to fit a tablet. And just behind the saddlebag there’s a power outlet – enabling the device to be charged on the run. To give the frame that open, light appearance the battery was moved under the transmission. There’s also a whole heap of other work that went into the BMW that remains unnoticed – the usual sitzfleisch (‘seat meat’ – the more routine or dull part of a task) that comes with any overhaul of a classic bike. Kevil’s are quick to point out that this occurs to all the motorcycles that go through their workshop – the brake system was overhauled, the frame was tidied up and powder coated, the engine and transmission was refreshed and the fuel system replaced. When the bike was delivered the customer must have been delighted with the result. They’ve received a really good-looking BMW that doesn’t really sacrifice much in pursuit of aesthetics. It’s got fenders (albeit short) on both ends, capable Dunlop Trailmax rubber and underneath it all a boxer engine that will probably outlast religion. The bike, like everything to come out of Kevil’s, is legal to ride on the road and comes with 12 months registration – surely enough to satisfy the most cynical internet handschuhschneeballwerfer Pipeburn readers out there.