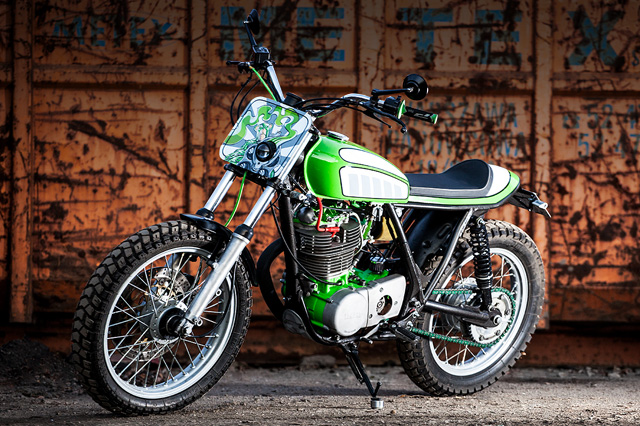 Here’s something that you probably didn’t know. The movie ‘On Any Sunday’ not only won an Academy award, invented the world’s first helmet cam and single-handedly changed the Western world’s attitude to motorcycling – it also introduced large areas of the world to the wonders of both Flat Track racing and BMX bicycles. Which, if it’s not too long a bow to draw, means that it’s probably also responsible for today’s star bike. Meet Poland’s Pan Sławomir and his very mean, very green flat track Yamaha, ‘Storm Buddy.’ “My name is Sławomir and I am 28 years old. I grew up and still live in Warsaw. Although I’m not a professional mechanic, I was have always been interested in anything with two wheels. In my youth it was BMX bikes, but when I started to earn some money and I could afford a little more, I decided to get a motorcycle.” “After several years of riding a stock bike, me and my best friend Paul decided to build our first custom bikes – my choice was a Yamaha XS400 in a café racer style, however it turned out that it just wasn’t what I was looking for; it was way too uncomfortable for daily rides and to be honest the build was not properly done. It had some major flaws – mechanically and visually. Then I realised that I was probably capable of building something decent myself, something that I would be proud of, too. So I decided to prove my theory and build myself an SR500 tracker.”

Then Sławomir found someone selling an ‘83 SR500 near Warsaw. It was in decent condition and was going for a reasonable price. And so began a process that lasted nearly two years. Yes, the daily grind got in the way, but Sławomir notes that there were also delays while waiting for the various paint, metal and blasting subcontractors or simply because he had more pressing things to do. More pressing than build a bike? Do such things actually exist? The work all began by cutting, redesigned and making the bike’s rear frame section – a job that has . “After that it was time to fit the fuel tank; it was a gift from a friend who found it in the scrap yard. I don’t know exactly what bike it comes from, but most probably it was a small 200cc, 2-stroke Yamaha.

Then came time for the engine. From the beginning I wanted to paint it to match the overall design, so I had to disassemble it down to the last screw to prepare it for glass blasting, a head shave, a bore and a larger, higher compression piston. After painting the selected parts, it was rebuilt with new genuine bearings, seals and gaskets. In addition to the new engine, a Mikuni TM36 carburetor was fitted.” “Next on the list was the lights and electrics. I’d decide that the whole flat track style really required a number board, which I handmade from steel with an aftermarket headlight built-in. I’m also a big fan of the ‘clean look’ so I decided to build the tail light into the frame. Then I added a new, smaller battery under the seat, relocated the ignition there as well and rewired all the electrics.” Of course, A faster bike needs more powerful brakes, so Sławomir repurposed some Brembo 320mm discs with two piston calipers from a Yamaha FZ6 and master cylinder from a Kawasaki ER5 to supply the squeeze when needed. Of course, the bike’s wheels, frame and rear arm also got some attention in the form of a good ol’ sandblasting and some new powder coating in addition to some new bearings, seals and spokes. “The paint job is from Drozd Design and is intended to reference the Yamaha racing designs from 70’s. As mentioned, the bike was meant to be as comfortable as the street tracker style will allow while keeping it street legal, so it was necessary to add some mirrors, indicators and a handmade front fender.” “And last but not least, I have to thank my best pal Paul who spent countless hours helping me with this project. I named it a “Storm Buddy” as a nod to him. It’s also a reference to the ‘Ted’ movie and, obviously, so is the teddy bear paint on front plate.”