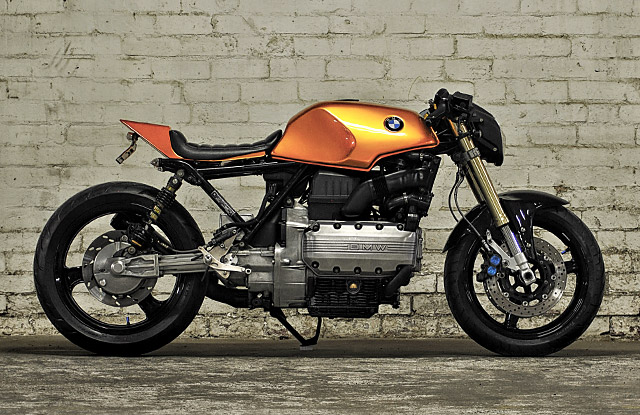 The late 70s was not an easy time for poor old BMW Motorrad. With mounting pressure from the European Union regarding emissions, and their all-too-slow awakening to the fact that Japanese motorcycles were eating their lunch, the Germans were staring down the barrel or irrelevancy. Suddenly, water-cooled fours were all the rage; the 70s journo’s penchant for top speed tests always left the boys from Bayerische with das ei on their faces. What they needed was a unique, powerful, water-cooled platform – and quick. In a classic piece of outside-the-square engineering, they began experimenting with a Peugeot car engine which they decided to lay down in a ‘longitudinal four’ configuration not seen since the pre-WWI-era. And the rest is history – a history which Paul Hutchison from Melbourne has successfully reinvented with his über K100RS. “I’m Paul Hutchison (Hutch) from Melbourne, Australia. I’m an airline pilot, with a military flying background. I was inspired by Robrock’s K100 build I saw on BikeExif and started looking. I found one unregistered, in Adelaide. I bought it sight unseen, and did a 1600km trip to collect.

Kicking the build off, I wanted to blend the café racer style with street fighter, taking what I thought were the best elements of each. I had no clear plan before starting, it evolved as the build progressed.” After countless hour of internet trawling, Paul made the decision to spend that little bit of extra cash and go top shelf. The BSK SpeedWorks rear sets were made to order, fitted perfectly, and look like works of art.

Paul was keen for the bottom line from the tank to flow smoothly through to the tail-piece. After making some rough drawings, he mocked something up using old plastic chopping boards. Then his local fabricator managed to magic it into a perfect aluminium replica of the plastic piece. “My mate Pete of Peter’s Panels offered to do the paint job for a couple of bottles of scotch on the condition I did the preparation work. The colour is from a new range called ‘vibrance’. It was a nod to BMW’s 70s colours, but with added metal flake. It turned out the colour I chose is called “hornet orange”. As I flew hornets in the RAAF, the bike now had a name, ‘The Hornet’.

About four months after completing the build, I took it to Tasmania for a week of riding. On the third day my good friend Kev managed to lose the front end while braking into a corner. The resulting low side caused enough damage for the bike to be an insurance write off.” Down but not out, Paul bought the wreck and used the rest of the pay-out money for a full rebuild. Not wanting to put in all the extra time and effort just to end up with the same bike, he decided to do some upgrades. Again. He found out he could get four-spot calipers on the front if he could manage to install a complete K1100 front end. “I decided that if it was worth taking the bike five years into the future, why not something more like twenty years?” Paul searched the wreckers for a clean upside-down front end. He wanted a 3 spoke front wheel to match the K1100 rear wheel he had sourced. A ‘00 Yamaha R1 was deemed the best solution. He went back to Valley Engineering, his fabricator, to mate the Yamaha clamps to the BMW post. Despite the myriad issues involved, the end results couldn’t look prettier. And as a finishing touch, the headlight was replaced with a Yamaha MT-03 unit from the UK. Paul says that the finished bike is better than he could have ever hoped for and notes that it now rides like a modern motorcycle. No doubt the Pirelli GT tyres and the new front end have truly transformed the handling, and those brakes are probably more than equal to any modern K1200R. Lucky bastard.