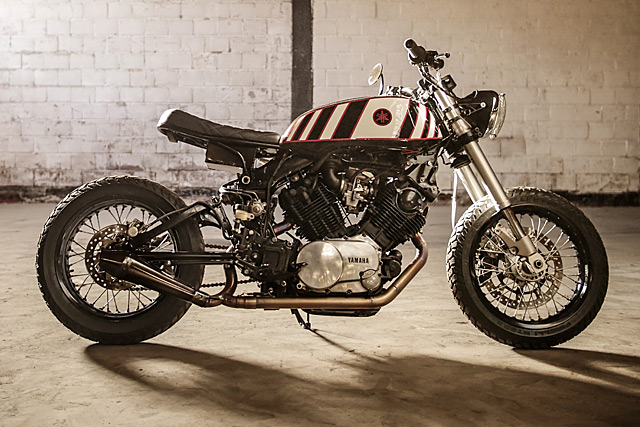 Moto Adonis head honcho Daan Borsje will tell you that his goal is not just to resurrect near dead motorcycles but to re-purpose them for the exact demands of his customers. This leaves him with the creative freedom to take any old busted bike and turn it into anything he can dream of and design and that’s exactly what he’s done with this 1984 Yamaha TR1. From their digs in an abandoned factory in Roosendaal the team received a call from a customer in Amsterdam who wanted just such a bike, but a Scrambler built for his city streets and not muddy rolling hills. “It’s a hard bike to find in the Netherlands, but we have managed to find one and give this bike a bad ass scrambler style look!” But looks are only surface deep and when you scratch at this TR1 you start to find more than a few quality components and just a touch of Supermotard DNA for good measure. Getting the build started was the traditional customisers routine of picking the pieces to stay and arranging them for their transformation and making a big pile of all the bits that are headed to the scrap heap. With a bare frame to work with the modifications could be made to accept the changes that were to come and any tabs and brackets that wouldn’t be used have been ground off and smoothed out. Once coated in a fresh lick of black paint it was out with the old subframe and in with the new. The entire unit is handmade in house from rolled steel tube that mounts to the factory bolt positions for a clean and tidy look. With it’s rear hoop kicked up ever so slightly it also creates the perfect base for the seat, which is another Moto Adonis creation, a short, yet well padded, Scrambler item made from black leather with diamond pattern stitching. When it comes to the bodywork the tuning fork logo might be present but there is no Yamaha metal or plastic in sight! This is not a first for Moto Adonis, on a previous Yamaha XV build they fitted a Honda CB400 tank and it worked brilliantly and so once again they’ve gone for a Honda tank to replace the less than attractive stock unit. This tank is a reworked Honda CB750 item, it’s broad shoulders giving the bike a more muscular look. With the modifications made for it to fit the frame correctly a brilliant paint job was laid down that makes the most of the new bulk the tank offers while concealing it’s least charming feature. By keeping the lower section of the tank in black the crease line where the side covers would have once merged is all but hidden with colour and graphics splashed only on the sides. The black vertical stripes with red lines over the stark white base and Yamaha logo is just the right amount of colour while maintaining a tough urban look. But it is far more than looks that Moto Adonis were going for and the focus of this machine is improving it’s handling abilities and super motard and high end superbike parts are just about the best way to achieve that goal for a bike designed to rip up city streets. The front forks have been adapted to the Yamaha frame and come from the hard charging Suzuki GSX-R, the build quality, adjustability and USD arrangement all superior to the telescopic items fitted to the TR1 from the factory. The adjustable rear mono shock that mounts into the frame is retained and is a crucial design element in maintaining the narrow lines of the V-Twin base. The Nissin brake caliper is from the Suzuki forks with only a single side retained and mounted to a new custom bracket. The reason for the new hardware is the use of a larger single disc from a KTM 690 SM that gives all the bite without the additional rolling mass of a second disc. The reason behind the KTM front disc starts to make a lot more sense when you realise the front wheel is from the same model. The lightweight and spoked rim retains the KTM hub that is adapted to the Suzuki front end before being wrapped in a 120/70 Pirelli MT60 Corsa tyre. A wise choice of rubber for a bike of such purposes when you consider even Pirelli describe it as having been designed for “fun bikes on asphalt surfaces”. Out back more KTM SuperMoto hardware is offered up with a drilled disc clamped by a Brembo caliper held onboard by another Moto Adonis piece of fabrication. The rear wheel like the front is also from the 690 SM but this time wrapped in a fat 160/60 Pirelli MT60RS tyre. The forgiving profile combined with the lightweight wheel allowing for drastically improved grip on corner exit as the tyre is planted hard into the surface exposing its full width to the ground. The engine has been refreshed but modifications remain relatively mild to maintain reliability and reduce cost, but with nearly a litre of V-Twin muscle there is more than enough power. Two valve heads mean the air cooled Yamaha is a torquey beast and firing off turns is just what it does best. A custom 2 into 1 stainless steel exhaust was handmade at the shop and not only looks the business but adds more ponies and a brilliant burble. The air filter has been left exposed with a combination of polished covers, gloss black and wrinkle finish paint giving the engine a new lease on life. To hide all the electrics and the new battery a box was fabricated that sits below the seat for a clean, wire free finish. Lighting the dark backstreets of Amsterdam is the Triumph Scrambler 7 inch headlight with custom grill should the owner ever be chasing a rock slinging rival. The taillight is neatly hidden under the new seat while tiny indicators can barely be seen but keep things street legal. Small risers sit atop the Suzuki upper triple clamp and hold the perfect Scrambler bars with Biltwell grips. Keeping the riders feet firmly planted in even the most frenzied of riding moments is a pair of motocross footpegs painted in frame matching black. Back on the bars things are kept purposeful with just the essential switch gear, single mirror and master cylinder that sends its pressure down a braided line. The single digital/analogue speedo is a nice modern touch to this otherwise industrial machine. It’s a good thing one is fitted too as the thrilling tight turns and obstacles of the concrete jungle come with low speed limits and you could easily surpass them without notice on this Moto Adonis monster. But that is what this Scrambler is all about, leaving the dirt trails to other similarly styled bikes and testing the limits of the metropolitan environment. In an increasingly urbanised world fewer people take the open roads to work, so if you have to tackle the metro streets then what better way to cross Amsterdam than on a purpose built City Scrambler from one of the best Dutch builders in the game today.