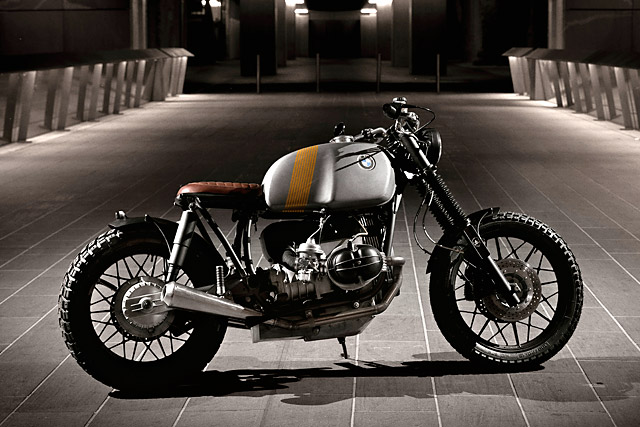 Spare a thought for our poor Austro-Germanian counterparts. While some of the world’s best motorcycle manufacturers came out of the region, they are amongst some of the hardest countries in the world to legally customise bikes in. Life is anything but easy for Teutonic tinkerers. It seems that the local authorities have nothing better to do than ensure that every vehicle on their roads is as dull as possible. This is backed up with heavy fines and sky-high inspection charges if you fail to comply. Enter Slovenian shop and Pipeburn regulars ER Motorcycles, with nothing more than a keen Austrian customer, an old boxer BMW and a love of showing bureaucratic paper shufflers what’s what. The project started off with ER’s Austrian client wanting desperately to realise his perfect bike. He was after something similar to Blaž and the boy’s previous BMW builds, but he was very keen to raise the bar in terms of the bike’s manoeuvrability, power and looks. “Our biggest challenge was the strict Austrian legislations, which made us have to constantly search for workarounds. We were often biting our lips when we needed to make some unplanned changes while trying to achieve our goal. But we kept our eyes on the prize – to build a rough, elegant and street-legal bike.” The hero feature of the bike’s look is clearly the brushed aluminium fuel tank. The boys are quick to point out that achieving the look was not an easy task. ”First of all we had to find a well-preserved donor bike with an undamaged fuel tank to make it work,” Blaž remembers. “The whole process was responsible for a few sleepless nights. And when you finally find a nice, undamaged BMW fuel tank you only get one chance to make it right. In the end it was really worth the extra sweat, because it’s such a cool detail – and it works so well with those yellow stripes, too.” ER’s name for the bike is “Stannum” – apparently the Latin word for tin. Despite what you might assume, it’s not derived from the finish on the tank, as Blaž explains. “It’s like a tin can without a label. You have some expectations based on its looks but open it up on the road you’re in for a real surprise. This thing is a monster, a street-legal monster.” As kick-ass as the bike is, there is also a little touch of romance to it. After a specific instruction from the client, the bike was built with two seats and sub-frames. The differing configurations can be swapped out in a few short minutes, taking the bike from a single to a two-up tourer should the, ahem, situation arise. It’s also the first two-seater ER have ever built.

For the trainspotters out there, the bike’s running Hattech mufflers, Hagon shocks and Haidenau K60 Scout rubber. The front and rear calipers have been upgraded to Brembo units and the ‘bars are a Renthal ultra-low unit. The clock, controls and electrics are from Motogadget. Footpegs are from Tarozzi. As for the ER-fabricated parts, there’s the aforementioned subframes, the seat and pan, fenders and pipes amongst many other smaller pieces. And while they may not have been tested to some arbitrary EU standard that’s seemingly more interested in smothering individualism than keeping you safe, if there was an official test for coolness we’re pretty sure this bike would get the clipboard tick of approval first time, every time.