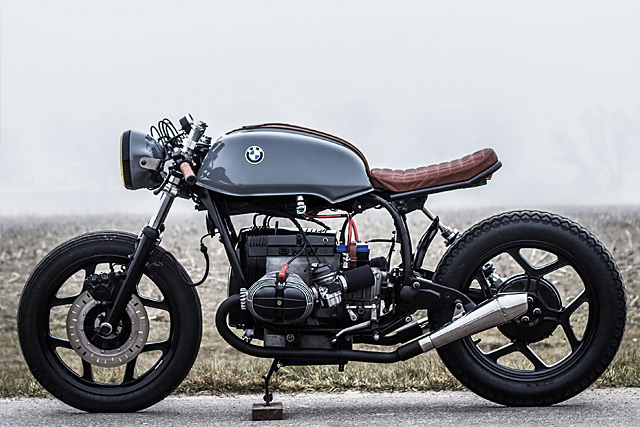 In the automotive world the basic aesthetics of a motorcycle and car could hardly be more different but they have always followed many of the same trends throughout the decades. What else could explain the sheer number of squared off boxes in the ’80s or the silhouettes of sex appeal that were ’60s cars and bikes. But the inspiration of a beautiful woman has been a constant throughout, we’ll have to blame 1980’s fairings on shoulder pads, so when Arjan van den Boom describes wanting the look of his 1986 BMW R80 to be a “Robust gas tank, big shock, small ass and fat rear tire” it’s fair to say the female form was on his mind. As the engineer and owner of Ironwood Custom Motorcycles in Amsterdam, Arjan has been around motorcycles and cars his whole life. He first started with mopeds and scooters at 15, shifted to modifying cars for a while before graduating to the increasingly insane speed of modern Superbikes. But after a few near fatal accidents and plenty of broken bones it was time for a change of direction. Having previously worked for the large Dutch bicycle company VANMOOF and now as project leader for a big OEM turbocharger manufacturer he knows his way around the automotive world better than most. But days at the desk in front of a computer screen was leaving him with no outlet for creativity. So he took a risk, cut back the hours at his day job, founded IWC Motorcycles and with a small garage in which to work started churning out brilliant custom cafe racers, largely a mix of Honda’s and BMW’s. With nearly 20 full builds under his belt since 2012 and his love for cafe racers with a little brat style and a lot of sex appeal seeing no sign of wavering he decided to combine his two favoured marques into the bike you see before you, “The Renegade”. But being an engineer by trade all his builds start with the bike being completely stripped down and rebuilt from the ground up. The R80 frame has been smoothed out and a new subframe fabricated for that small seat look he was after before the whole lot was coated in black. With the bare frame in his hands Arjan then crafted a small, solid mounted rear fender that operates much more like a modern hugger without wrapping too far around the rear tyre. To give the old frame some increased laterally rigidity the rear frame rails are supported by an aluminum plate with Ironwood cut out by a water jet and the front being fitted with a fork brace. With the fundamentals taken care of the styling work could begin to take place and the use of the often dismissed square styled Honda CB750 fuel tank is an inspired choice that completely alters the Bavarian’s look. With a minimal amount of body work on the bike the headlight has been metal worked to perfection and with the yellow lens and black surround becomes as much a part of form as function. Both the tank and light surround were painted an Audi Nardo Grey for an instant pedigree improvement and the old style BMW badge only reapplied to the left side of the tank. Adding even more prestige to the styling is the stunning leather work by Marcel Miller Kustom Upholstery who created the hand grips and battery strap for the build. Before going on to create a piece that is both Cafe and Racer, the fully functional tank strap and finishing out his work by shaping a seat to match the new subframe and covering it in the same leather as the rest of the build. With so much time and effort having gone into perfecting the feminine appeal of the visuals the best way to truly show off the beauty of BMW’s Boxer twin is to keep things simple; It is after all the very the philosophy of a two valve, air cooled engine in the first place. Arjan lets the engine blend in further by powder coating much of the engine black with the carby caps receiving the same treatment. Those rebuilt Bing carbs now get their air from a pair of foam pod filters and the engine itself also received an overhaul for reliable riding. The exhaust is powder coated with a ceramic heat coat so there is no wrap required here and finishes out in a pair of GP mufflers with the dB killers left in place for a touch of civility. A lightweight Shido Lithium battery ensures the BMW will start every time and a custom fuel tap enables the Honda tank to work with the Bavarian’s fuel system. With the initial design calling for some Pamela Anderson meets Monica Bellucci lines Arjan knew the best way to show off those curves was to get them laying down close to the sheets. So the modified front end is now a full 60mm lower thanks to new springs and dropping the forks through the customised upper triple clamp. Those forks might wear the mounts for a dual disc front brake setup but to keep the build clean Arjan boosted the left side with a BMW K100 front brake disc that allows him to leave the right side free. The rear end while lowered still keeps her booty in the air but the mono-shock setup is drastically improved with a fully adjustable Hagon shock that allows Arjan to set the bike up for his own riding preferences. That rear end is now considerably more appealing than the factory look with the slim waisted seat allowing the fat Avon Safety Mileage 4.00 rear tire to do its thing on the powder coated factory wheel. With the simplified front end getting more black powder on the forks and wheel with a Mitas 3.25 front tire. Such a build doesn’t need to wear too many accessories, beauty and bark turn the heads, with just enough in the way of the legals to keep the boys in blue at bay. The rear of the new subframe supports an LED tail light and indicators while the front end utilities Motogadget flashers. The ignition has been relocated and tucked away to the back with the ever popular Acewell digital speedo the only gauge needed. With that there was a sigh of relief and satisfaction around the garage as Arjan had finished another beautiful build to his clients delight. But as The Renegade turns heads on the streets of Amsterdam the main man at IWC Motorcycles is already thinking about his next build and hoping the quality of his work has the owner of a new R nineT or Ducati Scrambler walking through the door and asking for the full service!