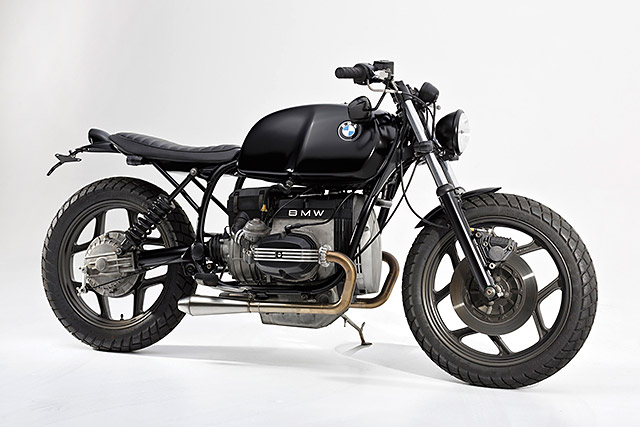 Perception is a funny thing. It can be the difference between a positive or negative outcome, between liking or not liking something or someone and often the cause of missed opportunities. To change perception usually takes a change of mindset or to be shown there may be more to something than meets the eye. Until recent years, BMW R-series bikes from the 1980s could have been considered in a similar light. A bike for old guys into function more than form. Solid, dependable, but neither exciting nor innovative. Or at least that was a guy called Bruce’s perception of them when he visited Brisbane’s Ellaspede Customs as a customer. But that was a view which was soon to change – especially after eyeing a certain R-series on a little site called Pipeburn. Bruce is a good mate of Ellaspede and visits regularly. Whilst hanging around the workshop he gained an understanding and appreciation of the build process and formulated a plan to build his own custom bike. As mentioned, his view of the R series changed after seeing their stripped back simplicity, along with the exposed airhead boxer twin and figured his 1979 BMW E21 coupe needed a German companion in the garage… so the search began for a suitable donor. Not long after, he rolled in on a stock ’87 R65 mono. He could have kept searching for an R80, 90 or 100 but the smaller frame of the 65 lent itself more so to Bruce’s vision, so work began. Bruce had a clear idea of what it would look like and instructed us to “make the frame as minimalist and smooth as possible”. Like most standard bikes this meant a lot of cutting and grinding to rid it of the items that were excess to requirements. Bruce supplied a Nitrohead seat, headlight, indicators and mufflers. Ellaspede made the frame suit the seat and suitably mounted the other items. The captured forks limited the ability to lower the front so they custom fabricated a top clamp to allow this, giving a tougher stance. Part of the vision included an under-seat battery/electrics tray, now occupied by a new lithium-ion unit, and many other electrical revisions. Along with a new custom rear guard, Ellaspede ninja star plate mount and modified sparto-style tail light, other small adjustments were made to the frame before other friends of Bruce’s that own a panel shop applied all the paint work. “They are amazing guys who were able to execute exactly the vision I had. I particularly love the wheels. I didn’t want to build a black on black bike. I wanted a really subtle bronze/gold/flat finish and left it with them… and they nailed it”. The assembly stage saw help from yet more of Bruce’s mates as they wrestled the boxer twin and freshly rebuilt gearbox back into place. Bruce’s vision took shape with each piece secured and part of that vision was the clean, tough look up front achieved by using one inch bars, Harley switch blocks and controls custom-wired through the bars to an Ellaspede aircraft-grade loom. Pirelli Scorpion tyres are the tarmac interface, which also helped the tough appeal. A 130 tyre may find its way onto the rear in the future. Pipe work is custom Ellaspede with the aforementioned short reverse cone mufflers giving a surprisingly deep, metallic note. There are plans to replace the Bings and airbox with Mikuni carbs and pod style filters but in the meantime, Bruce has a very cool ride and while isn’t a patch on many of Bruce’s former bikes speed-wise, it has put the world’s biggest smile on his face. The story of Bruce’s build is one of friendship. It happened through the work of many of Bruce’s mates coming together to achieve something of value and satisfaction. Whatever your view of BMW’s, custom bikes or the result rendered here, we’re pretty sure that this could only be perceived as a damn good thing.