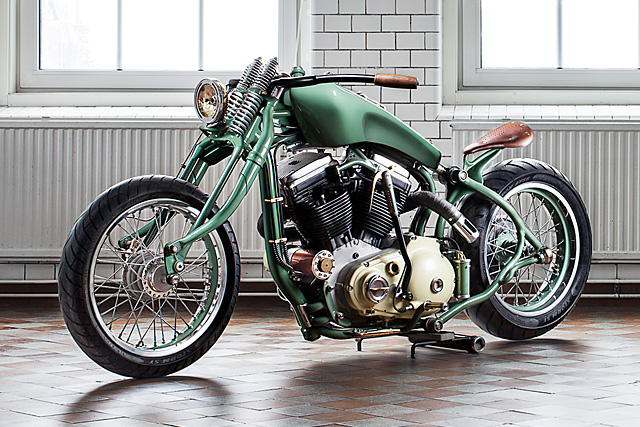 Ever had one of those dreams where you feel like you really need to do something, but somehow you never manage to? Maybe it’s a place you have to be or a task you have to complete.  Whatever the case, the harder you try in the dream the more unlikely you’ll be to make any progress. And in the end you’ll wake up with an incredible sense of frustration. Got the idea? Well, now you know how we feel about this bike. It’s one we first laid eyes on in 2012 and we’ve literally spent three years trying to get our hands on it – and now it’s here. Call it lucid dreaming. Call it luck. Hell, call it divine intervention. Presenting a bike that took a biblical one thousand days to get here. It’s Adam Nestor’s ‘Sporganic’ Sportster Harley. Adam first came to our attention after his ‘Madame Guzzi’ boardtracker graced our pages in 2010. Sporganic was built in 2012 and although we only got glimpses of the finished product, we liked what we saw. But then, due to his dislike of the peanut gallery that is anonymous social media comments (join the club) and a ton of interest from Sweden’s MCM bike magazine, he elected to keep things strictly offline. Fast forward to this month and after three years of subtle (and not-so-subtle) persuasion, he finally came around. Clearly, there is a god. “The initial idea was to build a woodie-inspired bike, so it was named the ‘Project Woodie Sportster,’ says Adam from his shop while enjoying the early Swedish summer. “I started off by acquiring an ‘88 Sporster 1200cc engine from my neighbor who runs a company called Sportster Specialist here in Rävlanda.” Adam’s vision was to build a bike with organic, rounded shapes and rear shock absorber that would sit between some old-school split tanks.

“So, I started to build the front. I’d been toying with the idea of a springer setup, but I wasn’t really sure how I was going to pull it of. Would I make it from scratch, source an old unit or buy one new? Then I found myself surfing the net. I found the ideal fork design from a photo of a ‘40s hillclimbing bike. It was perfect. And then a bit more of a search on Germany’s Wwag.com turned up gold.”

Adam’s next job was with the cylinders. “I though the engine cases looked too new, so I sourced a set from a 2004 sportster that I then redesigned to get a rounder shape. Basically, there’s four rows of fins that have been removed to get the look I was after.” The finishing touches here included an S&S carb, complete with Adam’s own jets (!) and choke controls.

The front hub was then fabbed up from scratch and the rear hoop is essentially a Triumph unit that Adam broadened to get it just right. “The saddle was a different challenge altogether. I wanted it to look like an old bicycle seat with a underside that allowed you to see the springs and frame. Once I had managed that, I made myself the leather cover and the aluminium supporting plate.”

Then came a raft of smaller bespoke parts, including the bars, foot rests, front hub, headlight and tail light and even the paint. He also finished off the pants-wittingly sweet tanks, with the right one flagged for fuel and the left for oil and electricals. As a final touch, Adam revisited his original ‘woodie’ idea by asking his dad, a carpenter by trade, to create a set of wooden grips. The final look with the antique green, cream, leather, wood and brass touches is clearly masterful and utterly magic.

“The bike was completed in January, 2013. At the end of 2013, I was nominated for a ‘Bike of the Year” award. I was blown away when I actually won. I also took home ‘Best in Show’ at the 2013 Custom Motor Show in Jönköping.” As with many bikes of this quality, it’s since been sold to a private collector in Sweden – we can’t help but wonder if they need a test rider or two to air the collection out every now and then.

And in response to the peanut gallery, Adam was quick to point out that the bike was never intended to be a daily rider. “No, you can’t go on vacation through Europe on it and there’s nowhere to mount a GPS. That’s not why I built it. I built it because I wanted to create something completely original. Yes, the bike is perhaps more art than vehicle, but it’s also amazing to see in the flesh and I’m extremely happy with it how it turned out.”

So, one thousand days later and here you have it. We spent three years tying to get it on the site and now it’s a reality. We’d tell you that we could have spent our time doing something more productive, but we’d be lying. It’s been worth every second.