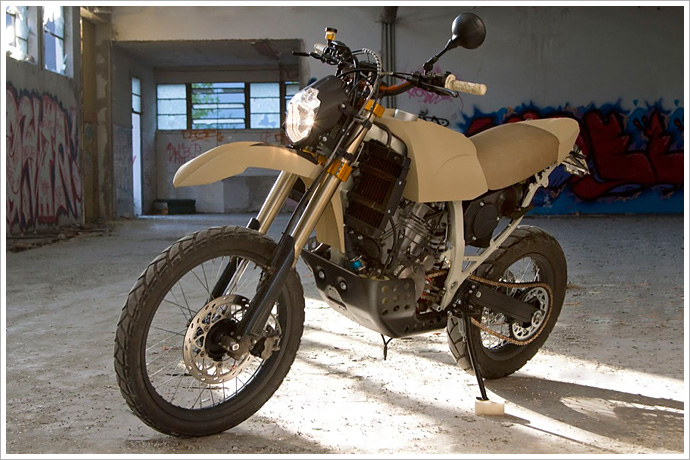 Some people thrive in adverse situations. They’re the ones that end up climbing mountains, crossing deserts or diving to record depths. They could take the easy option, but somehow they always end up choosing something that is inherently more risky. Similarly, in the bike world customisers who like to minimise problems and get results in the shortest amount of time will often pick a Yamaha SR or CB Honda as a donor bike. They are a tried and true route to good outcome. But where’s the fun in that? Why not choose a bike that would really pose a challenge? Our latest builder did. In fact, he chose the Everest of the custom bike world. A bike we’ve never featured on Pipeburn before. Meet Lorenzo ‘Tenzing’ Rapparini and his ‘Whiskey Throttle’ Honda. “This bike was dreamed up with the intention of creating a very light scrambler but more importantly, to make a unique bike through the choice of a really unusual base. In fact, a lot of customisers start with old XLR 600s, a Dominator 650 or a Bonneville but I’ve honestly never see any scrambler based on an Africa Twin 650 so I said to myself, this will be a good place to start.” “The first real work in the build was to create the fuel tank and a tail that would look modern but without loosing that vintage look that I like so much. So I created a model with polystyrene and coated it with a clay paste to define the main design line. The fiberglass was based directly off of that. For the rest of the bike, the frame was smoothed, and painted with primer. The front light came from a MT03 and the fender was from a KTM 450.” “Another big a job was the suspension. The front forks are Marzocchi’s that were fitted with a CNC-made plate. For the rear I used a KTM LC4 640 unit, but I’ve remade all the pro-link parts because the mono was longer than the original by about 4 cm. Other handmade mods include a trimmed seat, Trailtech instruments, a carbon dash with LED lights, headlight supports and the fuel cap. When I started work the bike’s weight was about 230kg. Now it’s only 180kg dry.” “The bike’s name is ‘whiskey throttle’ from the slang term to describe when you give a bike too much throttle and the acceleration pulls you back and you add more throttle… and you go out of control. Similarly, I’ve created a foolish, light and out-of-control bike from a fat, slow and cow of a bike. I think the name really suits it.”