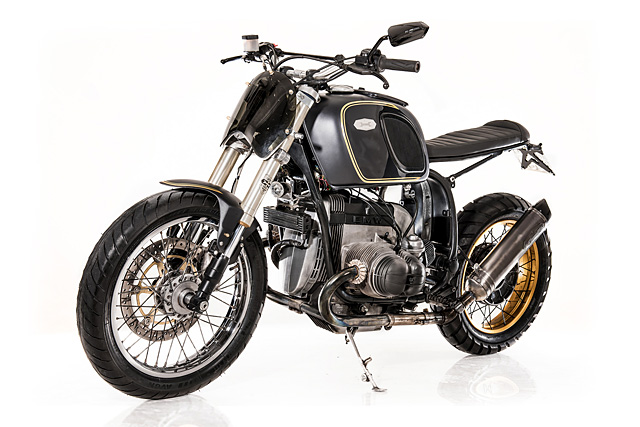 Rome-based custom house Emporio Elaborazioni Meccaniche have taken a 1989 BMW R100RT land ship and have stripped, welded and ground their way towards a light streetfighter-cum-tracker that is destined to carve up Roman traffic. Under instruction from a customer to build a bike that blended tradition and futurism this small Italian company say they received aesthetic inspiration from Tron and Daft Punk to realize their customer’s wishes – and I certainly think he was able to ‘Get Lucky’ with this mean looking motorcycle. It’s a little simplistic to look at a successfully denuded bike like this R100RT and miss the amount of hard work required to get it looking so clean. EEM started by swapping out the standard tank for an earlier R75 model and the rear subframe was removed and replaced with a bespoke unit that was, unusually for bikes featured on Pipeburn, taller and more aggressively angled, with the idea of pitching the rider higher and more forward as well as offering better visual balance to the large fuel tank. Suspension-wise, the front forks were replaced by a USD pair from a Yamaha and a Takasago rim was removed from a Suzuki motocross bike and made to fit and some lathe work was required to fabricate an adapter to mate the 320mm disc to the hub. The rear too, got a bit of attention when the stock rim was swapped out for a wider BMW GS hoop and no small amount of work was needed to battle the problems this raised – the lathe came in handy again and spokes had to be swapped out so it could clear the swingarm. A fresh Öhlins shock keeps the rear end firmly planted on the ground.

On the engine front this RT remains stock, except for the 2 into 1 exhaust system which was made in house and mounted to an Arrow slip-on that has cheekily been rebranded with the EEM logo. The hardest part EEM found was trying to sort a small, discrete battery powerful enough to get those big Bavarian pistons moving. After some trial and error they managed to find a small lithium battery that they could hide in an alloy box they mounted just next to the starter motor. My personal favourite touch is the number board that acts as a shield for the headlight. Mounted behind a dark black polycarbonate shield the power of the LED lamp means it can still throw a decent beam of light, but is hidden neatly behind the plastic. I certainly think that it works a lot better than the usual ‘action-man-sized-headlight-fitted-in-the-middle-of-a-number board’ routine that most tracker builders end up running with. The guys at EEM are understandably proud of this work-around, dubbing the bike Lucifero – from the Latin ‘who brings the light’. Neat. Controls are standard for the BMW but are now mounted to a set of enduro bars on top of aluminium risers. And the footpegs? EEM thought that the bike lacked a little bit of the ‘reuse as much as possible’ philosophy of previous builds so they beefed up the stock peg using some old chain. A large, back-lit electronic speedo sits below the bars, keeping the lines at the top of the motorcycle clean. BMW customs are a staple of the custom bike scene these days and while many we see appearing around the world look a little samey, EEM have drawn upon some unusual stylistic inspiration from Daft Punk and Tron to build something that looks distinctly different and is certainly harder, better, faster and stronger than the stock R100RT. It looks to be a fair bit lighter than the standard bike, a lot more interesting and above all, I think it’d make a meal out of the chaotic Roman traffic. It’s got just the right splash of gold and a nice combination of flat grey and gloss black to tie it all together. I might just go look at the photos one more time.