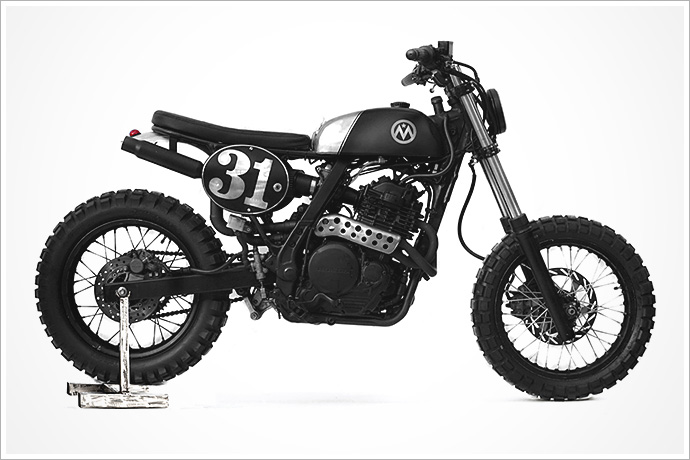 Of all the strange and wonderful donor bikes you could pick for a custom project, it’s hard to think of one that trumps the indefeasibly popular Honda Dominator. In orginal form, its look is a rather alarming mix of awkward plastic mouldings and 80s graphic styling – as if a Duran Duran album cover and a wind-up praying mantis had somehow managed to produce a freakish love child. Which makes the production of any cool-looking bike out of its freakish lines a particularly skilled accomplishment in our books. Cue the latest build from our favourite Northern Italians, the alarmingly Rock’n’Roll Marco and Phonz with their Honda Dominator named “Madunassa”. “We started with a Honda Dominator from ‘91 that was supplied by the customer, a former pilot. As soon as we saw the bike we got our hands in her hair (don’t you just love Italian?), and we realised it was a really nice challenge to try and come up with something beautiful from this particular model. We were inspired by the classic motocross bikes of the 70s, and from there we started our Dominator adventure.” “The bike has been completely gutted, starting from the rims that have been replaced with motard wheels, instead of the stock tires, we used Continental TKC 80s. The rear frame has been redone from scratch in order to get the line that we wanted, so we added a rear fender made of aluminum and a small light housing. The saddle is handmade in cowhide with our ‘classic’ stitching pattern.” “The exhaust has been revised with a new 2 into 1. The sideboards add a vintage touch and the number is not random, but is actually the owner’s age. The tank was found in a flea market; we’re not sure where it’s from. The bars have been replaced with renthal unit. And obviously the forks and rear shock were hardened and calibrated too.” “The muddy shot were taken last weekend when the bike was used for a 70km trail ride between Bobbio and the Passo del Penice. The owner has quite a heavy wrist!” Passo del Penice? Heavy wrist? Erm… “Madunassa is just an expression that the customer said as he saw the bike for the first time, so we decided to use it.” The boys didn’t offer up any more details on the phrase than that, but knowing that there was probably a little more to it, we hit up our resident Italiano esperto, Francesco. “It’s a dialect from the north,” he chuckled. “It means ‘little mother Mary’ and it’s used as an exclamation, like ‘oh my God!’ You know, looking at the bike in the photos, I kind of see what the customer was getting at.