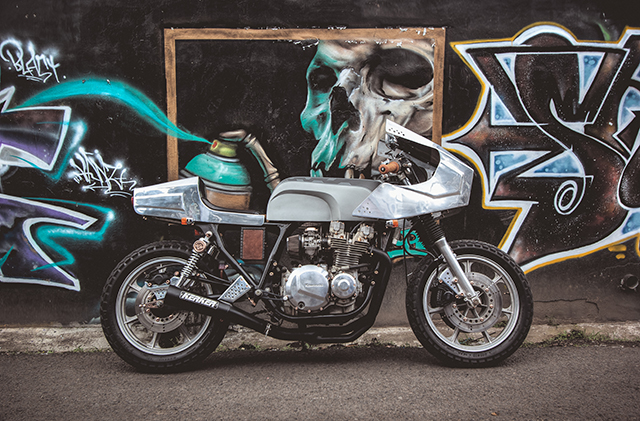 In most western civilisations, we take basic human rights for granted. Take, for instance, clean drinking water, political freedoms and the ability to ride high powered motorcycles. This stands in stark contrast to our brothers and sisters in Indonesia, where any bike that was over 200cc was illegal to import or buy unless it was for military or police use. But why should they get all the fun? Well, today’s bike is a left over from the good ol’ days of South East Asian law enforcement and it’s addressing this imbalance, big time. It’s an Indonesian Kawasaki KZ1000P Police Edition named ‘Kwakazilla’ and thanks to it, criminal getaways in Indonesia were about as successful as a North Korean metal band. The concept was to build a cafe racer with a 4-cylinders Japanese built engine that still runs smooth and has legal papers. This bike is one of the big Kwaka’s that were imported and used in 1992 for escorting Presidents and Prime Ministers limousines when there was a large political conference that was held in Jakarta. After the event ended a lot of these bikes were sold and auctioned to civilians. “We wanted a classic racer look, but we think that we have seen enough standard café racers lately and tried to come up with a slighty different approach” says Gifny from Hajarbroxx. “Instead of going with the 60s or 70s styled racer, we were going with early 80s styling for this bike. We think a lot of 80s bikes are underrated in terms of aesthetics, so we tried to come up with something fresh by blending the 60s and 70s simplicity with the 80s hard-edges and quirkiness.” The engine is police stock, with K&N filters for the look and to milk the horsepower. They also used Dynatek coil wires and a NOS 4-into-1 Kerker exhaust to get the “80s-Eddie-Lawson-ish” look and some extra bite. Wheels are also stock, but the brakes and calipers are classic F08 and P108 Brembos, chosen for their retro look and reliability. Dunlop 410/18 for front tire and 425/18 for rear. They also chose to use Tommaselli clip-ons and Tarozzi rearsets. The tail and fairing were handmade by Hajarbroxx using aluminium. They were going to use aluminium for the tank as well but ended up using galvanised steel sheets, so they could shape it exactly the way they wanted to. The seat was crafted by the infamous leathersmith Xian Leather in New York – who apparently doesn’t do motorcycle related work anymore. In true Indonesian style, the guys at Hajarbroxx have created a truly unique bike with some lovely details and solid workmanship. We particularly love the 80s styled fairing, custom aluminium control panel and seat. It might not be the prettiest café racer on the planet, but it definitely stands out from the crowd.

You check out some of the other Hajarbroxx projects on their Facebook page.