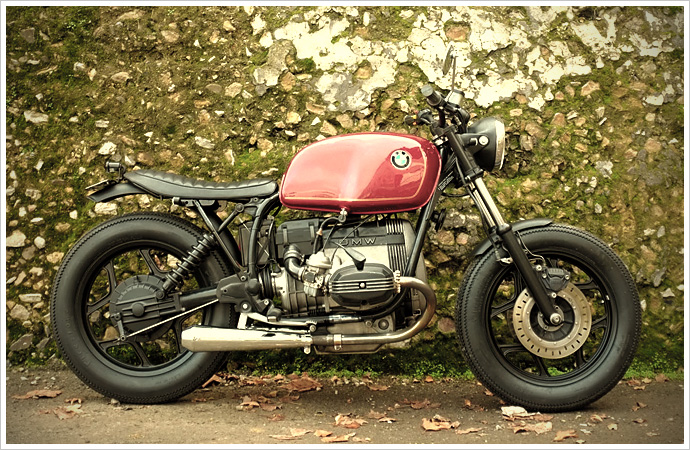 Tasmania. Home of the Tasmanian Devil, some damn spectacular scenery, and the butt of some pretty unsubtle jokes from the rest of Australia. Americans have quips about “Southerners,” the English make the funnies about the ”Northerners,” and down here we mostly make jokes about Tasmanians. There’s no need to go into detail – you probably get the jist already. But here’s a bike that proves beyond any shadow of a doubt just what these islanders can do. See, they’ve taken a machine that was just about the best the mighty Deutschland could muster and then pushed it a whole lot further than most of us could ever manage. And when I say “they” I really mean the rather talented Nicholas Damen and his rather amazing Bee Emm brat. “My name’s Nicholas Damen. I’m 29 and I live in Hobart, Tasmania. I’m an Electrician who likes to make surf films in my spare time. When faced with the decision from your old man as to whether you want $3000 cash for your inheritance or his BMW R80, what do you do? Take the BMW and customize it, of course.

My dad Alex has had bikes all his life and bought the BMW around 10 years ago. He had it set up mainly for touring, complete with panniers, crash bars, fairing etc. I’d always liked the big awkward looking cylinder heads on beemers and had one day planned on getting one. I started out wanting to build a café racer but after researching parts and spares I soon realised the BMW café racer had been done many times over and done so well. So I decided to try and do something a little different, I guess I’ve ended up with a street tracker brat.” “My first bike was a 1982 Suzuki RM80, I bought it for $400 dollars when I was 13 and Dad and myself stripped it down and rebuilt the thing right to the last bolt. I’m so grateful my Father spent this time teaching me valuable skills on repairing and restoring things.

Recently a group of my friends have also purchased bikes to customize and fix up, I guess were I ended up with the bike was a bit of their feedback and some features or styles on stand-out bikes I’d seen online or around the place. Having a bunch of mates around to help and critique my ideas and thoughts was a really valuable thing.” “The major changes to the bike at this stage have really only been aesthetic. I removed the centre stand, side covers panniers, and all the other stuff that makes a beemer comfortable. I cut the rear sub frame and shortened it and made it thinner to suit the nitro heads tuck and roll seat. Removed the central exhaust vase and mufflers and replaced them with Emgo universal reverse cone shorties. The original instrument cluster was removed and replaced with an Acewell 2853 universal speedo. The rims were sand blasted and powder coated matte black and I had a set of Firestone Deluxes fitted. The front fender is from a local Harley shop and I cut it down and fabricated a mounting bracket to suit. The rear fender and taillight are from Modern Motorcycles in Melbourne. The bars are a set of motocross bars.” “I went for a ride last week and as I walked back to my bike there were two guys checking out my air filter. I thought to myself, ‘oh gee – what do these old guys want?’ After a few words I soon discover one of them is from Germany. He tells me he likes my bike and asks a few questions, then his mate tells me Adrian, the German guy, actually designed the air box and air intake system for this model BMW and that he used to work for BMW in Germany as an engineer. After talking to Adrian for a bit I soon discover I’ve just met a walking BMW tuning encyclopaedia. I’m going to catch up with Adrian again and hopefully go for a ride and tune my bike a little better.”

[Want a bratstyle seat like this one? Check out our new store with free shipping worldwide on all seats]