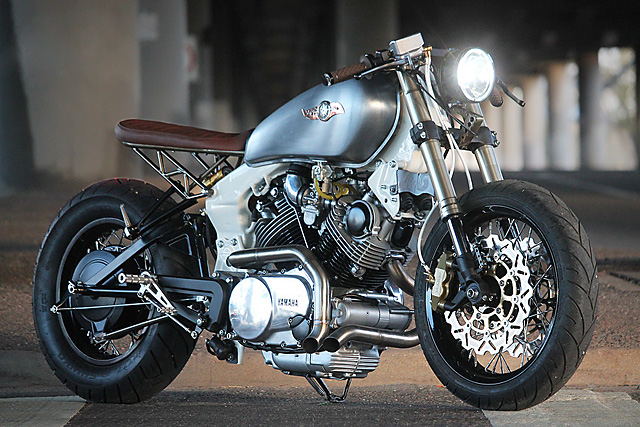 Ed Burke and “Hap” Ueno. There’s two names that I’m pretty sure mean absolutely nothing to you, despite them being responsible for creating this, the Yamaha Virago. It’s because in the world of automotive design, most never get to see the limelight. Besides, the original Yamaha Virago range was not exactly the Brough Superior of it’s time. But over the 40-odd years that the bike has been in existence, it’s never been more popular than it is right now. And it’s all thanks to the insight and talent of Ed, Yamaha America’s Manager of Motorcycle Product Planning and Yamaha Japan Engine Designer, Hap. The engine-as-stressed-member design, the box frame as airbox, the single rear shock and the shaft drive – it’s all theirs. And this? This is what their vision, and that of Colorado’s 485 Designs owner Nick, has created. Meet an XV920 that ups the bar for Virago customisers everywhere. Nick is 20 years old and he operates his shop out of Denver, Colorado. Now we’re not sure what you were doing when you were 20, but speaking personally I wasn’t doing much more than playing video games and playing with myself. Clearly I had a thing for joysticks. But not Nick. “I build bikes. Everything on the bikes is done by me in-house. Paint, powder coating, welding, fabrication, upholstery – you name it, I do it. The bike you see here is my most recently completed client build. And it’s definitely the best bike we have ever done.” Nick’s first task was a ground-up motor rebuild. “The heads were torn down, the cylinders were honed, new rings and gaskets were installed and everything was refinished to better than new.” The frame was then cleaned, modified and finished in a gloss cream white. While the ‘c-section’ design of the frame is clearly one of the bike’s key design innovation, we’ve never seen it highlighted like this before. Damn cool idea, Nick.

“The battery has it’s own custom-made box that’s located inside the frame, right under the tank.” Nick point out that the client requested a 2-up seat be included, so apparently it’s a little longer than the typical sub frame Nick would build. Personally we prefer our XVs with a bit of length out back, as it seems to give the bike a better visual balance. While Nick was in the general outback area, he took to the pegs and wheel. “The passenger rearsets are off an R6. The rear wheel was sourced from a later-model Virago, and it has a 160 tire fitted to it.” The shiny, golden front end is from a 2007 GSX-R750. Then to match the rear wheel, Nick had to find the GSX-R spoked front, which makes it pop and sets it apart from many of the recent XV builds we’ve featured.

The gold rear shock, rotors, banjo bolts and callipers add some premium highlights to what is a nicely restrained colour scheme while the white brake lines sit masterfully alongside the frame. The tank is raw steel, brushed and coated in a ceramic finish so it doesn’t rust. The custom copper badges were done to finish off the tank with a little more bling. “To modernize the bike a little, we then added some Motogadget parts. The M-lock keyless entry is located under the tank, while the Motoscope top clamp is from Cognito Moto and has a lot of cool features on it. The bar end blinkers are another cool Motogadget part, while the rear shock is off an MV Agusta and required a custom mount to fit.” The exhaust is TIG welded and has no baffling at all, so it’s about as subtle as Donald Trump at a meditation retreat. Lighting is all LED; the tail light has blinkers incorporated and the headlight has an LED bulb with a halo surround. “This bike was a customer-commissioned build,” says Nick, “so they had some of their own ideas to start with. But based on what he was looking for, I had kind of a retro bike pictured in my mind. So inspired by some really classic old bikes, I did the spoked wheels, the bare metal features and overall earth tones. I really wanted this bike to be a departure from the other Viragos I’d done, so I was always focused pushing this one in a different direction.”

Nick notes that there was one big challenge when building this bike. The customer really liked his technology, so incorporating these digital desires into the build without detracting from the classic looks was a big task. Using the Motogadget components and the Cognito triple clamp allowed Nick to build in the keyless ignition and integrated display without it being obvious when you first look at the bike. “My favourite part of the finished bike is hard to narrow down to one thing, but the spoked wheels would have to be near the top of the list. You don’t see them a lot on Viragos, especially on ones with a swapped front end. Other than that, I did a lot with the bare metal on this bike which I think is cool as well; the ceramic tank coating and custom badging that you’ll never see anywhere else. On other components, like the sub-frame and the headlight mount, I baked the steel to get a bronze color to match the stainless pipes.”

Now, we’re not sure if Ed and Hap are alive today, but we’re pretty sure that if they were, they’d be planning a brand new model. One that looks strangely like Nick’s work. It’s OK – we’ll let them put silencers on it if those pesky bureaucrats really insist. Just as long as they are quick release.