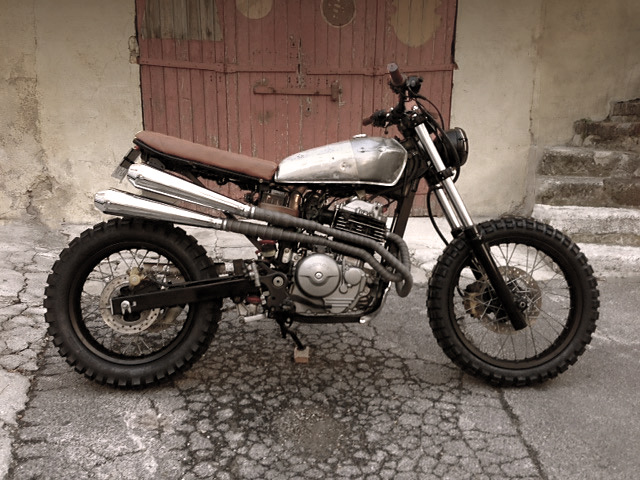 If you believe all the TV shows you see, lawyers are an overworked bunch who seem to spend all their waking hours either in court breaking down lying witnesses, helping street kids beat the odds of a system hopelessly against them, and sleeping with each other after hours. But here’s an exception to the rule. Meet French Lawyer Julien Perier the result of his total lack of after-hour office sexual antics, this rather amazing little Honda 650 SLR. “I built it in my garage during my spare time after my job as a lawyer in the south of France,” says Julien. “I hope it will please you and your readers as much as it does me. I have ridden motorcycles since I was 8. I wanted to make one by my own; a custom motorbike but which can be ridden daily. So I created it in my head and made it come true by my own hands. It’s a 1997 Honda 650 SLR. It’s second-hand, which I bought at a very low price.” “My first decision was to give her an older look with a scrambler-style exhaust. Also, I really wanted a old Honda tank with scratches from its previous life on there, too. And of course, I shortened the rear subframe and made a rear loop. I cut the original seat and gave it to the saddler to have a new cover made. I kept the original wheels (17″ rear and 19″ front) and had them painted satin black with Metzeler TKC 80s to finish them off. I also cut the original pegs and had them painted, too.” “Then I relocated the wiring harness under the seat and made a battery mount above the rear shock. A brown belt helps to keep the battery in place. I added new grid headlight and a little red LED tail light. There’s no tacho for the moment, but there is ultra low black Renthal handlebars with brown Ariete grips.” “There’s also K&N filters and a new jet kit for a better breathing engine. Apart from that, all it really got itself was new custom paint. The new exhaust is made with OEM headers that have been slightly modified, with two new middle pipe adapters, wrapping and two chrome megaphones.”