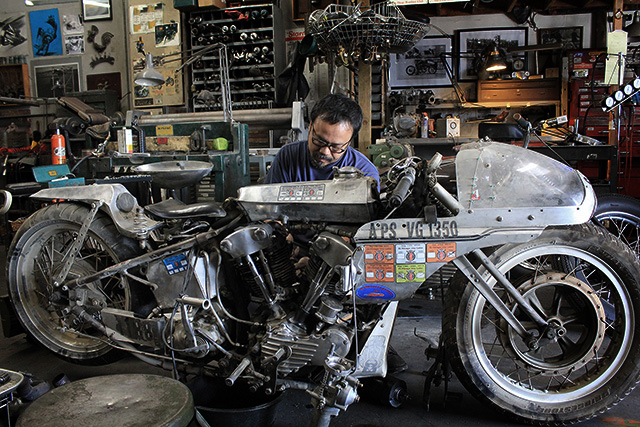 We recently travelled 7,530 miles from Sydney to California to race in the Hell on Wheels MC Rally. It’s a long way to go for a day of dirt bike racing, so we arranged to meet a few of our favourite bike builders along the way. Number one on our list was Mr Shinya Kimura. For motorcycle aficionados, he probably doesn’t need an introduction but for those who haven’t heard of him, he started Zero Engineering back in Tokyo in the early 90’s. He then left Zero and moved out to California and started Chabott Engineering. Shinya has a truly unique style, building stripped back, bare metal, works of rolling art. Each bike he builds takes around 6 months, so usually only builds 2 bikes a year.

When we arrived at Chabott Engineering in the foothills of Azusa, it was like walking into a motorcycle museum. Everywhere you looked, there were jaw dropping machines and motorcycle artifacts. Everything felt like it just belonged, as though some thought had gone into its placement. Like pages torn out of a 1975 Cycle World magazine, sitting next to a vintage trophy and a well used set of old school wrenches. We were greeted by Ayu – Shinya’s smiling wife – who walked us through to meet the man himself. She explained he was working on his Knucklehead, getting it ready to race for a land speed record at El Mirage on the weekend. We nodded and kept on drooling as we continued to look around in awe at all the amazing bikes and collectables.

The next hour flew by as we just walked around his shop taking photos – like big kids in a candy store. If this wasn’t motorcycle heaven, it was at least God’s garage. It’s probably no surprise to tell you that Shinya is a really humble guy. You won’t hear him talking about himself, or the bikes he has built for guys like Brad Pitt. Actually, you won’t hear him talk much at all. So we sat back and just watched him in his element as he worked away. He had blown the casing on his 1946 Knucklehead he calls ‘Spike’, and was welding the broken pieces together for his big race. We mentioned to Shinya that we were on our way to Hell on Wheels MC but the bikes we had been promised were still in a container coming back from Hell on Wheels Japan. It was a major set back to travel all this way and now faced the likelihood of not being able to ride in the rally. Looking around his garage I joked that “maybe we should borrow one of his bikes…” I thought he would laugh at the absurd remark. But after thinking about it for a bit, he turned to me and said: “I have a bike you could borrow.”

My eyes lit up, before I did another quick scan around his workshop. All I could see were hand built machines that he spends months building and probably sells for $100,000 upwards. “Not in here” he says. Almost reading my mind, like the zen master he is. “In another garage”. So we walked a few garages down. He lifts the large doors to reveal a sea of bikes, in all different conditions, shapes and sizes. My eyes were now darting around at all these amazing bikes wondering which one he was going to lend us. Having just been offered a bike by Shinya to race, we would have been stoked with a Honda Monkey. Then Shinya points to a pretty little red Honda SL100 at the back. “This one” he says. “It goes well”. We had a bike and she was a beauty. So we went to work prepping it in Shinya’s workshop of all places. We pulled off the stock pipe and Shinya found a straight through pipe that looked and sounded more our style. We then removed the lights and everything else that might be broken on an mx track. The day had gone fast and it was time to hit the road. So we loaded our new prized possession in our $19.95 a day U-Haul van and headed out to Milestone MX Park. Promising Shinya we would return his much loved SL in a few days – and hopefully in one piece!

We did return a few days later with a Hell on Wheels trophy in hand. Andy Baker received a 2nd place in the 100cc and under class, channeling the spirit of Shinya in the final and pushing the SL to new limits. Shinya didn’t do as well as he had hoped at El Mirage. He blew a gasket in his first race attempting a land speed record, and that ended his day. Luckily we caught up with him just before he left and got a couple of photographs of him and his El Camino with his Knucklehead in the back. Unfortunately, his van had broken down that morning, so it wasn’t the best day for him. But that didn’t stop him smiling. It was an amazing experience meeting Shinya. To watch this master at work. And then to actually be able to work along side him on a bike – albeit it a Honda SL100. It was one of those days that even now seems like a dream. A day that years from now will still leave us grinning like fools when ever we think about it. This day alone was worth travelling 7000 miles for.