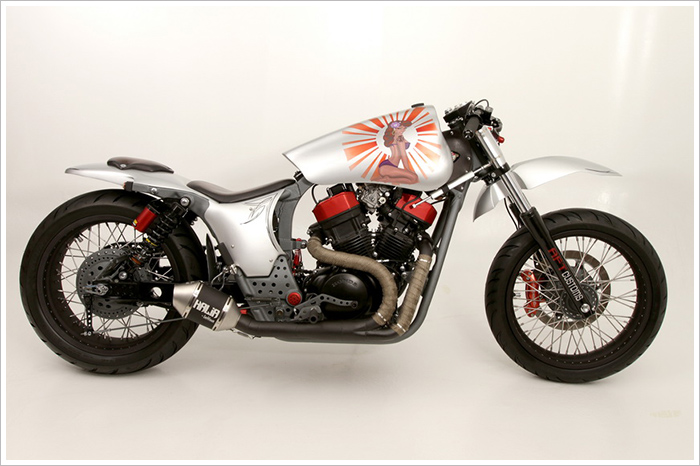 Remembrance. It means different things to different people. Some people like to plant trees to remember someone passing. Some people hold massive parties to remember the good times. My friend has his dad’s ashes in his shed – because that was where he was his happiest. So when Nalani from AFT Customs dad past away just before this build kicked off, they decided to build the bike in honour of him. And what a symbol of commemoration it is… Halia (a Hawaiian term for ‘in remembrance’) has been nearly fully handcrafted from aluminium, it’s bodywork showing it’s versatility as both a saltlake racer as well as a cruiser. AFT was looking for utility in this build, and they have achieved it, as this bike looks just as at home at Bonneville, as it is carving up the curves in Nalani’s native Sierra Nevada. This motard/bobber hybrid may not be to everyone’s taste, but it sure gets the job done. Speaking of hybrids, AFT is truly unique, it’s not only a well renowned custom shop but also a modelling agency. The models aren’t just pretty faces either, these beauties actually get their hands greasy contributing to the bike builds – and yes, a few finger nails may have been lost in the process. Halia itself has been built by 60% girlpower alone, and if you check out AFT’s facebook page, there’s a gallery of all the girls hard at it. Just like the models who helped build it, this bike isn’t just about the looks. Powered by a Honda VT750 engine, the powerplant has been treated to one of AFT’s own performance packages. This consists of new pistons, port and polished heads, the power is then relayed along by a Barnett clutch. K & N filters breathe in, an AFT designed Leo Vince muffler breathes out, Dynatek coils bring the ignition power. All this adds up to a top speed of 104.75mph at Bonneville, albeit hindered by the stock 5000rpm rev limit. With a Dynatek 3k unit allowing for a 8000rpm rev limit, and new gearing, the AFT crew is hoping to see 120mph on the saltpan next year. It’s not all hard performance figures either, Halia has also taken out the Performance Custom Class at the 2012 AMD World Championships for custom bike building, the low swooping lines catching the judges eyes. Form and function work together well on this bike, from the radiator mounted under the seat, to the standout fuel tank paintjob, to the Beringer hand controls. Spoked wheels make for a unique sort of old school look, and the pillion cushion shows that this bike isn’t all about top speed. All in all, AFT has taken utility to a whole new level, coming up with an award winning bike, that is just as comfortable at top noise across a saltflat, as it is smashing through corners in the North American mountains, and you can still have someone sitting on the back whenever you want. We think Nalani’s dad would be very proud.