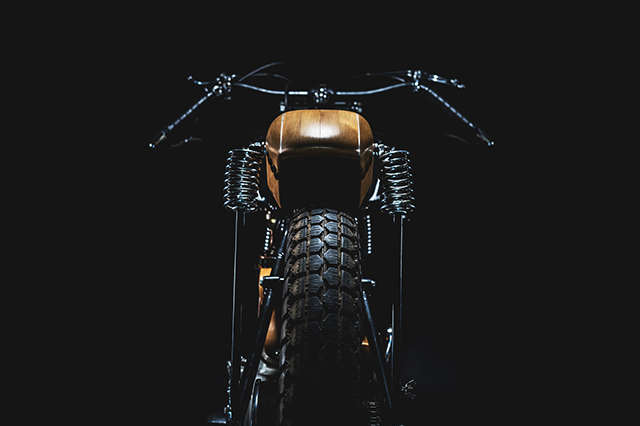 Where we choose to call home says a lot about us, hence the warehouse that Sébastien Valliergues calls his own speaks volumes about the man and his passion for wood. Known by the Instagram handle @georgewoodman64, Seb even looks slightly like a fine tree that you might see maturing on a Spanish hillside, maybe an olive tree, his skin has a certain wooden texture and tone to it, but his panache and skill for sculpting the material is anything but wooden. The warehouse is like nothing I have seen before; there is a central  courtyard which is home to a few old bikes sitting on wooden plinths of course, and on each side of this space Seb has built his house, inside this cavernous building. 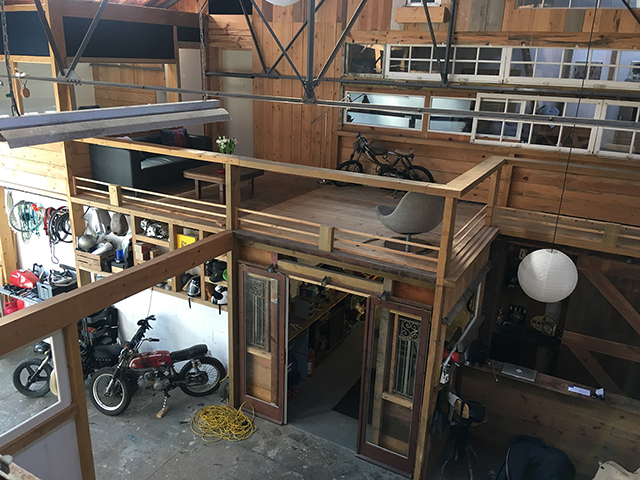 The place feels not totally dissimilar to the fake ghost towns in western films, tumbleweed mysteriously blowing down the street, but this is more than a simple façade, this is home even if it does have more than a hint of film-set vibe to it, maybe his ten years working in cinematography has made an impression on his subconscious. As you walk in, on the right hand side there is a two storey accommodation unit which stretches to the ceiling high above and on the left, the kitchen sits above the workshop, within which Seb feels most at home to create his current masterpiece. Everything is made from wood. Connecting the two buildings are a series of walkways and steps for the in-house cat who teeters perilously high, like a tightrope walker, above the unforgiving floor. To the rear there’s an office and more living quarters and yet more space for quirky old bikes.

The first time I came here was to deliver the 1976 Laverda 500 that was to be Seb’s next project following his triumphant submission for The Harrison Awards 2019. A brief interlude to explain the Awards for the uninitiated; the Awards are a scheme I dreamt up in 2018 when I recognised that a forlorn Ducati M900 sitting in a corner of my garage would be a dream donor for an up and coming custom builder. I didn’t know how to go about finding someone to work on it as I wanted to find someone new, someone the world hadn’t yet heard of, so, with the help of Gareth Roberts, friend and director of Oil In The Blood, I created a sort of talent contest for bike builders, with the aim being to boost the lucky winners to custom bike stardom.

In 2018 an M900 and a 748 went to builders in the US and another M900 went to a young blade in Rome, the end product “Wildcard” was released at MBE in Verona which, as a side note, was displayed at the Pipeburn stand. Having said all that Seb, being the winning contestant in the second year of the Awards, certainly isn’t looking for more commission work as he finds it so hard to separate himself from his work, I questioned his motivation to take the commission on and without wanting to flatter me, I think he likes my collection! It’s only the truly worthy that can count themselves lucky enough to be the custodian of a Woodman one off creation, I shall be one of the few, I probably feel more lucky than he.

Originally from Paris, Seb used to build exquisite and highly detailed handmade pieces of furniture, kitchens and libraries; sorting the wheat from the chaff by immediately bringing up his exorbitant cost, he whittled himself a nice niche in the high end market. Moving to surf spot, Guéthary, he started building Alaia surfboards, but it wasn’t long before his attention was turned to his 50cc Malaguti which needed what the French call a “relooking”, for whatever reason the little Italian bike never received its makeover but the seed had been sown. A born customiser, when he was just a young sapling, Sébastien personalised his trainers and bmx bikes, so a motorcycle was a natural progression for the man, despite not even having his license! 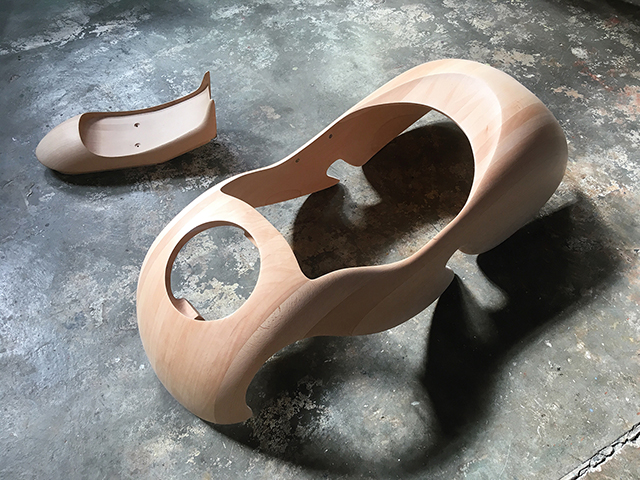 In his own words, seeing Swiss compadres Young Gun Speed Shop complete a stunning build  based on an old AJS gave Seb the push he needed to finally go and build his own bike. The result was nothing short of spectacular; “Smoking Black Fish” based on a pre war Belgian 350 thumper made by FN, it can now call The Haas Museum home, quite the accolade for a first build.

The workshop is devoid of your usual woodworking tools, yes there are countless clamps but really it’s more like an artist’s studio, with plenty of workspace and no mechanics tools, Seb prefers to think of himself as a craftsman than anything else and outsources any metal work to local friends. There’s a small booth which is used just for the dusty process of wood sculpting for which he uses a lethal looking device; a guardless angle grinder fitted with gnarly looking teeth, the sort of thing you might see in a James Bond interrogation scene, the object is then endlessly sanded to perfection. 3D shapes are created by gluing multiple layers in various shapes to create the desired shape, like a rather complicated jigsaw puzzle. Originally from Germany, the wood that Seb uses on all his builds is beech, a hard, durable wood which is normally left natural in colour and simply clear coated but, like a surfboard, can be covered with an epoxy resin to promote longevity and allow the owner to use the bike in the rain, although that would be a barely imaginable travesty! 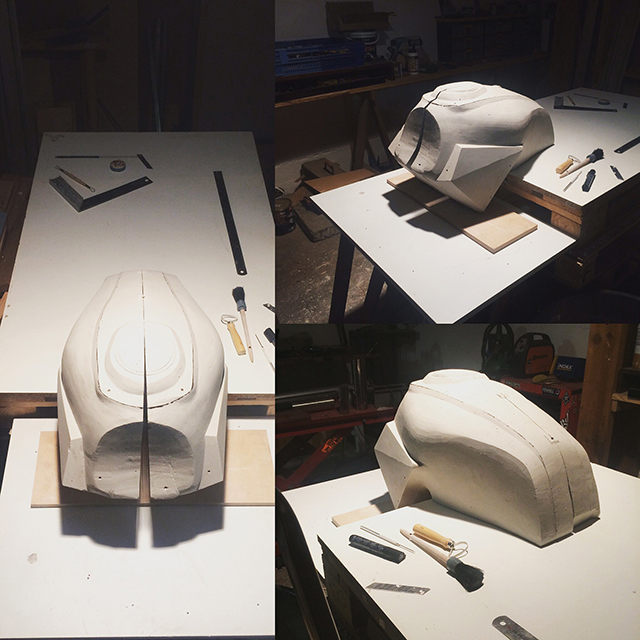 The Laverda is currently disassembled and Seb would like to keep the build details under wraps for the moment but he is happy to show the drawing that is blu-tacked to the wall next to the frame of the bike, which is the same image that won him this commission. So, after all that introduction, I can’t really tell you very much at all about this work in progress. The end result and part two of this article will be released in June at Wheels & Waves, if you’re there you’ll see me tentatively taking on Punks Peak on the completed Laverda. Until then, we can imagine the wood man, working in his workshop in Biarritz, sculpting a future icon. 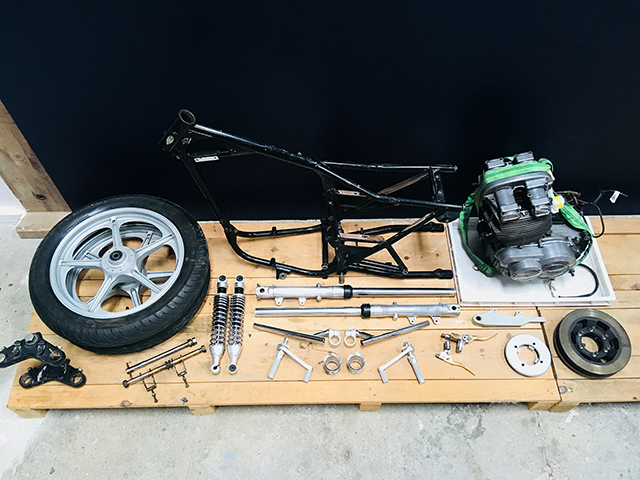 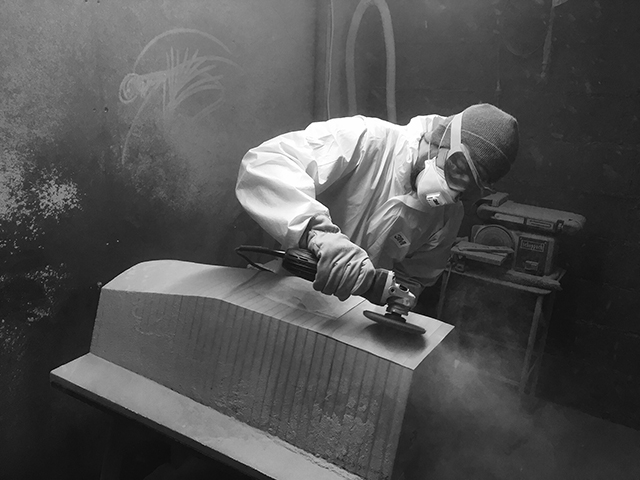 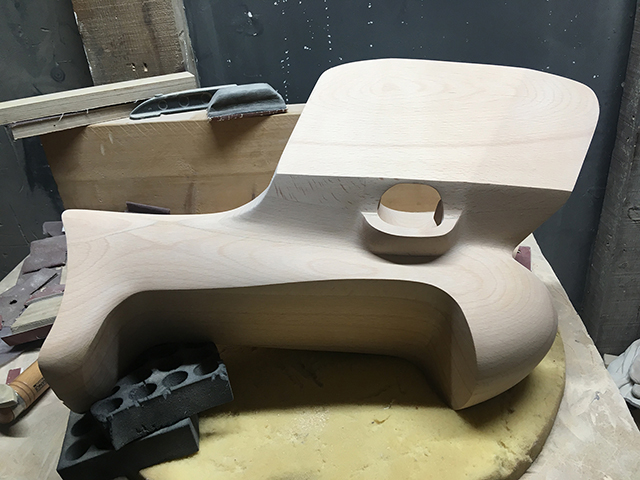 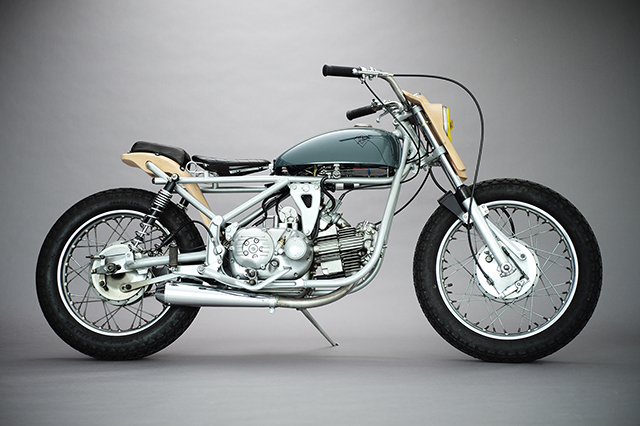 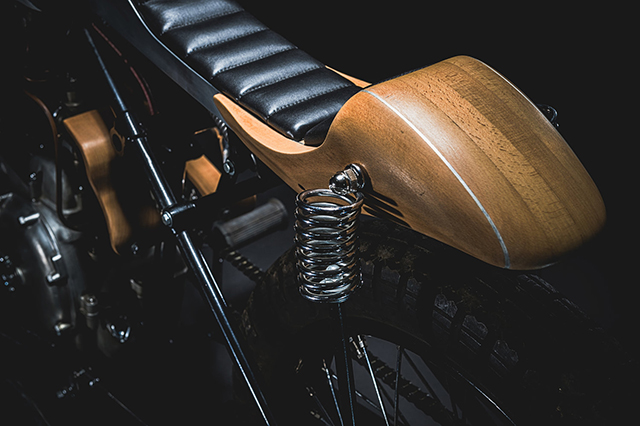 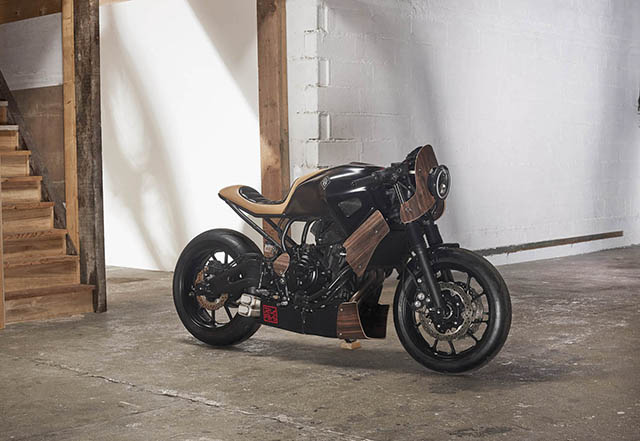