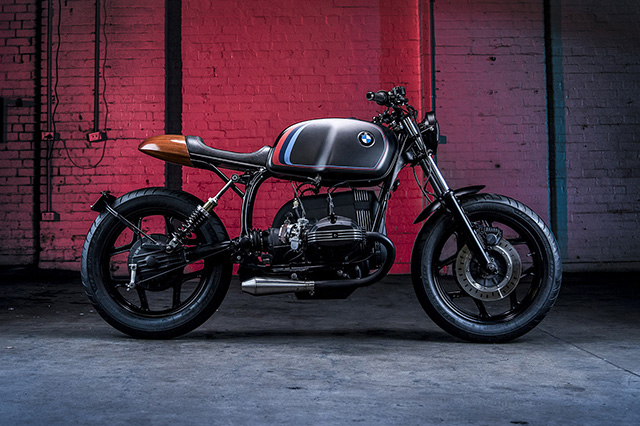 You know how the story goes… a guy’s father-in-law has an old bike in the shed. The guy wants to do it up, calls a mate and they hack at the seat, chop the frame and pop on some mirrors – bish bosh job done! Well, that’s not how this story goes. Stephen didn’t have much of a bike history but had always admired his father-in-law’s motorcycle laying dormant in the garage. The motorcycle in question was a completely stock 1983 BMW R80RT. Burgundy in colour with full fairings, panniers and the obligatory sheepskin seat cover. It was covered in dust and hadn’t been ridden in over 10 years, so Stephen plucked up the courage to ask his father-in-law if he could have the bike promising to “fix” it up for him. 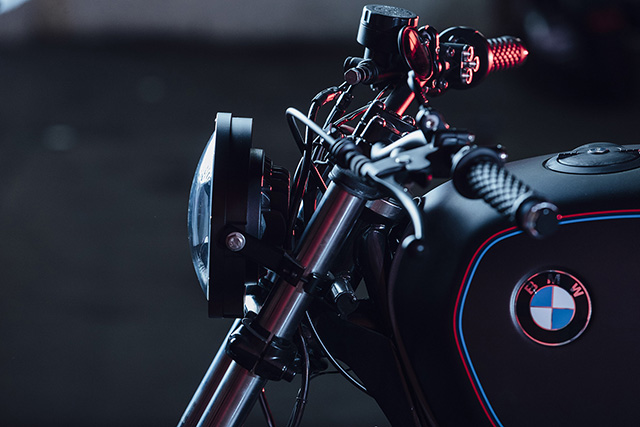 The father-in-law said yes, but wasn’t aware of the plan Stephen had in mind. He called his mate John the owner of Sol Invictus Motorcycle Co to discuss the build. Armed with references from various build shops like Munich’s Diamond Atelier, a shop renowned for building dark, urban, yet minimalistic and aggressive bikes, the Sol team knew they were in for a challenge. First came the teardown. The Sol team completely stripped the Beemer down to the frame finding the occasional rats nest amongst the chewed wires. Tearing a bike down gives a great insight to the way the engineers of the time solved engineering problems and cleverly designed solutions; and to say Beemers are over-engineered is no understatement. 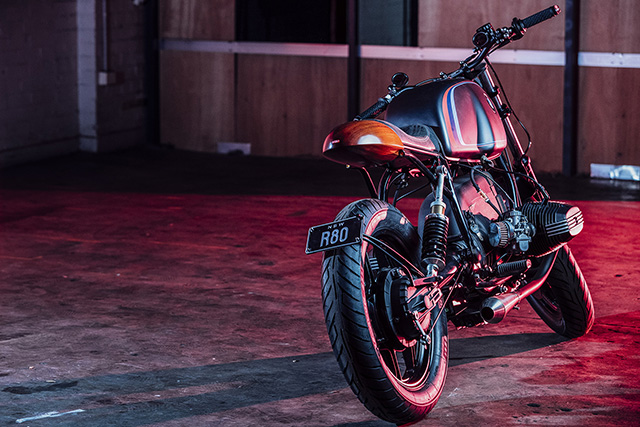 Having been stationary for over ten years the motor was the first issue to deal with –  it was in need of some serious TLC. All bearings and seals were replaced, new gaskets fitted and the engine was given a complete overhaul. Then it was off to the media blasters and resprayed black. New Mikuni round slide carbs were installed, K&N pod air filters helped it breathe and an Antigravity lithium battery was fitted and relocated. 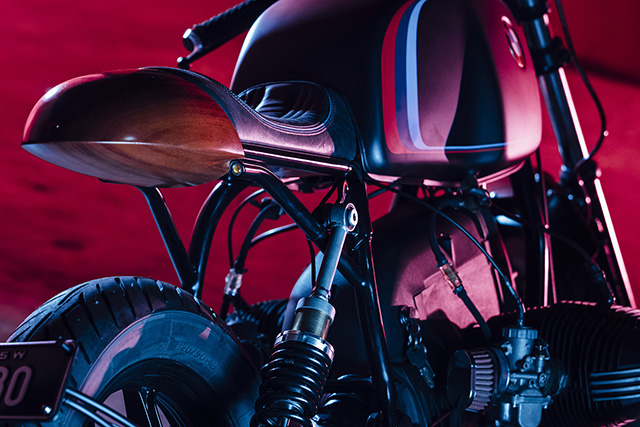 To achieve the desired stance the frame underwent some small tweaks, most notably were the tank mounts. We wanted to rotate the orientation of the tank making it angle down at the front and have a more aggressive rake. The rear subframe got the Jenny Craig weight-loss treatment with a custom fabricated tail section and integrated indicators inside the frame tube ends. The other big part of the bike’s overall design was the integration of the solid wood rear cowl. Crafted from laminated timber by Stephen’s brother who is a master wood craftsman. The tail light was recessed into the timber and hollows created where the indicators appear. 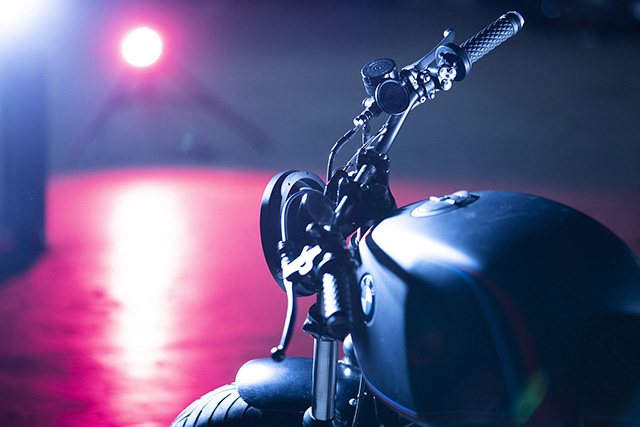 A new seat pan needed to be made to fit the new subframe and was upholstered in vintage black leather by Sol’s go-to man Dave at Badass Trim Co. The leather was complemented by the coloured stitching drawing from the tanks BMW M Sport tricolours. 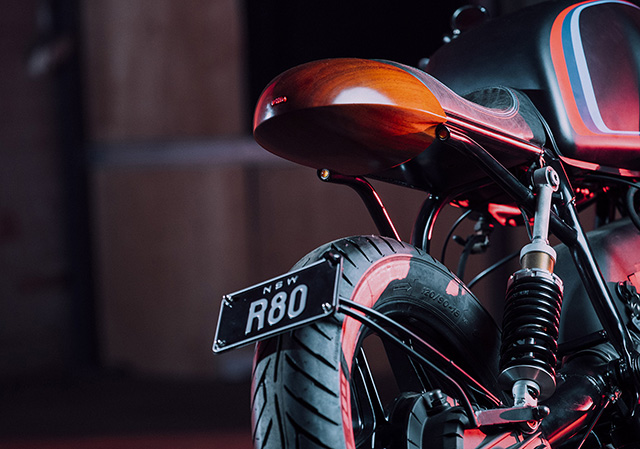 Up front the forks were rebuilt, the brake lines upgraded to stainless steel, the brake calipers overhauled and the wheel rims powder-coated black and wrapped in Avon Roadrider tires. The handlebars were swapped out for Renthal MX bars with Purpose Built switches wired internally and bar end indicators to cap them off. A Motogadget motoscope mini sits perfectly between the risers and a 7″ LED headlight lights the way. 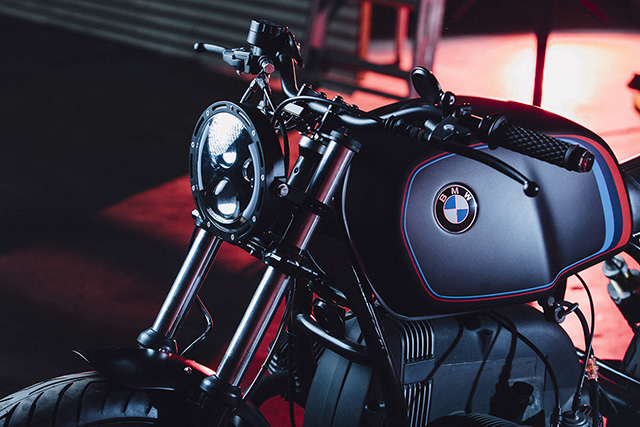 It was a great project to work on for the Sol team and it turned into a real family affair with Stephen, his brother and even the father-in-law being very involved in the whole process. The next step is for Stephen to get his full riding licence so he can take his beautiful customised airhead for a ride. 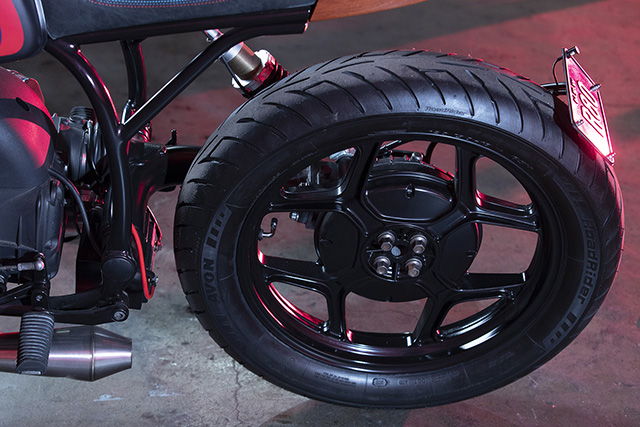 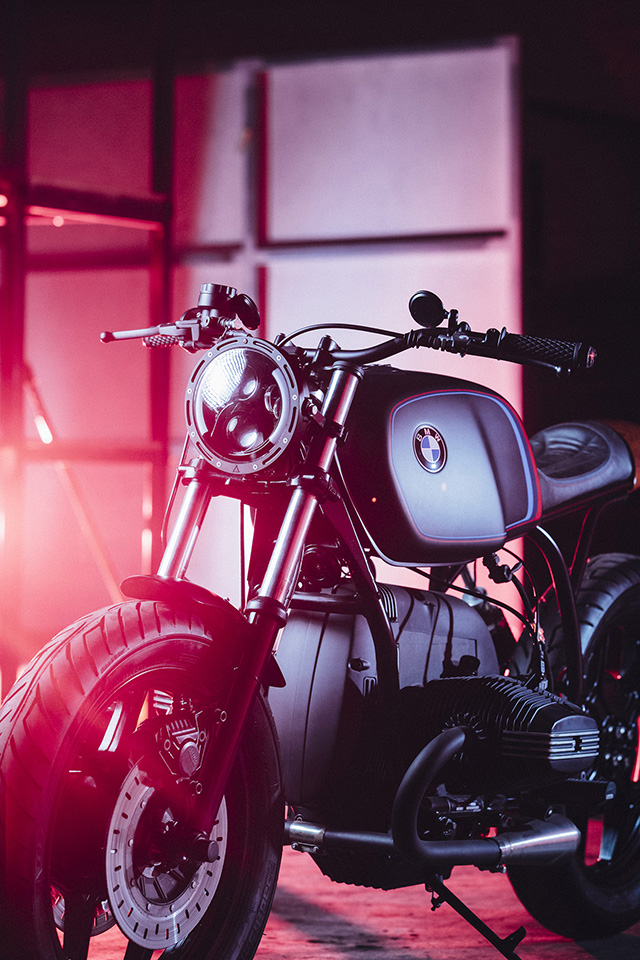