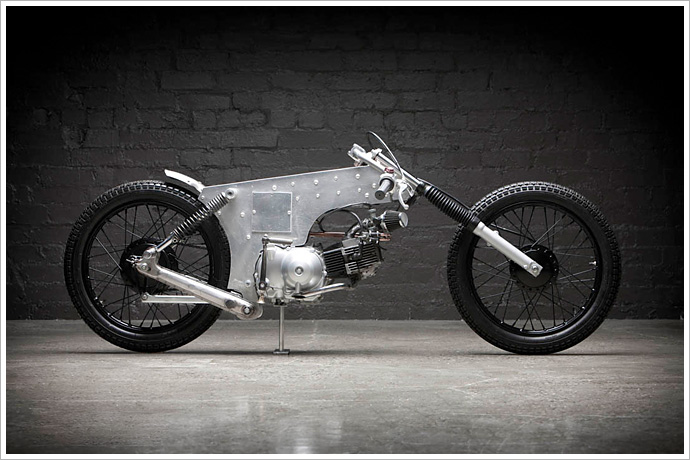 Pipeburn firsts? We’ve had a few in our time. A WWII Harley blown with Subaru supercharger. A twin pulsejet bobber. Even a murdered-out Chinese army bike. But never, NEVER, have we had anything like this. First and foremost, it has no seat. On any other day that would be enough to stop you in your tracks, until you realise that it has no tank, either. Or frame. Or instruments… hell, it barely has anything at all and looks like the bastard child of an unholy union between a drag bike and a giant’s Mecano kit. And we love it. Introducing Andy Copeland and his CT110 masterpiece, “Express Post”. “I bought my Honda CT110 (famous in Australia as the bike postmen ride) with the sole intention to obtain my motorbike license and then move onto bigger and better bikes. I had always been inspired by Shinya Kimura’s style. In particularly his Honda cub but had no intentions to sink my limited time into ‘just a postie bike’ in an attempt to achieve this style.” ”The bike sat forgotten and gathering dust until some close friends of mine created a now annual event called the Rusty Kustoms Biker Build Off. The competition is focused on homemade, budget, low capacity motorcycles. To be eligible for the event the builder must complete a course around the block so the bike was built with the intention to only ever complete 1 lap of the block. Provided it didn’t catastrophically fail, any additional rides would be a bonus.

Being my first ever bike everything was completely new to me. I had only ridden just enough days to pass my test and get my license. In terms of the actual build, I didn’t have any preconceived perceptions as to seating position or steering geometry so I was lucky to have very few design constraints to work around.” “Drawing on my architectural background I sketched and sketched, attempting to highlight and resolve as many issues as I could prior to starting the build.”

“Using my drawings as a reference, the bike was initially mocked up with the frame template being cut out of cereal boxes, and a spider web of ropes strategically hanging the cut up CT110 parts from the garage roof in their correct positions and angles.” “Countless cereal boxes later the rake, swing arm and engine position were decided and the cardboard frame templates were ready to cut out of wood. With the bike loosely clamped together, it was at this stage I was seriously questioning my dreamt up engineering capabilities as the bike creaked and wobbled when I wheeled it around (I was not game enough to even sit on it).” “With little time left I steamed forward, reassuring myself that aluminium was much sturdier than wood. I progressed, spending my nights in the garage slowing cutting and filing the thick sheets of aluminium by hand and strategically drilling the holes with precision. With the addition of some calculated spacers I surprisingly assembled the bike in around 30 minutes just like a meccano kit. With two nights until the reveal, the bike still had no wiring or fuel system.”

“Yes I did receive strange looks when asking
for the biggest syringes they had at the chemist.”

“One night was spent teaching myself how to wire a motorbike and the last night was spent wandering through the aisles of my local hardware store searching for ideas for a tank. As the intention was to only make it around the block (roughly 2kms), large diameter copper tubes from the plumbing section would have to do to feed the deliberately long fuel lines. The backup plan was to carry a syringe full of fuel to pump into the lines when the engine started coughing. Yes I did receive strange looks when asking for the biggest syringes they had at the chemist.” “After another sleepless night spent in the garage the bike fired up just an hour before the big reveal. A quick, wobbly test ride a few metres out of the garage and into the back of the ute was all I got before the Rusty Kustoms race was underway.

Names where drawn out of a hat and it came up to my turn for a nervous run of the course. There was a steep learning curve to riding the bike. At slow speeds, legs dragged along like training wheels as the bike flopped around due to the un-functional rake, but with a full twist of throttle it tucked nicely into a straight line and is an eye opening ride to say the least – chin on the front wheel and your bum inches away from being sucked into the back tyre, it’s enough to get your heart pumping! Against all odds, with the ‘tank’ taking just 150mls of fuel I managed to get a full 2 laps of the course – with just enough left over for a celebratory burnout.” THAT’S why there’s no seat…

“The Rusty Customs guys put on another great event complete with a detailed course, finish line and entertainment. The event was a huge success and I would encourage anyone to have a go at the next one.” “The build process took around 4 weeks. Since the build off I have polished and painted a few things and ridden the bike at a few events. The bike will never be finished – I could sink countless hours into improving various aspects of the bike – but it’s time to hang it in the rafters and move onto new projects.” (Shot by Chris Pearce at Dimension Studios, with much help and brylcreem from Stephen Broholm.)