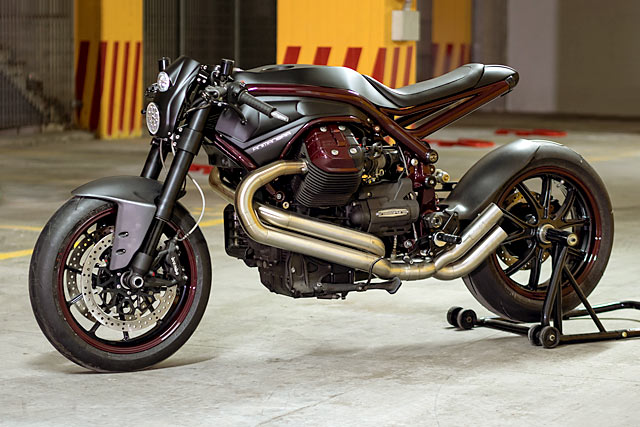 When life is good, the money is flowing and you call Monte Carlo home, it’s easy to get caught up in the glitz and glamour of it all. So when the sun goes down in this special part of Monaco and the casino doors are open, it would be hard not to strut towards the lights. Instead, one lucky man chooses not to get his thrills at the roulette wheel and instead plays for the dark side. Ladies and gentlemen, climb aboard a crazy carbon creation, Anima Nera, from the Moto Guzzi Gods at Italy’s Officine Rossopuro. It started life as a new Moto Guzzi Griso 1200 8V, but when Filippo Barbacane had finished working the magic of his dark art it had well and truly earned the name ‘Black Soul’. There are many reasons we become fans of a particular brand of motorcycle, sometimes it’s as simple as following in our father’s footsteps. But for whatever reason it is that Filippo decided that Moto Guzzi would be his marque, the rest of us can only rejoice as he’s built some of the best the world has seen. With a call from a Monte Carlo customer it was time to find some new inspiration and he turned to an old friend. “Many years ago I built a motorcycle called Anima, it was one of the first extreme specials based on a Moto Guzzi, with 1100 2v engine and a Ghezzi & Brian frame. I liked the idea of making a new ‘Anima’, a bike that had the colours exactly opposite my first one.” Instantly the change to a dominant black hue would give this machine a darker soul, but it’s the overall design and execution that make it bad to the bone. As Filippo explains “My idea was to build a very short and aggressive bike, very light first of all.” That meant removing all the factory bodywork and taking a grinder to the frame. The tubular twin cradle chassis hangs the motor from its backbone, but behind the engine everything else has been cut away. Then using tubular steel that matches the front cradle Filippo crafted a custom subframe, that’s short, stunning and straight to the point. With the bulky plastic bodywork removed the Officine Rossopuro boss shaped his own designs from metal to be used as moulds. From the tiny tail-piece, to the side covers and the tank cover he then expertly crafted each piece from lightweight carbon fibre. Under the carbon the tank is also his own creation, desperate to save every kilogram he hand formed the entire unit from aluminium. As the overall shape began to emerge Filippo could see a devilish racer emerge and the raw carbon front fender and rear hugger fit the brief to perfection. His limitless imagination still working overtime he refused to succumb to “just” a single headlight. So with more carbon in hand he sculpted the face so that even with twin headlights this Guzzi always wears a scowl. With the dark energy now radiating out the goal of a lightweight machine to help radically improve the performance also meant stepping things up in a big way in the areas suspension and braking. There is nothing at all wrong with the stock, fully adjustable 43mm USD forks, but everything can be improved. For the task he selected a set of Marzocchi 50mm fork legs, a perfect match given the bike now carries its weight further forward. But these are no bolt on replacement; so with his infinite skills Filippo designed and machined a custom set of billet triple trees. You’d think a set of big radial mounted Brembo brakes would be good enough, they are for most, but not our man in Abruzzo. He’s swapped the rotors out for Brembo’s incredible T-Drive rotors that have been designed for MotoGP and WSBK. Lightweight, incredible stopping power and technology that ensures a full floating action in both radial and axial directions; fancy! To further reduce unsprung weight a set of aluminium Marchesini wheels got the nod, with more Filippo magic required for them to fit the rear-ends shaft drive. All wrapped up in new Pirelli Diablo Supercorsa tyres, very few Moto Guzzi’s on earth have this level of handling and stopping prowess. Of course with all those pounds shed the only way to improve the power to weight ratio is to add more ponies. The 1200cc, 8 valve engine is a torque monster from the factory but it’ll rev harder than Milwaukee’s V-Twins and more top end is just a few breathing modifications away. The first of these was to remove the restrictive factory airbox that doesn’t have the sheer capacity for power and allow the throttle bodies to breathe unimpeded via a pod style filter. Then Filippo turned to his friends at Mass Moto who have spent considerable time in R&D creating an exhaust system to deliver maximum performance from the Griso engine. Filippo also uses each custom build to add to his growing parts catalogue, available to purchase through the Officine Rossopuro online store. The lightweight alloy cardan bar fitted to this black soul is one of many of those items along with the machined alloy oil cooler cover. Looking cool while saving weight is also the purpose of the new wiring loom that incorporates a plethora of Motogadget parts with Rizoma turn signals. Joining them on the new clip-on bars is a set of Brembo radial master cylinders for both brake and clutch. While the fully adjustable footpegs are another machined alloy part that look the business and save weight, straight from the online store. It’s a business model that serves Filippo and his brand well, enabling the use of each big dollar custom build as a development vehicle to ensure all his customers enjoy the benefits. Test riding Anima Nera, Filippo couldn’t believe just how well the bike now performed. It was no longer a lumpy sports cruiser, but instead a radical lightweight creation that’s got the torque to pull a stump out of the ground and that can change direction on the front wheel in the blink of an eye. Then all that was left to do was deliver the bike to his client in Monte Carlo, “where I hope to enjoy the beautiful beaches of the long sea and why not the Formula 1 circuit.” A holiday well deserved for the master that is all things great about Moto Guzzi.