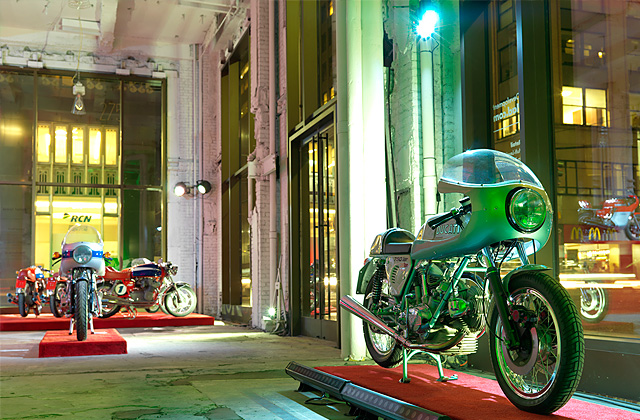 Imagine for a second that you’ve made it. Whether it be through sheer luck, hard work or divine skill, you’ve reached a point in your life where you have everything you’ll ever need – maybe even a little more. So you indulge your passion. Now this could mean pretty much anything depending upon who you are, but as you are right here at the House of Pipes then there’s a good chance that it involves two wheels. It certainly did for New York’s Stuart Parr, albeit with a decidedly Italian spin on things. And ten years later, he’s kindly showing the world the Frutti of his labour at a local gallery. He’s calling it the ‘Art of The Italian Two Wheel’. We’re calling it heaven. Parr’s collection currently comprises over 50 bikes, mainly hailing from Italy’s ‘60s and ‘70s.  No prizes for guessing that Stuart’s passion is for great design, then. He has a few well-known architectural creations under his belt, along with some notable film production credits, too. A storage facility in Tribeca houses the bikes on a day-to-day basis, with Parr swapping his daily ride when the mood takes him. But with most of them having to bide their time between sessions, Stuart began to toy with the idea of airing them all out in an exhibition of some sort. Parr reached out to a friend in real estate with the idea, and before he knew it he was wheeling the bikes into a vacant Madison avenue retail space that was earmarked for redevelopment sometime in the not-too-distant future. And why would you bother with over-priced fashion when you could be window-shopping for priceless motorbikes? What’s clear from the resulting show and its motorised art pieces is that no-one, and we mean no-one, does engineering quite so beautifully as the Italians. It speaks volumes as to just how they see the world – after all, why would you bother to make something functional if it wasn’t bellissimo to boot? Stuart rejects out-of-hand any offers to buy the machines. Without a though, he states that the bikes are ‘not for sale’ despite countless offers from a United Nations-esque list of interested parties. ‘I’m not breaking up this collection,’ he insists. And what a legacy the collection will be. The passion that is inherent in one man’s obsession and how that obsession manifests itself in such a beautiful collection of machinery is clear. On paper, a career in architecture and the movies should easily eclipse a weekend hobby, but who can read a piece of paper when they’re tearing down the road on a piece of Italian art?

The show will open on April 18 and stay up for three months. If you’re in NYC and you miss this, then you either need your head read or your bike license revoked. Or both. Make sure you catch it at 285 Madison Avenue, in New York’s Bryant Park district.