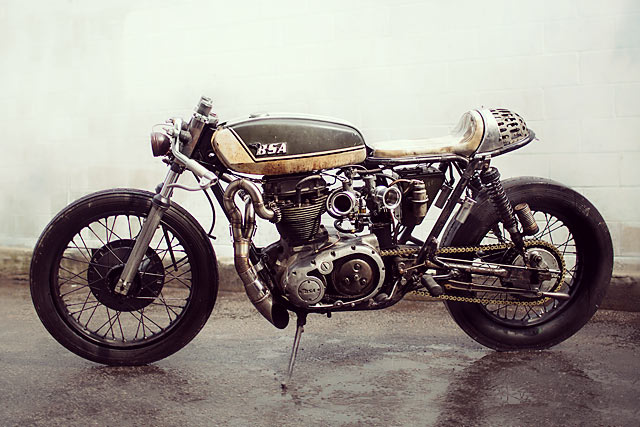 There’s a certain amount of irony in the fact that Boston’s Madhouse Motors is little more than a mile from Harvard University, as the contrast between the two couldn’t be more different. And while Harvard has a whole string of amazing medical firsts under its belt, we’ll take a bike like this over world-first kidney transplants and a cure for smallpox any day. Run by J. Shia along with an army of family and friends, they produce an esoteric range of customs and restorations, including choppers, Italian race bikes and this here BSA; a bike-meets-kinetic-art-piece they like to call ‘The Manipulated’. “Lately, we have been swamped with work,” says J. “Madhouse is a full-time repair, fabrication and custom build shop. It can be a bit nuts, but since finishing the BSA I have been able to take some time off and enjoy the summer with my kiddo’. J says that the team and her work almost every day, so it’s nice to have the company in a healthy place where they can all get a break now and then. “A few years ago, I was working in a carpentry shop. Nearly every day as I came in, I would eye a few bikes buried in the back corner that were covered in sawdust. I was constantly asking the building owner if I could buy them, specifically a ’71 BSA A65”. When J moved locations, she asked one more time and he finally said ‘yes’. “I brought it to my shop’s storage unit and didn’t touch it until committing to doing a build for Sturgis this year”.

“This bike was a collaborative effort with my build partner, Michael Ulman. The bike was inspired by the excitement of learning each other’s working styles, skills and blending them to create a single piece of work. We wanted to make a machine that perfectly represented both of our artistic aesthetics”.

J started with a handful of preliminary drawings. Then, when Michael came on board, they spent a week sketching up some plans before really tearing into the bike. “Like most builds I do for customers, I addressed the stance of the machine first. And because this bike was a personal project, we set the stance and riding position to fit my body”. [superquote]“We found ourselves making nearly everything out of unused parts, metal scrap and other objects from around my shop”.[/superquote]

“Factoring in the timeframe and a hilariously slim budget, we found ourselves making nearly everything out of unused parts, metal scrap and other objects from around my shop and Michael’s studio”. J would pitch ideas, they both would draw them and then they would use these found objects and repurpose them into functional parts of the machine. “The rear cowl is a piece from a Boston drain. The primary chain and secondary drive are lubricated by chainsaw and hand pump oilers. The subframe and carb manifold tubing is made from chamfered handlebars. The exhaust is from 3 different pipes. The shift linkage is from an old Volvo and the brake arm and pull start are antique bolt cutter arms. We liked the idea of showing the build process, so we kept all the welds exposed and the patina as is”. J says that the hardest part was the timeframe, as they were notified of the invite to Sturgis only a few months ago. “We wound up having around 60 days to tear down and rebuild the whole bike. Although we woke up early and worked late, we still found ourselves down to the wire to reach the deadline”.

[superquote]“It’s also great to finally to my own project that was created as a kinetic art piece rather than a product for a customer to ride daily”. [/superquote] “What I like best about the finished bike, besides the pull start, is the overwhelming feeling of excitement both Mike and I have when we think about building more bikes like this together. It’s also great to finally to my own project that was created as a kind of kinetic art piece rather than a product for a customer to ride daily”. Needless to say, J is planning on doing a few more ‘manipulated’ builds of this style starting in the fall. We can’t wait.