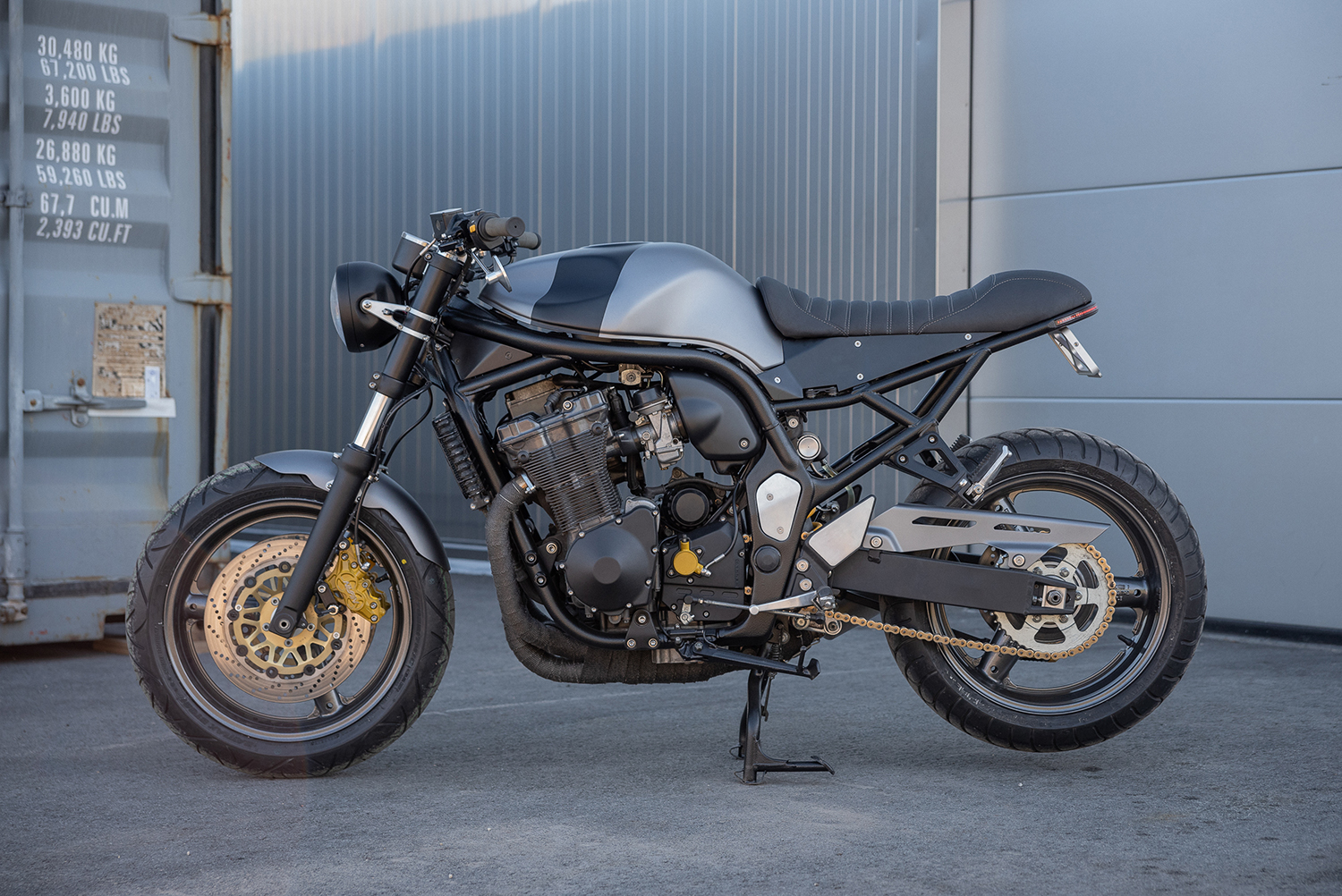 It’s one of the only memorable moments of The Godfather Part III, Michael’s “Just when I thought I was out, they pull me back in!” For Sander Ziugov the words ring true, but thankfully the sentiment is a hell of a lot different, as he was willingly drawn back to the world of custom motorcycles. More than six years ago we featured his last build, a stunning Yamaha XS400, but now having seen the world and found a new home next to a machine shop he’s back in the game. With the world shutdown, he rolled up his sleeves, rebranded as Zed Made and started producing brilliant customs again. With the machine shop owner wanting his 1999 Suzuki Bandit 1200 given the full treatment, he had Sander as a neighbour to knock it out of the park.

“I kinda drifted away from my original idea to make this bike building thing a real thing of mine and moved on to travel the world and such. When I got back home a couple of years ago, I got myself another bike and slowly started getting back into it. I ended up moving into the same facility where a friend of mine has a small machine shop,” Sander explains. With those CNC machines spinning away he wanted to learn more and being the talented man he is, it wasn’t long before he was producing a range of custom parts, from switchgear to brake reservoirs. But all the while that big Bandit was looking over at him, begging to be customised.

They’re one of the truly underrated bikes, cheap to buy, reliable and with the engine from the GSX-R1100 Superbike, the potential is unlimited. But many were trashed during the street fighter/stunt bike craze, luckily this one had survived such a butchering and gave Sander a relatively blank canvas. “Since Bandits are rather heavy and bulky donors it didn’t seem fitting to go with the cafe racer route on this one. We saw it having the best potential as an easy to ride two-seater city commuter with upright riding position and compact nimble feel to it.” Tearing into the big girl it wasn’t long before the Bandit was just a bunch of parts and nothing would go back untouched.

The frame was smoothed out and the subframe cut off and sent to the big Bandit bits of metal in the sky, that must be one hell of a pile. But rather than build a small and spindly replacement, Sander pieced together a frame matching rear that easily handles the two-up duties while looking a hell of a lot cleaner than stock. Along with the frame, centre stand, and a few other pieces it was then all finished in a textured powder that offers a neat contrast to the other parts of the same colour. Some of which are the sider covers, swingarm, and the lower legs of the front forks.

Before assembling those again ready to go back on the bike, the old springs were pulled, the smelly oil dumped out and the front end rebuilt with YSS progressive internal springs. The yokes have also been powder coated with the top yoke machined down for a cleaner look and a set of his billet risers go in to clamp the Renthal bars. Where the Bandit can get a little lazy is in the rear end, so Sander came up with a plan to sharpen up the handling by using a Kawasaki ZX10R shock that required a new upper mount to compensate for the difference in length. While the roller is finished out with rebuilt brakes and refurbished wheels that all get more tough powder.

The frame’s tubular perimeter design means fuel tank changes are an expensive exercise, so to best show off the stock curves of the factory unit, Sander hit it with a coat of flat grey that is broken up by matte black to match the colour scheme of the rest of the bike. But it’s moving rearward that required some thinking. The stock seat angles hard towards the tank, heavy breaking can be a nutcracker, so the custom seat is raised at the front for a flat effect. To cover the empty space beneath, a set of side covers were bent up and then anodized black.

Wanting to keep the bodywork clean, the huge front fender had to go and a new mould was made from which to craft another. Rather than go with fibreglass Sander opted to make it from carbon fibre, while still painting it so as not to stand out; sleek looks and no weight. So much of the build has the same feel, it’s not here to show off, just do everything well. And from the hand made chain cover to the brushed frame plates and hundreds of replacement stainless bolts, it ticks every box. The lighting is all about minimalism, the multipurpose speedo the perfect choice and the hand made number plate another touch of class CNC’d in house.

But don’t worry, he wasn’t going to give his mate back the Bandit without giving the engine a tickle. The stock muffler looks ok but is one of the biggest power thieves ever fitted to a bike, so an SC-Project can with tuned carbs and new filters unleash a bunch more ponies. While renowned for clutch problems until the last few years of the model, a new stack was fitted and 3rd gear replaced to handle the stump-pulling torque. With so many of the parts made by Sander to form part of the new Zed Made range, the badass Bandit is the perfect way to make his friend smile and show the world he’s back in the custom game and here to stay.