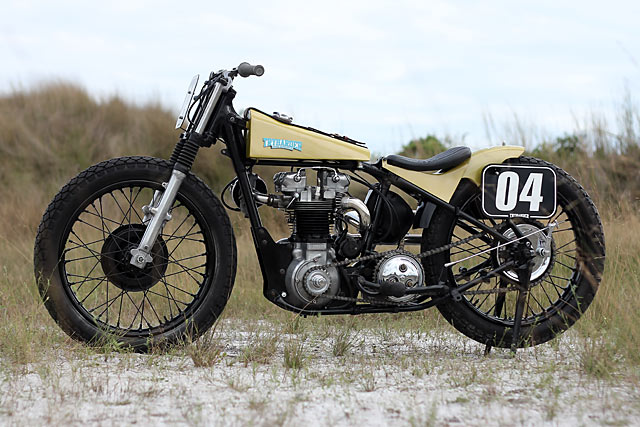 Here’s another gem we discovered on our recent trip to the bike-rich heartland of Malaysia. The Art of Speed show had a whole bunch of killer bikes; this amazing ‘Tryharder’ Triumph Tiger racer from West Malaysia’s Rotten Motorcycles was our clear favourite in the classics category. As a clean pre-unit bike with amazing lines and racing numbers we were more than sold. Then we realised that Rotten’s Wanzamani ‘Zam’ Ahmad and his crack Baganland team had gone and reversed the bike’s head as well. Rotten tries their best to build at least one new bike a year to show. “For us, it’s all about showing people just how cool older machines are,” says Zam. “No offence to fans of newer bikes, of course. It’s just that older bikes are wear our hearts lie”. It’s clear that Rotten aren’t into the business side of things, either. “It’s really just something we do for fun. There’s no shop to speak of. It’s just a bunch of friends doing what we love in our backyards”. As a real parts-bin baby, Zam says it’s hard to make a definitive call on the exact year the bike was made. “All the stuff we put together to make it was pretty much from here and there. I like to say that it’s a 500cc Tiger 100, circa ‘57”. “The reversed head was always our main inspiration and starting point for the build. You basically begin everything from the new exhaust set-up and work outwards. It’s then things really get inspirational”. And with three previous reverse heads under their belts, you better believe that they know what they’re talking about. “As for how we do it, it’s much easier to say than to do. We have people passing by our reverse head bikes and thinking it’s easy to build a racer like that. Of course, the purists will always hate us. Some even ask us why we’ve done it. The answer is simple; it’s our bike, so we feel that we can do whatever we want with it”. Still in awe of the technical chops involved in undertaking something like this, we asked Zam for the specifics. “The first step is to make sure the camshafts are identical for both the inlet and exhaust. Some later Triumph Tiger models came with different sets of camshafts for each. If this is the case, then you’ll need to switch the cams”.

“Next, the engine breather needs to be replaced with a one way-type valve. Finally, it’s time to time. This is where you will really need to know how the Triumph engine works, as the markings on the timing gear are no longer relevant, so you’ll need to find the best gear tooth to run with. This is a real trial and error process until you find the sweet spot”. For carburation on the Triumph, Zam used the Amal Concentric 900 series and tried to minimise the compression of the air on its way in. Remember, now the carb is on the frontside of the engine it will be force-fed more air, dramatically affecting the carb’s mixtures. The last step in the process is to swap out the main jets until you find the ones that give you perfect mixtures at average road speeds.

“Apart from the flipped head, the low and short frame is what we love most on the racer. Your seating position is spot on and the way it feels in the corners makes it an amazing bike to ride”.