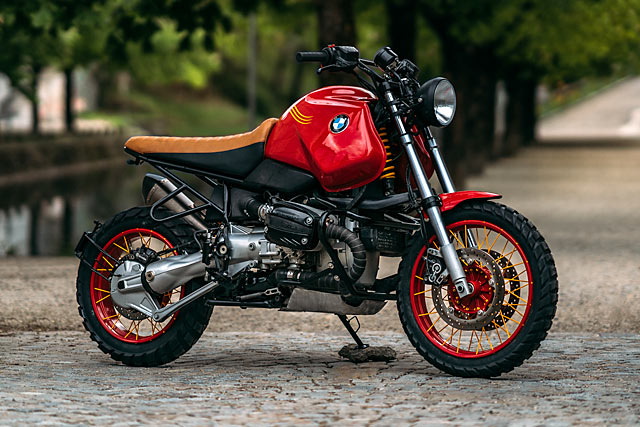 BMW’s Telelever suspension is a strange and magical beast. It’s just the sort of outside-the-square thinking that you’d expect bike builders to go for like nerds go for Axe deodorant. Created to fix a problem that no one but BMW’s designers seemed to care about, you’d think it would grab the eye of a whole heap of creative minds looking to build something really unique. But we almost never see them – until now, that is. Here’s Austria’s very talented and prodigious NCT Motorcycles with a Telelever treat they call the ‘Red Rooster’. In an unusual twist on the usual set of circumstances, Robert, the bike’s new owner turned up on NCT’s doorstep with a donor ‘01 BMW R1150 GS and a completed design in hand. As a professional illustrator, his colour skills and his eye for good-looking lines clearly help him with more than just his day job. The design of the tank and its striking yellow wings actually represent his company and its logo.

Happy with the design, NCT’s David Widmann took the opportunity to save some time and got straight to the dirty hands part. The bike was stripped back to individual components, and the structure for its new rear frame section was decided upon. Next the rims got knocked down and painted in the same colour scheme as the tank and the fender, a.k.a. Fire Truck red and Mustard yellow. On paper you’d probably scoff at the incredibly contrasty colour choices, but who can argue when the bike looks this good in the flesh? “The engine got a complete overhaul,” says David from his South Austrian shop. “There were no major upgrades and it still has the stock pipes on it, but we added a huge Akrapovic pipe.” As you do. Then Mario, NCT’s brand new Workshop Manager, rewired the BMW by hand, making sure he included a brand new M-Unit from those German Motogadget magicians. The original handlebars were then replaced with a higher set from expert tube benders, Fehling. “We kept the old instruments, but replaced the speedometer with a smaller unit from T&T. To be honest it’s not a super high-end product, but it works very well. And the tires are Metzeler Karoo 3s,” David adds. Dave notes that the hardest part of the bike build was the seat. A difficult job at the best of times, the bike’s owner measures in at well over 2 metres tall, so an extra effort was put in to ensure he was comfy come riding time. But what to do with all that extra seat hight? To stop it looking like a giant brioche loaf had invaded the bike, a two-tone design was wisely chosen to reduce its visual impact and ensure the bike’s lines were still suitably svelte. “What we really like about this BMW is that it is completely different from the cafe racers, street trackers or scramblers that we normally build. It’s hard to find a name for a customisation like this. Is there already a name for a mixture of an enduro bike and a motorcycle that is just plain great for everyday use?” Yes David, there is. We call it a Red Rooster.