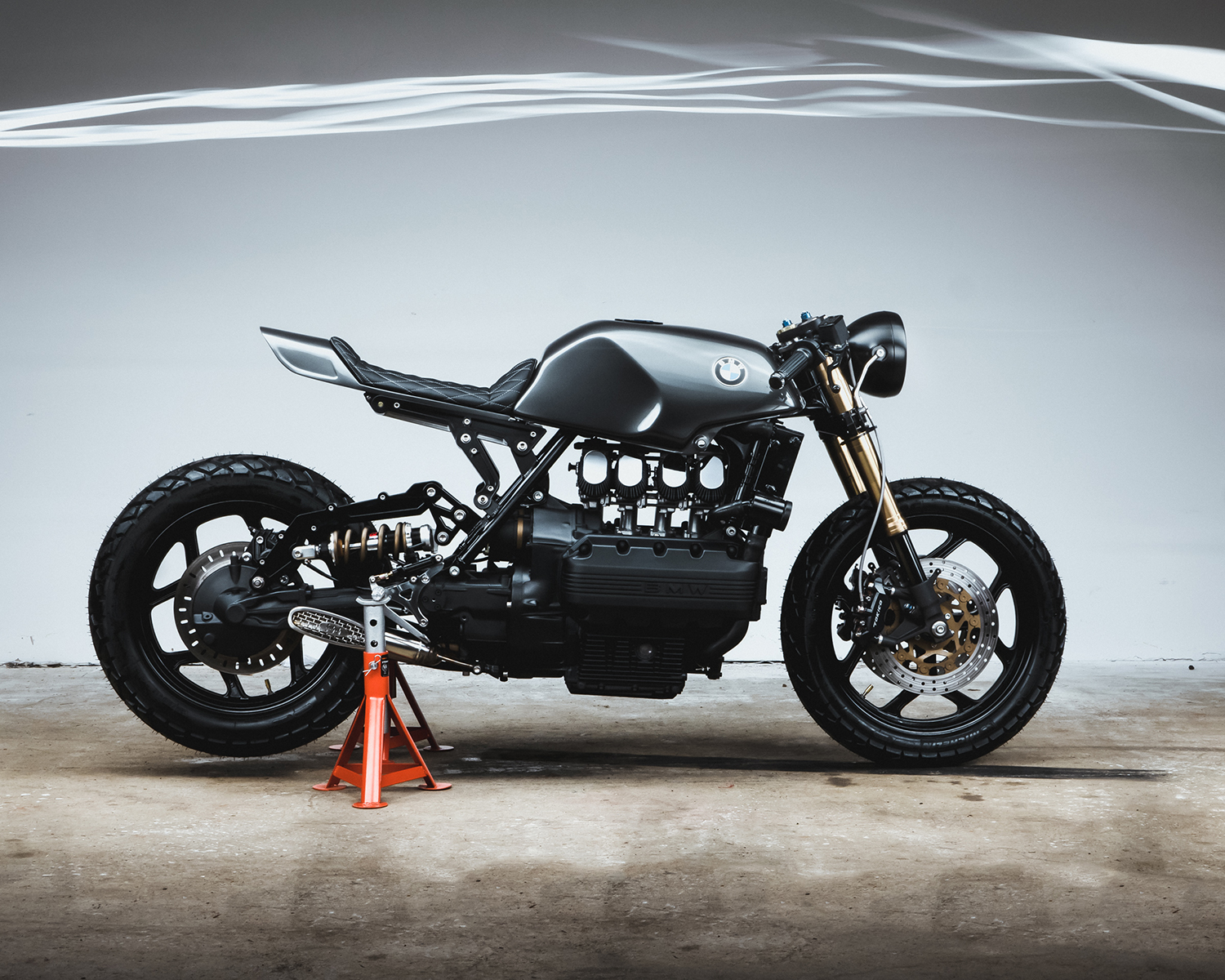 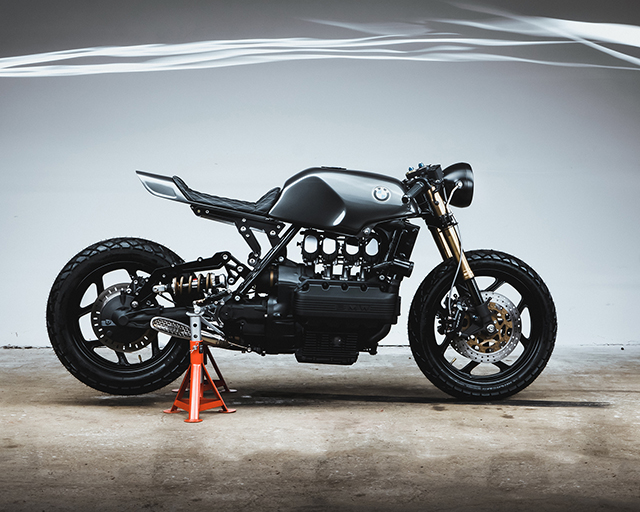 No matter where in the world you are, the likelihood is that you’re currently socially isolating and doing your part to help stop the spread of the lethal Coronavirus that is devastating countries around the globe. So although the UK’s Spitfire Speed Shop was hoping to debut this stunning bike at the now cancelled 2020 Bike Shed Show as one of the invited Pro Builds, we’re instead beaming it into your homes for your safe viewing pleasure. From a big and boxy BMW K100 they’ve stripped it down to a true minimalist cafe racer, showing off all their skills with some brilliant custom touches until the final form took shape to reveal the Kaiser, Project K. 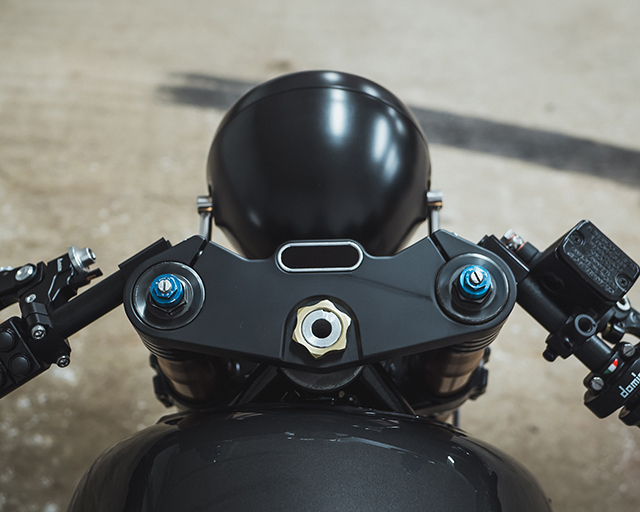 You can imagine the disappointment for Tommo and Dav from Spitfire Speed Shop having worked night and day to complete this incredible bike and set to display as invited pro builders only to have the big event cancelled; many a shop has gone onto big things after getting such an invite from the Bike Shed. But at SSS they’ve taken it in their stride and rather than worry about the cancellation, they’ve chipped in to bring everyone some cheer, offering free UK & International shipping on their range of merchandise so no one needs to venture out from their home for their Spitfire fix. 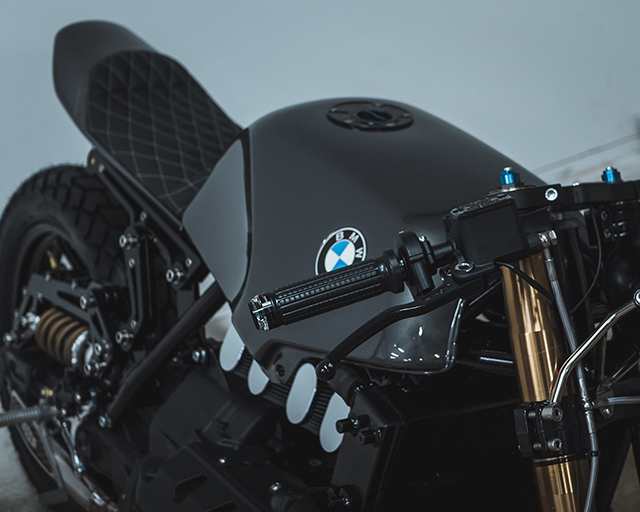 But it’s the badass K that brings all the boys to the yard and unlike their last build that we featured, the basis for this bike was a solid starter, leaving no hidden surprises when they pulled it apart. “The full teardown of a good solid base bike was done and the parts were straight in for some powder coat and paint,” Tommo smiles. Off to a great start and the design idea of true minimalism with high end parts meant a total rethink from front to rear. So to help they drafted in MRS Racing and experienced track rider Michael Shuker to lend a hand. 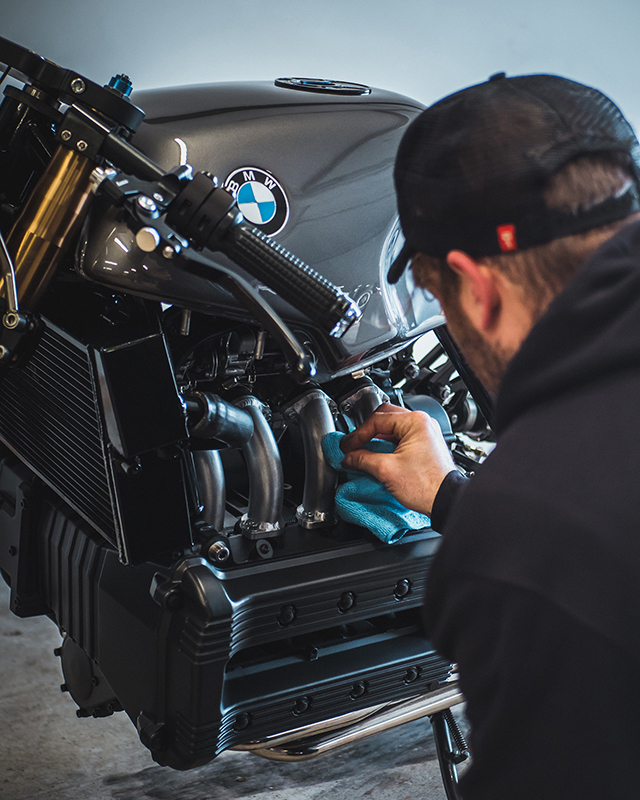 While not an uncommon conversion, the front end swap to that of a GSXR1000 is beautifully executed with a set of custom yokes to make it work. Not only do they provide drastically superior handling performance with full adjustability, but the twin disc Tokico brakes give the big BMW the stopping power it has always been crying out for. However the rear end was never going to be so simple with the enormous factory two-up seat and subframe removed they set about crafting an all new design, that would even have the conservative Bavarian engineers smiling. 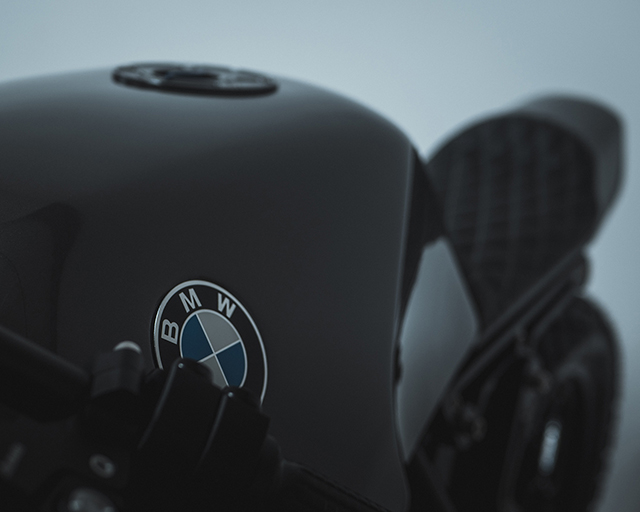 Starting the entire rear from scratch allowed the SSS boys to get truly creative and using the same styled custom pieces for the subframe as they do for the suspension linkages is unlike anything we’ve seen before. Not only does it provide a stunning uniform appearance, it brings the mono-shock system into the modern age. Built for the job the YSS adjustable shock now lays down horizontal to the swingarm, with the triangulated linkage keeping any twisting forces away from the dampening and providing the benefits of pushrod style suspension used in high-end race cars. That mix of mechanical display and negative space would normally be lost moving forward on a K bike with the engine totally filling the frame. But again looking to innovate the boys pulled out the huge airbox and clunky fuel injection and switched to a simplified carb setup. “We used Keihin side-draft carbs with custom made intake manifolds, a Domino throttle with universal cables and 4 air pods,” Tommo explains. Against the all blacked out engine, the gorgeous intake runners, chrome filters and slash cut exhaust give a great contrast to complete the look in serious style. 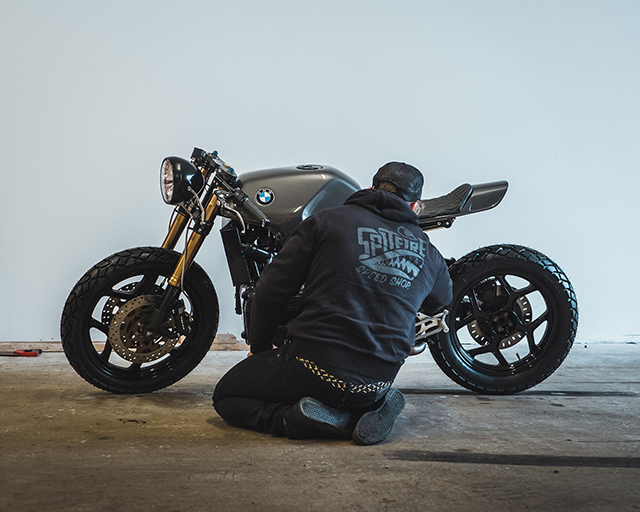 While the ECU for the fueling is ditched, the Bosch ignition side remains and like the rest of the wiring is neatly hidden in a custom crafted box under the seat. Once again the boys have gone for a full Motogadget setup to keep things clean and from the bar end indicators, blacked out switches and the perfectly recessed speedo, it all adds to the overall class of the bike. Now was not the time to skimp and the slick Dixie rearsets click the gears and operate the disc brake rear end. 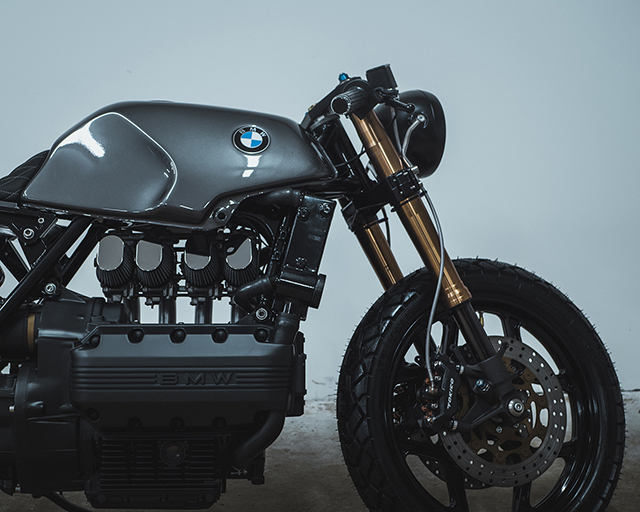 The bodywork keeps the theme flowing, from the flawlessly restored factory tank to the metal worked to perfection tailpiece that keeps the killer lines consistent. On top, the hand-formed and diamond stitched seat is all class and nothing says high end like taking your paint selection from the Porsche 911 catalogue. For a bike built to show, this is a brilliant rider and rather than simply fitting slicks to impress the crowds, the choice of sport touring Michelin rubber means this is a top quality build that loves to blast at the nearest set of corners. While they wait out the pandemic with the rest of us, the boys are shipping out that merchandise and their own blend of coffee, and we can only imagine how incredible their next build will have to be as they plan to top the ‘Kaiser’ 100! 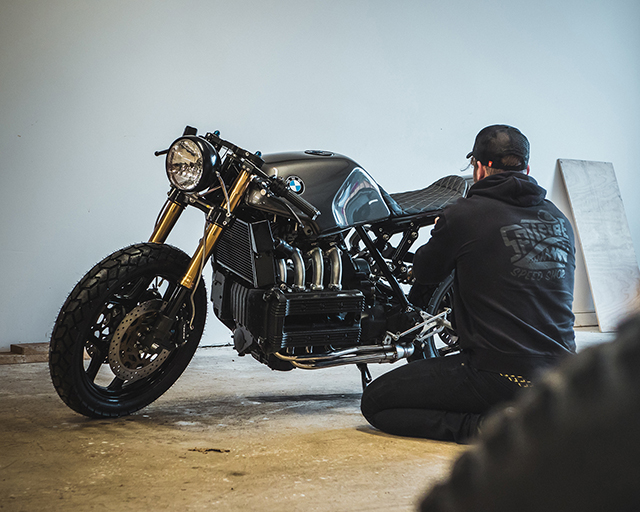