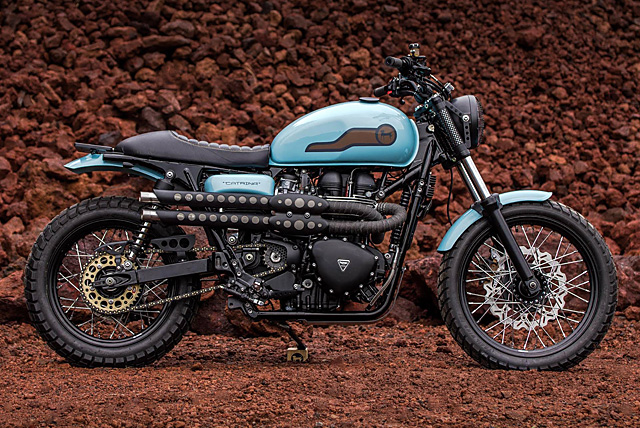 There’s a lot to thank Mexico’s Baja state for. Even with a mix of two and four-wheeled entrants, the Baja 1000 desert race and it’s legendary ‘Baja Bug’ VWs must have impressed even the most staunch cage haters. And that’s before you get into the region’s food, beaches and way laid back lifestyle. But what would you ride home once the Bug’s busted, the fresh fish tacos have run out and the cerveza is warmer than the afternoon sun? Clearly, Guadalajara’s Catrina Motosurf have faced this conundrum before, and they seem to have it sorted. Here’s their ‘Baja900’ Triumph Scrambler-based solution. “This time we started with a brand new Triumph Scrambler,” says Catrina’s Ricardo Meade. “The plan for this project was to make a bike that would be capable of riding through the Mexican Baja region, but to also to have something nice to get you around the city.” Looks-wise, Ricardo was keen on a retro style that was elegant and a little bit aggressive at the same time. Sounds like heaven to us, or maybe like a girl we once knew… Ricardo kicked things off by cutting the bike’s rear frame and shaving off the passenger foot pegs. This was quickly followed by the binning of the original (and very heavy) muffler. Ricardo got onto the tools and made up some custom ones which clearly set the tone for the rest of the build, especially with the holes that were added to the original heat shields and the stainless steel screen placed behind them. The headers were then wrapped. “What can I say?” says Ricardo. “I like the look.” And in this case, we tend to agree. “We changed the original headlight for a J.W. Speaker unit that we put inside a Boneville’s headlight case. It was modified to fit perfectly and then we added a stainless steel grill and a new set of brackets to hold it all in place.” Next, Ricardo moved the regulator, and the ignition key was relocated from its original front suspension location to the frame of the bike. The sprocket cover was cut back for weight savings and looks, and a new chain and rear Renthal sprocket were added on. “For the seat, we made a custom metal seat pan, and then we shaped some new foam until we had the overall lines we wanted. Then we finished it with some quality black leather upholstery.” A new metal front fender has now been placed under the original bracket, and the rear fender was cut and reshaped to better suit the overall look. A small but useable aluminum luggage rack was CNC’d up and placed on top of the rear fender. “And to simplify the rear end of the bike, we used ‘Club S’ Rizoma turn signals that also work as brake lights.” “The handlebars were replaced by a Renthal unit for the road, with a similar shape to the original but much lighter and stronger. The indicators were also simplified by using a ‘Motogadget Tiny’ that sits on top of a custom-made aluminium CNC’d bracket, and we also installed a Motogadget Push Button on the left mirror bracket.” Also changed was the brake fluid reservoir, with the factory item being swapped out for a smaller one. “Then to enhance the front, we replaced the original disc with a floating wave rotor.” The way it complements the Rental at the rear is quite cool, too. With all the hard stuff done, Ricardo moved on to the final touches. “The levers and foot controls were then powder coated, along with the side stand, the ‘carburetor’ covers, the fuel tank cap and headlight brackets and case.” The paint scheme was inspired by the 70’s surf culture and a real British icon – the Mini Cooper. “We weren’t really sure about the idea, but it was a risk worth taking in the end. We think it turned out well,” notes Ricardo. And apparently the original plan was to have a brown seat on the bike, but it was agreed that the almost-finished bike was really screaming out for a black one. Giving us his final thoughts, Ricardo smiles and says “the bike rides and sounds great. It’s also lighter and much more comfortable that it was before. We think it’s lost around 20kgs (or 44 pounds). And as you can see, it also looks awesome.” We’re pretty much with you on that one, Ric. But just to be sure we’re on the same page, how about you pass us another taco and put some more of those Mexican cerveza on ice, yeah?