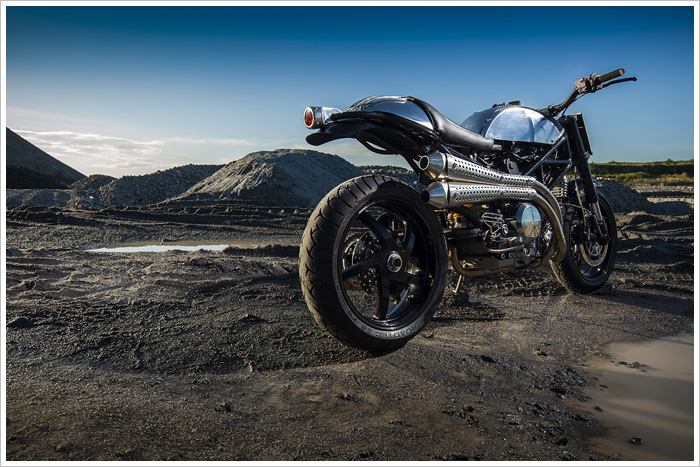 Cops and donuts. Politicians and corruption. Musicians and drugs. Benjie Flipprboi and café racers. Some things are just synonymous with each other. So when Benjie from Benjie’s Café Racers (BCR) sent us his latest project, we presumed it would be another top class cafe racer from his garage in New Jersey. To our surprise, it wasn’t a café racer at all, it was this Ducati he has named the ‘Monster Tracker’. The bike was used by Benjie as a commuter for about a year until he got bored of its stock looks. “The bike started off as a 07 Ducati Monster S2R 800 with a little over 8K miles on it.” says Benjie. “First we were going to make it into a café racer, but we wanted to do something different for a change. We decided to take the bike apart, and turn it into a tracker/urban scrambler with a little steam punk flare.” When Benjie received the bike, the stock plastic tank was swollen and the previous owner adjusted the steering stopper all the way out so the trees wouldn’t hit the stock swollen plastic tank when you turn the front wheel. “The turning radius of the monster is small as it is” says Benjie. “The steering stopper pushed all the way out, it was hard to maneuver the bike especially in traffic. When we took the bike apart to see what we have to work with, the bike looks really nice without the huge tank, and the wide seat. So we decided to make the bike as narrow as we could just like the old school trackers.” When they were designing the new gas tank, they were having problems with the narrow tank they originally wanted. The stock air box was huge, and the stock battery location was on top of the motor, middle of the bike. “So if we made a narrow gas tank and have it mounted at the conventional location, the tank will be very small, and could only hold not even 2 gallons of gas” he says. “To get that narrow look that we wanted, we decided to make a gas tank under the seat and made it run all the way to the back of the bike. Kinda like what the what some modern adventure bikes has. With a long narrow tail gas tank, we were able to make a gas tank that holds close to 4 gallons of gas. We made the gas tank out of aluminum and shaped it to follow the tail part of the stock Monster trellis frame. We even widen the back part of the gas tank so we could hold more gas, and to give the tail part of the bike that old school cafe/tracker look. We placed the gas cap at the usual location, in front of the seat, and made a front cover out of aluminum to cover the air box, battery and other electrics of the bike. When we shaped the front cover, we followed the frame rails, and made it to look as if its the gas tank. We even added knee indents to give it that old school look.” When Benjie decided to relocate the aluminum gas tank under the seat, they wanted to make sure the seat wasn’t touching the tank. So when the rider sits on the bike, there wasn’t any excessive weight being placed on the gas tank – which would eventually cause the tank to crack and leak. They made a frame for the seat out of 1/4″ flat bar, and mounted it on the bike’s frame. They made sure there was at least a 1/4″ of space between the seat and the gas tank for safety reasons. “Once we had the frame of the seat mounted, we made a shell for the seat pan out of fiberglass” says Benjie. “Then we had it upholstered out of black leather with old style double stitch. And to protect the tail of the gas tank, and to give that rugged off road look, we made a stainless grill that wrapped around the top tail section of the gas tank.” “Since we are going for that tracker style look, we covered the front end of the bike with flat aluminum and shaped it like a MX number plate. We wanted to use this bike in the street so we put in a small headlight, mount it off center, and hand hammered an aluminum headlight ring and surrounded it with stainless bottom head screws.” To get that classic tracker look BCR chose to make a custom 2 into 2 high side exhaust. “We made the back part header run towards the front of the bike, then have it exit on the throttle side of the bike” he says. “The front header was an easy set up. We just had to make sure that front header follows the back header pipe. The whole exhaust is made of stainless with aluminum heat shield. Surprisingly with the proper foot wear, the exhaust doesn’t get that hot even in traffic.” “Fenders are made of fiberglass to save weight, and for faster time construction. We wanted to make the front fender look as light as possible, so we made the fender frame out of stainless rods, and have them mounted at the bottom of the forks. The rear fender, we wanted it to be mounted just like the old school British Scrambler. We added a round off tube at the back of the frame, and have the hand hammered aluminum tail light wrapped around the round off tube,  and then made it to securing the tail part of the rear fender.” “We didn’t do any mods to the engine other than cosmetics. The power of the stock 800cc motor is more than enough for what we had in mind for the bike. Even the wet clutch system is great especially riding the bike in the traffic. The only thing we did to the motor is we just polished the engine side covers, valve covers and cam end covers. Having them polished i think gave the V twin ducati motor some detail, and an old school look. Engine management, we added a power commander to compensate for the modified free flow exhaust and air pod filters.” “Doing this project we found out that Ducati Monsters are a great platform for any custom bike setup – be it cafe style or tracker/scrambler. Overall we are very happy with how this project, ‘Monster Tracker’, came out.  The bike is now lighter and narrower, and a lot easier to handle. Plus with all the custom parts that we did, we were able to make the parts mount on to the bike without making any modifications to the frame. In the future we might change the tires to a more rugged enduro tracker type tires.”

If this is what Benjie creates when he dabbles in something other than café racers, then lets hope he experiments more often. Don’t you agree?